Miss Congeniality plays on a lot of themes of femininity and how women are expected to behave in society. Gracie Hart is a rugged FBI agent who goes undercover as a beauty pageant contestant. In this scene, Gracie gives a monologue about the stereotypes of beauty pageant contestants and the personal beauty she has found in each woman she has met during the pageant.

“Well, I would say that I used to be one of them. And then I came here and I realized that these women are smart, terrific people who are just trying to make a difference in the world. And we’ve become really good friends. I mean, I know that we secretly wish the other one to trip and fall on her face, but oh, wait a minute, I’ve already done that! And for me, this experience has been one of the most, rewarding and liberating experiences of my life.”

Miss Congeniality is about an F.B.I. Agent who must go undercover in the Miss United States beauty pageant to prevent a group from bombing the event.

Julia Roberts won an Oscar for her performance as Erin Brockovich, a working single mother of three kids who don’t put up with anyone’s crap. In this scene, Erin and the law firm she works for discuss a settlement with Pacific Gas and Electric Company after they have been polluting the water in Hinkley, California, and the company offers a low amount in compensation.

“Oh, see, now that pisses me off. First of all — since the demur, we now have more than four hundred plaintiffs…and “let’s be honest”, we all know there’s more out there. Now, they may not be the most sophisticated people, but they do know how to divide, and twenty million dollars isn’t shit when it’s split between them.”

Erin Brockovich is about an unemployed single mother who becomes a legal assistant and almost single-handedly brings down a California power company accused of polluting a city’s water supply.

Viola Davis has a reputation for delivering dramatic emotional monologues. In Fences, Viola plays the persevering and loving Rose as she puts up with her husband, Troy, antics. This monologue is the moment Rose tells Troy exactly what she’s been putting up with all these years.

Fences is about a working-class African-American father who tries to raise his family in the 1950s while coming to terms with the events of his life.

7. Meryl Streep in The Devil Wears Prada as Miranda Priestly

The Devil Wears Prada is one of Meryl Streep’s most beloved performances. She plays the role of Miranda Priestly, the editor-in-chief of a fashion magazine who is also cold as ice. In this scene, Miranda gives a long speech to her new assistant, played by Anne Hathaway, who doesn’t take fashion seriously.

“This ‘stuff’? Oh, ok. I see, you think this has nothing to do with you. You go to your closet and you select out, oh I don’t know, that lumpy blue sweater, for instance, because you’re trying to tell the world that you take yourself too seriously to care about what you put on your back. But what you don’t know is that that sweater is not just blue, it’s not turquoise, it’s not lapis, it’s actually cerulean.

“You’re also blindly unaware of the fact that in 2002, Oscar de la Renta did a collection of cerulean gowns. And then I think it was Yves St Laurent, wasn’t it, who showed cerulean military jackets? And then cerulean quickly showed up in the collections of eight different designers. Then it filtered down through the department stores and then trickled on down into some tragic ‘casual corner’ where you, no doubt, fished it out of some clearance bin.”

The Devil Wears Prada is about a smart but sensible new graduate who lands a job as an assistant to Miranda Priestly, the demanding editor-in-chief of a high fashion magazine.

Rosamund Pike gave a chilling performance as Amy Dunne in Gone Girl. Amy was cold and calculating but still managed to deliver a monologue that was relatable to women everywhere. In this scene, Amy narrates her experience being married to Nick Dunne.

“Cool girl. Men always use that, don’t they? As their defining compliment. She’s a cool girl. Cool girl is hot. Cool girl is game. Cool girl is fun. Cool girl never gets angry at her man. She only smiles in a chagrin-loving manner and then presents her mouth for f***ing. She like what he likes. So, evidently, he’s a vinyl hipster who loves fetish monger. If he likes girls gone wild, she’s a mall babe who talks football and endures buffalo wings at Hooters. When I met Nick Dunne, I knew he wanted a cool girl and for him, I’ll admit, I was willing to try.”

Gone Girl follows a man after his wife disappears and is put into the spotlight by the media who suspect that he may not be innocent.”

Hidden Figures tells the true stories of the black women who worked at NASA during the Space Race in the early 1960s. Taraji P. Henson plays Katherine G. Johnson who was a real-life mathematician and physicist who calculated the trajectories for some of NASA’s most important missions. In this scene, Katherine lets out all of her frustrations about the discriminatory practices she’s faced at work.

“There’s no bathroom for me here. There is no bathroom. There are no colored bathrooms in this building. Or any building outside the West Campus, which is half a mile away. Did you know that? I have to walk to Timbuktu just to relieve myself. And I can’t use one of the handy bikes. Picture that, Mr. Harrison. My uniform. Skirt below my knees, my heels, and a simple string of pearls. Well, I don’t own pearls. Lord knows you don’t pay colored enough to afford pearls! And I work like a dog, day and night, living off of coffee from a pot none of you wanna touch! So, excuse me if I have to go to the restroom a few times a day.”

Hidden Figures tells the story of a team of female African-American mathematicians who served a vital role in NASA during the early years of the U.S. space program.

Marriage Story, directed and written by Noah Baumbach, is a heart-wrenching drama that depicts how painful the resolution of a marriage can be. Laura Dern plays a divorce lawyer who represents Nicole, played by Scarlett Johansen, in the film. In this scene, Nora gives a monologue about the unfair expectations of men and women in relationships.

“People don’t accept a mother who drinks too much wine and yells at her child and calls him an asshole. I get it. I do it too. We can accept an imperfect Dad. Let’s face it, the idea of a good father was only invented like 30 years ago. Before that, fathers were expected to be silent and absent and unreliable and selfish and we can all say that we want them to be different but on some basic level we accept them, we love them for their fallibilities. But people absolutely don’t accept those same failings in mothers.”

Noah Baumbach’s Marriage Story is an incisive and compassionate look at a marriage breaking up and a family staying together.

3. Ellen Burstyn in Requiem for a Dream as Sara Goldfarb

Requiem for a Dream is one of Darren Arofonosky’s most popular films as a harrowing cautionary tale about addiction and its devastating effects. Ellen Burstyn plays the role of Sara Goldfarb, a grieving widow who becomes addicted to diet pills. In this scene, Sara reveals her motivations for losing weight to her son.

“I’m somebody now, Harry. Everybody likes me. Soon, millions of people will see me and they’ll all like me. I’ll tell them about you, and your father, how good he was to us. Remember? It’s a reason to get up in the morning. It’s a reason to lose weight, to fit in the red dress. It’s a reason to smile. It makes tomorrow all right. What have I got Harry, hmm? Why should I even make the bed, or wash the dishes? I do them, but why should I? I’m alone. Your father’s gone, you’re gone. I got no one to care for. What have I got, Harry? I’m lonely. I’m old. Ah, it’s not the same. They don’t need me. I like the way I feel. I like thinking about the red dress and the television and you and your father.

Requiem for a Dream tells the story of the drug-induced utopias of four Coney Island people who are shattered when their addictions run deep.

Little Women is a well-known story written by Louisa May Alcott. It was adapted to film seven times since 1917 and the most recent version has Saoirse Ronan playing Jo March, the second oldest of the March sisters. In this scene, Jo has a vulnerable moment where she divulges the hardships of being career-driven as a woman in the 1800s.

“If I was a girl in a book this would all be so easy. Just give up the world happily. I’ve always been quite content with my family, I don’t understand it. Perhaps I was too quick in turning him down, Laurie. If he asked me again I think I would say yes. Do you think he’ll ask me again? I care more to be loved, I want to be loved. I just feel like women, they have minds and they have souls as well as just hearts. And they’ve got ambition and talent as well as just beauty, and I’m so sick of people saying love is all a woman is fit for. I’m so sick of it, but I’m so lonely.”

Little Women is about Jo March as she reflects back on her life and tells the beloved story of the March sisters – four young women, each determined to live life on her own terms.

1. Vivien Leigh in Gone with the Wind as Scarlett

Arguably one of the most influential female characters in cinema, Scarlett O’Hara is a force to be reckoned with in Gone with the Wind. Scarlett is as flawed as a character can be but she’s also fiercely independent and unapologetic. In this scene, Scarlett reaches her lowest point when her plantation is destitute of any crops or livestock and her slaves have left to fight in the Union army.

Gone with the Wind is about the manipulative daughter of a Georgia plantation owner who conducts a turbulent romance with a roguish profiteer during the American Civil War and Reconstruction periods. 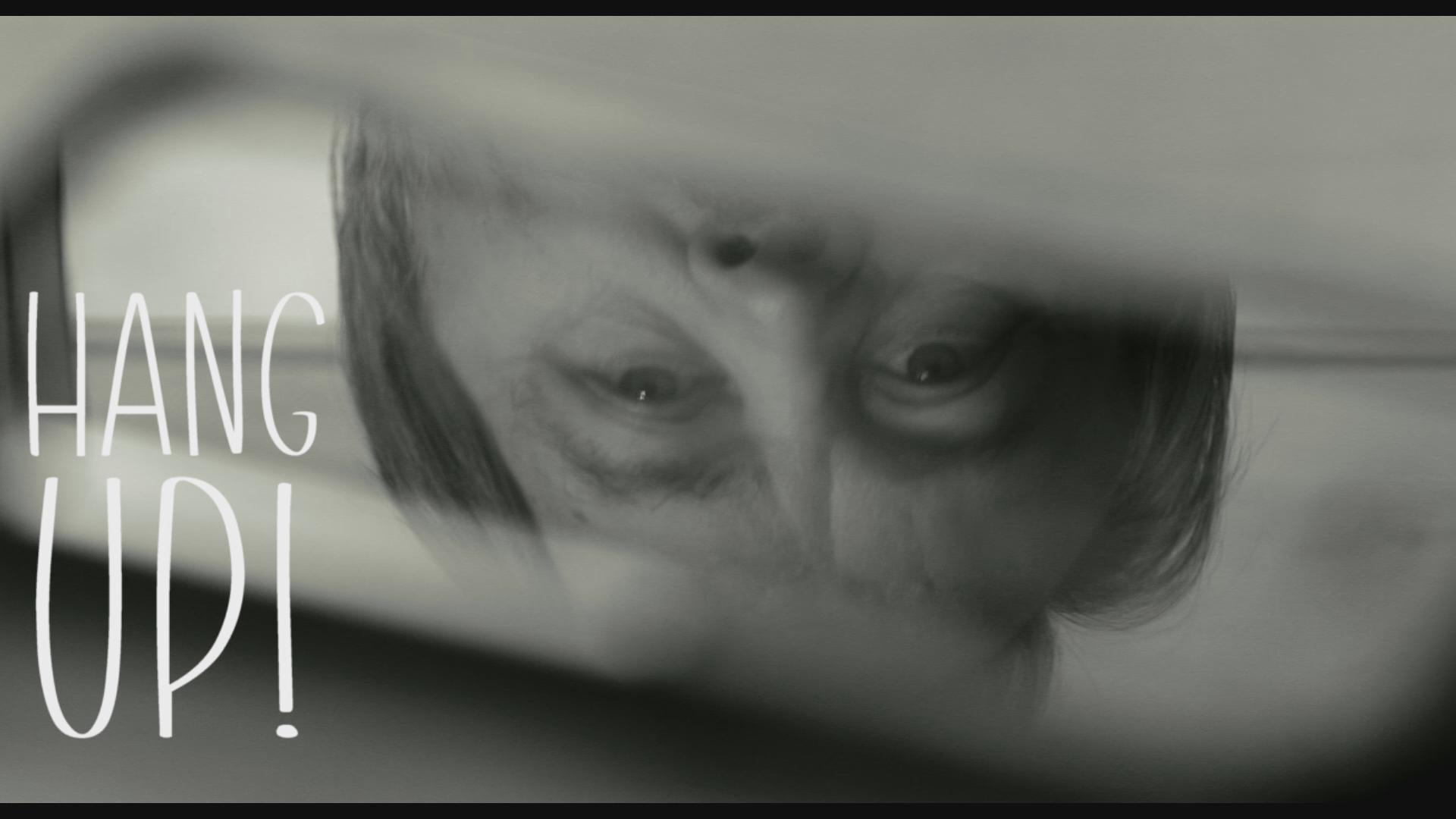 Hang Up! is a 13-minute short film that only consists of a female monologue. The monologue is a compelling story that gives us harrowing insights into her character and her relationship with her husband. The short film could be compared to Gone Girl as it manages to capture a similar level of psychological manipulation and terror perpetrated by a female psychopath. HANG UP! is about an accidental butt dial that provides a curious husband with an unexpected glimpse into the mind of his loving wife, Emelia.