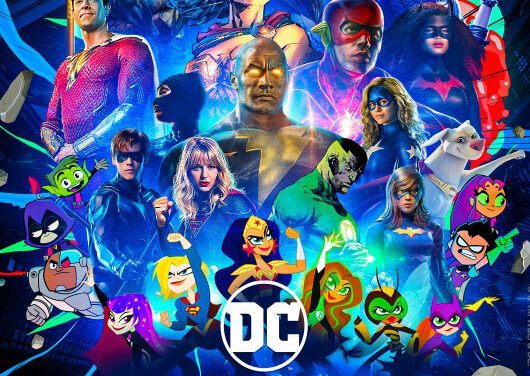 Over the weekend, DC hosted a global virtual event called the DC FanDome. In years past, DC has used this event to release highly anticipated trailers and make huge announcements. This year was no different. During the two-hour event, DC fans were treated to several new trailers for upcoming movies and TV shows. This article goes through all of the important highlights from the nearly 4-hour event.

Note: Many release dates have been moved to 2023.

The Batman is one of the most anticipated superhero movies of 2022. Fans have shown a tremendous amount of enthusiasm for the film and Warner Bros. has already announced multiple HBO spinoff shows to expand the cinematic universe. The trailer features Colin Farrell as Penguin, Paul Dano as The Riddler, Zoë Kravitz as Catwoman, Andy Serkis as Alfred, and, of course, Robert Pattinson as Batman. The film is scheduled to be released on March 4, 2022.

Dwayne “The Rock” Johnson makes his debut in the DC Extended Universe as Black Adam, the titular antihero. The plot is currently unknown but from the preview, it looks like the Justice Society of America will be heavily involved. Black Adam is being directed by Jaume Collet-Serra, who has previously worked on House of Wax and Orphan. The film is set to debut on October 21st, 2022.

Ezra Miller follows up his performance as The Flash in Justice League with a solo film. The story has not been disclosed yet, but the teaser surprisingly reveals Michael Keaton’s Batman in the film along with Sasha Calle as Supergirl. The end of the teaser has a mysterious shot with two different Flashes from different universes standing together. The shot is brief but raises many questions as to what the film will be about. The Flash is slated for a theatrical release on June 23rd, 2023.

Anyone who liked The Suicide Squad will be interested in James Gunn’s spinoff series about Peacemaker, the popular self-righteous psychopath. The series details the origin of the DC superhero so dedicated to world peace that he is prepared to use force of arms to achieve it. John Cena continues playing Peacemaker with the same humor and complexity as he did in the Suicide Squad movie. Peacemaker will be available for streaming through HBO Max on January 13th, 2022 and Season 2 has been confirmed for 2023.

Shazam Fury of the Gods is set to be released on December 16th, 2022. Although DC did not give us any trailers, they did give us a behind-the-scenes first look at the film. The BTS gives us a sneak peek into the story and the villains of the film, Hespera played by Helen Mirren and Kalypso played by Lucy Liu. It promises a film that is bigger, better, and more entertaining than the first.

The Sandman is a Netflix TV Show based on the DC comic books of Neil Gaiman. Neil Gaiman’s The Sandman is one of the most renowned comic books ever written. The story of the comic book Sandman series is complex but at its core, it’s about Dream, the personification of dreams and stories, who works to regain control of the dream world along with the power he once possessed. The Netflix series seems to take a similar approach to the series. The synopsis reads, upon escaping after decades of imprisonment by a mortal wizard, Dream, the personification of dreams, sets about to reclaim his lost equipment. Despite the confusion surrounding The Sandman’s release date, the series is set to be released in 2022.

Aquaman 2 and The Lost Kingdom

James Wan’s Aquaman is one of DC’s most successful films in recent years. Wan is back to helm the sequel, Aquaman 2 The Lost Kingdom. The first look into the sequel gives us a glimpse of what’s to come and the cast that is returning. Wan has become a master at creating a spectacle and it looks like Aquaman 2 will be no different. Aquaman 2 and The Lost Kingdom is set to release on March 17th, 2023.

Last year, it was rumored that Michael B. Jordan was creating a feature film about Static Shock. Now, the Static Shock project has officially been confirmed to be in development with Jordan as the producer.

“As a kid growing up, watching Static Shock, it was something that inspired me. And had that type of representation at a young age, it was really important to me.” – Michael B. Jordan

Randy McKinnon, who is a newcomer screenwriter, will be writing the script for Static Shock. The film will be based on the animated series which followed Virgil Hawkins who with the help of his inventive friend, fights crime as a superhero.

Ava Duvernay has led the adaptation of Naomi, a DC comic book series about a female African American metahuman. The series will be a part of the CW Arrowverse with supposed cameos from other known heroes. In the teaser above, there is a brief glimpse of Superman. The series airs in May 2022.

After a season of bad-performing movies like Suicide Squad and the theatrical version of Justice League, these announcements mark a new era for DC Entertainment. One where they are more proactive with their characters and original stories. With this slew of upcoming movies and TV shows, it’s clear that this is only the beginning.