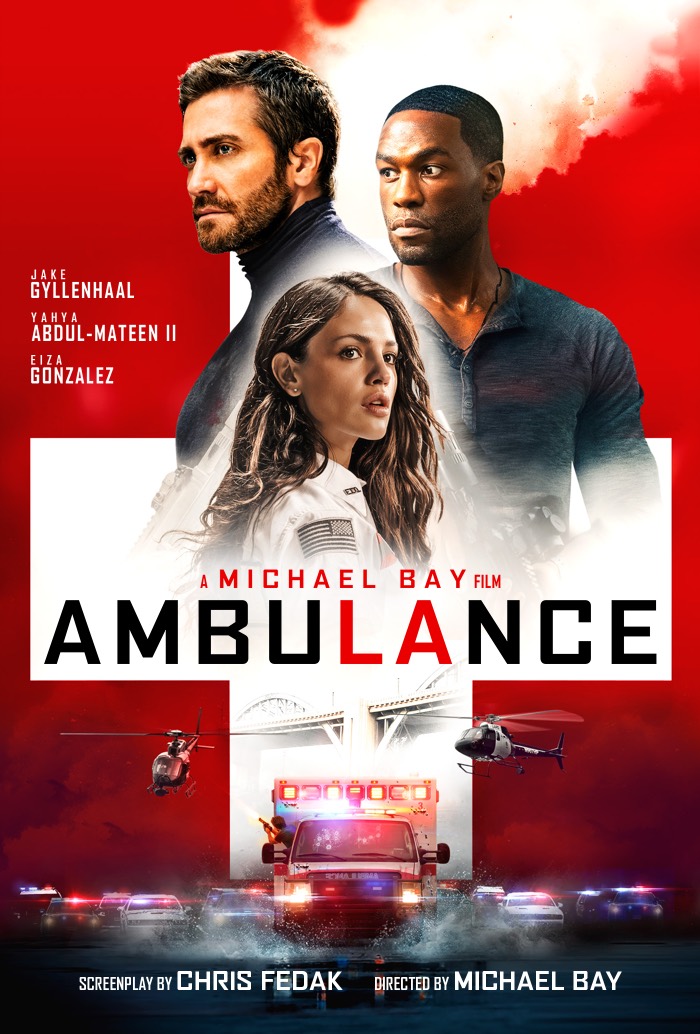 Ambulance is one of Michael Bay’s most serviceable action films in years.

Ambulance feels like a distilled Michael Bay movie. It takes the best elements of his action filmmaking styles and filters out most of the garbage that comes with them. Most obnoxious characters, blind racism, low-brow gags, and politically incorrect writings have been chucked to the curb. What we’re left with is a film that does a better job reminding the audience of what Bay does best, centering around his penchant for staging big, loud, and intense action sequences.

The story is posed as a heist operation for some desperate fellows. Yahya Abdul-Mateen II plays Will, a Marine and Afghanistan veteran who has fallen on hard times. With a sick wife and baby in need of care, Will is out of work with no benefits and needs a way to make a lot of money fast. As his last option, he seeks the help of his brother Danny (Jake Gyllenhaal). Danny specializes in dangerous heist operations and could use a skilled driver like Will on his crew. What starts as a bank robbery soon goes awry with a shootout on the streets of Los Angeles. After some chaos, a chase is on where Will and Danny take control of an ambulance. Inside that ambulance are their hostages, the EMT Cam (Eiza González) and the wounded cop Zach (Jackson White).

The majority of the film is a high-speed chase through the streets of LA as the EMT struggles to keep the cop alive. Bay’s direction of these many chases is remarkable, using drones to stage the more free-flowing shots that zoom around freeways and city streets. Having these many angles makes the many scenes of crashing and exploding cop cars incredibly eye-popping. The shots also never feel as overly busy with excessive chaos as Bay’s previous films, always keeping the center focus on the ambulance and the cops, rarely diverging or getting lost in meaningless pillow shots. Even Bay’s most common shots of keeping the camera low and spinning have been reduced here, perhaps because the director became more infatuated with shooting from above which is honestly a breath of fresh air.

The acting by Yahya Abdul-Mateen II and Jake Gyllenhaal is on point with both actors throwing plenty of angry grit into their roles. It helps that the screenplay by Chris Fedak doesn’t reduce them to being simplistic joke characters. You really feel for the plight of Will and grow genuinely terrified of Danny the most dangerous the chase becomes. There’s rarely a moment of ridiculous dialogue that reduces them to misfiring attempts at comedy. The most we get on this front is them singing a 1980s song together to relieve some tension. It’s a decent moment of levity that feels perfectly timed considering how long the chase goes on. There’s far comedy present from the feuding FBI and LAPD agents tackling the case but even those moments feel more restrained with the humor, favoring dry over wry. Jokes about wine and white last just long enough for a quick punchline and don’t linger longer than they should.

The car chase feels like a classic staging for all the hallmarks present. You have the scenes where the robbers and law enforcement fight over the phone, the gritty shootout, the fluctuating loyalties, the brief commentary on how capitalism forces crime, etc. It’s kind of a downer that Bay’s direction and Fedak’s script don’t add much of anything new to the formula. It still has its highlights, including a bitter mafia fight with the vicious A Martinez leading a cartel, but the predictability makes one feel more they’re watching for the technical bright spots than anything all that revealing in the story.

Ambulance is one of Michael Bay’s most serviceable action films in years. Free of lackluster writing, Bay’s direction transforms a decent script into a stylish chase that holds the audience captivated for over two hours. Loaded with fine performances and exceptional sequences, it’s a great example of how Bay’s filmmaking is iconic and thrilling when he has the right tone and screenplay.