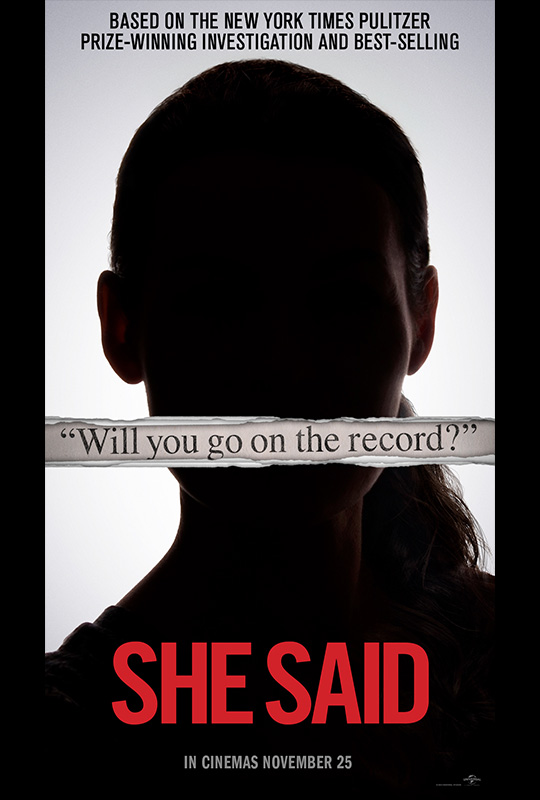 As hard as it tries to whip up journalism intensity, She Said feels like more than melodrama.

She Said (2022) Review By Mark McPherson

She Said is a routine delving into true-story journalism with a procedural tone for a meaningful movement. It’s a story where perhaps the aftermath was more entertaining than the actual process of publishing the story of Harvey Weinstein’s legacy of sexual abuse that brought about the MeToo movement. That being said, a film such as this feels essential in its procedural format highlighting journalism's importance. If not for the hard work of the writers who did plenty of work behind the scenes, we wouldn’t have the newfound awareness and reaction to sexism in the workplace the way it is now.

There were a lot of forces at The New York Times who came together to make this happen, but the most notable journalists were Megan Twohey and Jodi Kantor, portrayed by Carey Mulligan and Zoe Kazan, respectively. Kantor got the ball rolling in 2017 when she received a tip from Rose McGowan about being sexually abused by Weinstein. This eventually leads her to discover Ashley Judd and Gwyneth Paltrow have had similar experiences. And that’s just the tip of the iceberg.

Tasked with tracking down the witnesses and victims for statements Twohey, and it’s not an easy task. The film starts with the failed attempt to out Donald Trump’s sexism for his gross remarks on a hot mic that did little to slow his campaign that won him the Presidency in 2016. Those who came forward regretted the decision, and there was a sense of failure in the air that no victim would receive justice or protection for their confessions. Twohey and Kandor endure the slings are arrows that come with this investigation. This ranges from victims placing doubt in their testimonies meaning anything to Weinstein himself chewing out journalists over the phone.

The film spends just enough time with the two key women behind the article to give a sense of their personal lives. They both have children and husbands who struggle to be present but inspire them to fight longer. This leads to an awkward yet important conversation when Twohey’s daughter asks if the women her mom works with are being raped. Hearing the word come out of her daughter’s mouth for the first time is a bit of a shock. She needs to confront and not back down from it, no matter how many threats she receives from Weinstein or anonymous callers.

This very tactile movie centers most of its focus on the nuts and bolts that went into the article before clicking publish on the computer screen. There are statements to quote, victims to interview, and time spent giving Weinstein time to respond. It’s a grueling experience that requires many long nights of writing and making connections. The story grows larger and larger as the cases expand into double digits. At one point, Twohey tells her editors how one of the victims lives across the pond that it’d require hopping on a plane. The trip is validated as this story is too important to be restricted geographically.

As hard as it tries to whip up journalism intensity, She Said feels like more than melodrama. The true story is given the importance it deserves with strong performances and a laser-focus on perfecting it. It’s easy to scoff at any investigative news piece as being simple to slap a few citations on and shoot out onto the web. It’s hard to believe that the writers and editors surrounded the final article and held their breath as the mouse hovered over the Publish button. At the same time, it feels powerful considering the cultural tsunami that followed for one of the most important pieces of journalism in the 2010s.