Barbarian is certainly not going to be for everyone with its swirling of the surreal and subversion of tropes. 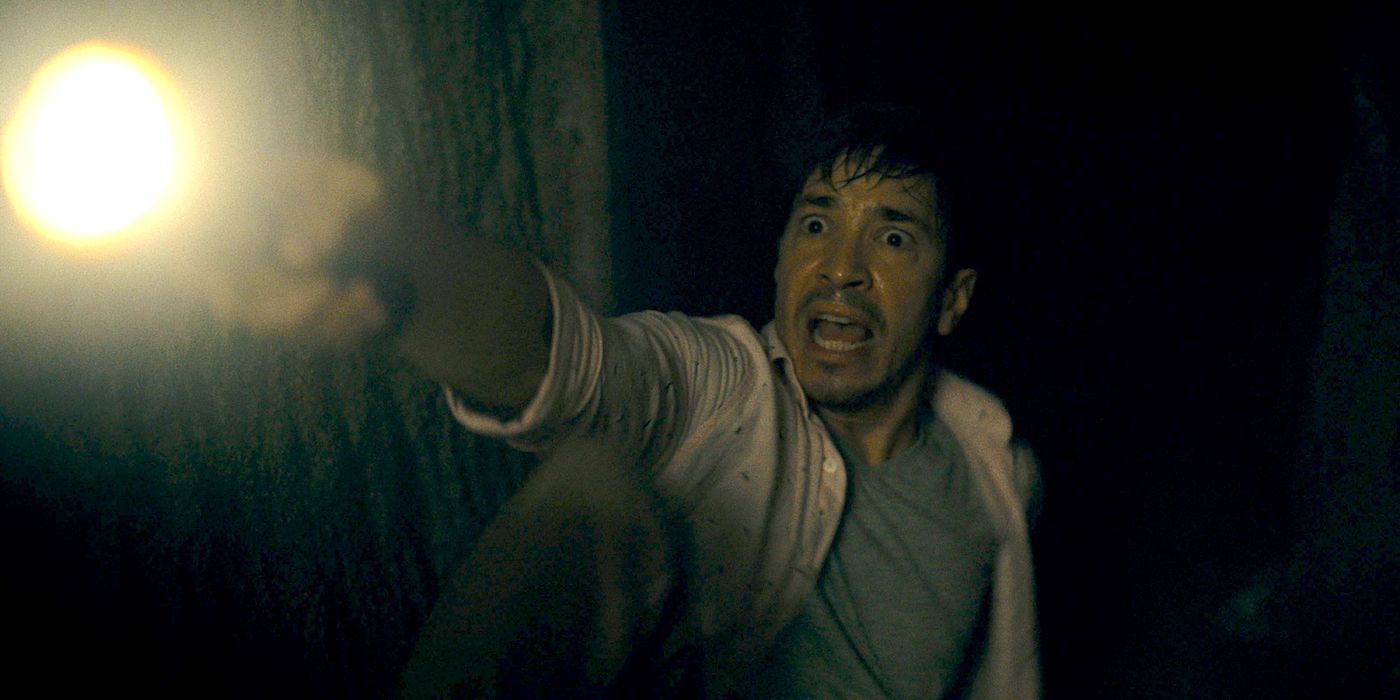 Barbarian is a fun horror film in that you’ll never be able to predict exactly where it’s going or what it’s saying. It’s a picture overflowing with subversion that you’re inclined to keep watching just to see what wild path it will take next or in what ways it will contort its themes further. What starts as a standard spooky house movie soon turns into a rousing exercise in horror tropes, flexing and bending them to find out just how weird they can be twisted.

The film starts at an Airbnb rental in a bad part of Detroit. Two customers have unfortunately booked the same day. Tess (Georgina Campbell) is visiting Detroit for a job interview. She arrives at the house already occupied by Keith (Bill Skarsgård). Trying to do the right thing on a rainy night, Keith invites Tess to stay the night, doing his best to keep his distance. He’s aware of how this looks. This is the setup for a horror movie.

It’s interesting to watch Keith try to get around looking like the creepy guy who showed up at a rental on a wrong day. He does his best to assure Tess everything is on the up and up. He’s even friendly enough to reveal his background. Everything seems to be going fine…until they go into the basement. Dark secrets are revealed by a mysterious creature that lurks in the darkest corners of the underground. It isn’t long before there’s a violent encounter and a dangerous situation where escape seems impossible.

The film has a certain juxtaposition that often leads to a tonal whiplash, stirring up humor both intentionally and unintentionally. It’s once the film adds Justin Long as a disgraced actor that the satire kicks into high gear. He’s presented as another player in this bizarre tale and embodies the worst elements of toxic masculinity. Ah, so maybe this is our central theme? Well, don’t get too comfortable. It won’t be long before the film transitions to a different point in time and reveals another dark secret of the house, relating more to motherhood and suburban terror.

The pleasure of Barbarian is that it always keeps you guessing, begging your eyes for a deciphering that won’t be handed to you on a silver platter. The build-up is beautiful, where the revelation of a basement room with a camera, bed, and blood on the wall is just the tip of the iceberg. There’s no one storyline that remains front and center, shifting from Long’s toxic tropes of a selfish man to the grotesque monster of the basement seeking maternal comfort. It feels like three wildly different horror movies were shoved into a blender and set to chop. What’s remarkable is how much of it works in terms of intensity, gore, and unpredictability.

Barbarian is certainly not going to be for everyone with its swirling of the surreal and subversion of tropes. Those who will dig it most are those weathered horror fans seeking something out of the norm and longing for a horror film that feels more like madness than the easy haunted house vibe such a picture could have had with lesser hands. It’s rare that a commercial horror film ever feels this unbound with strangeness and dread, making it an easy enough recommendation.