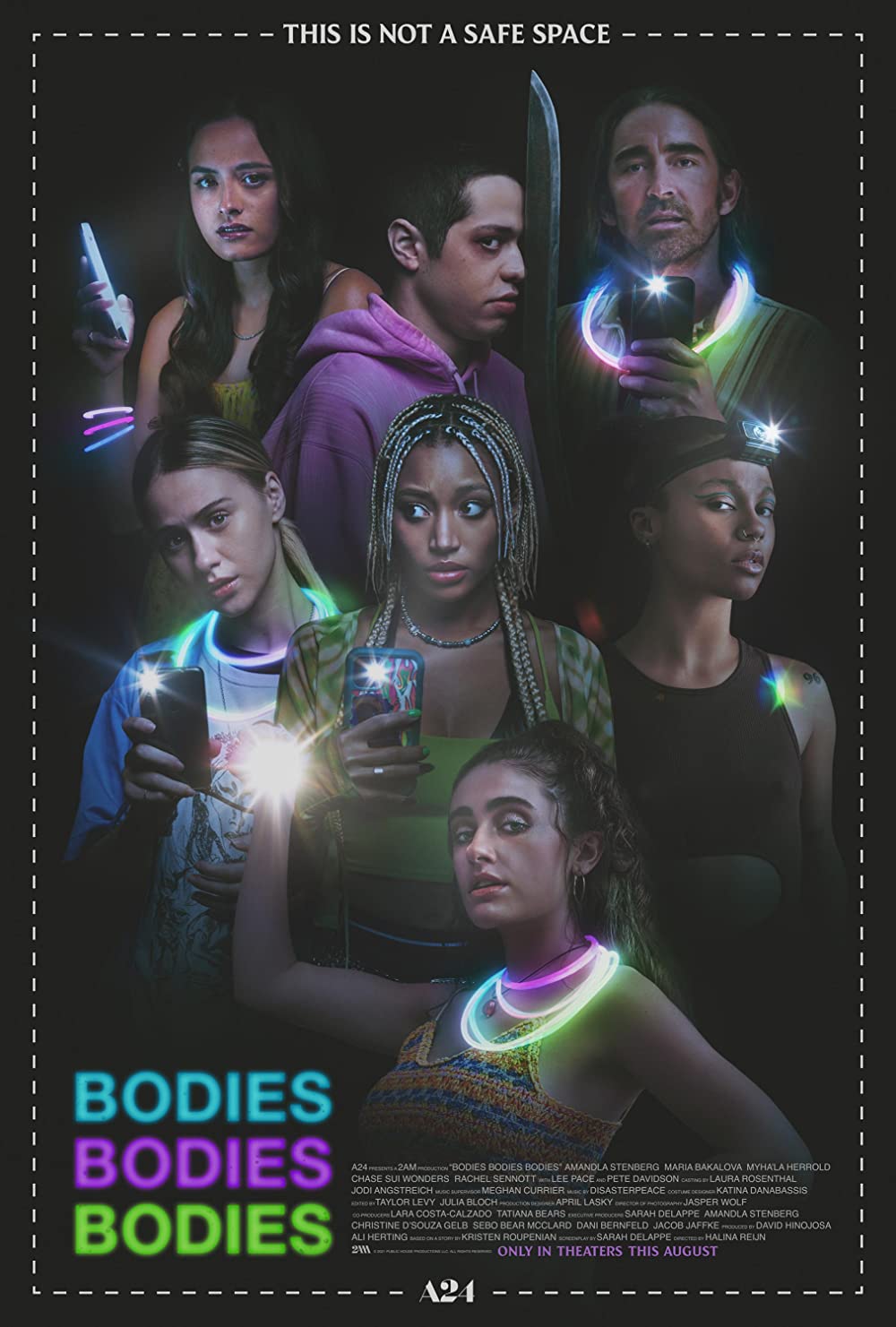 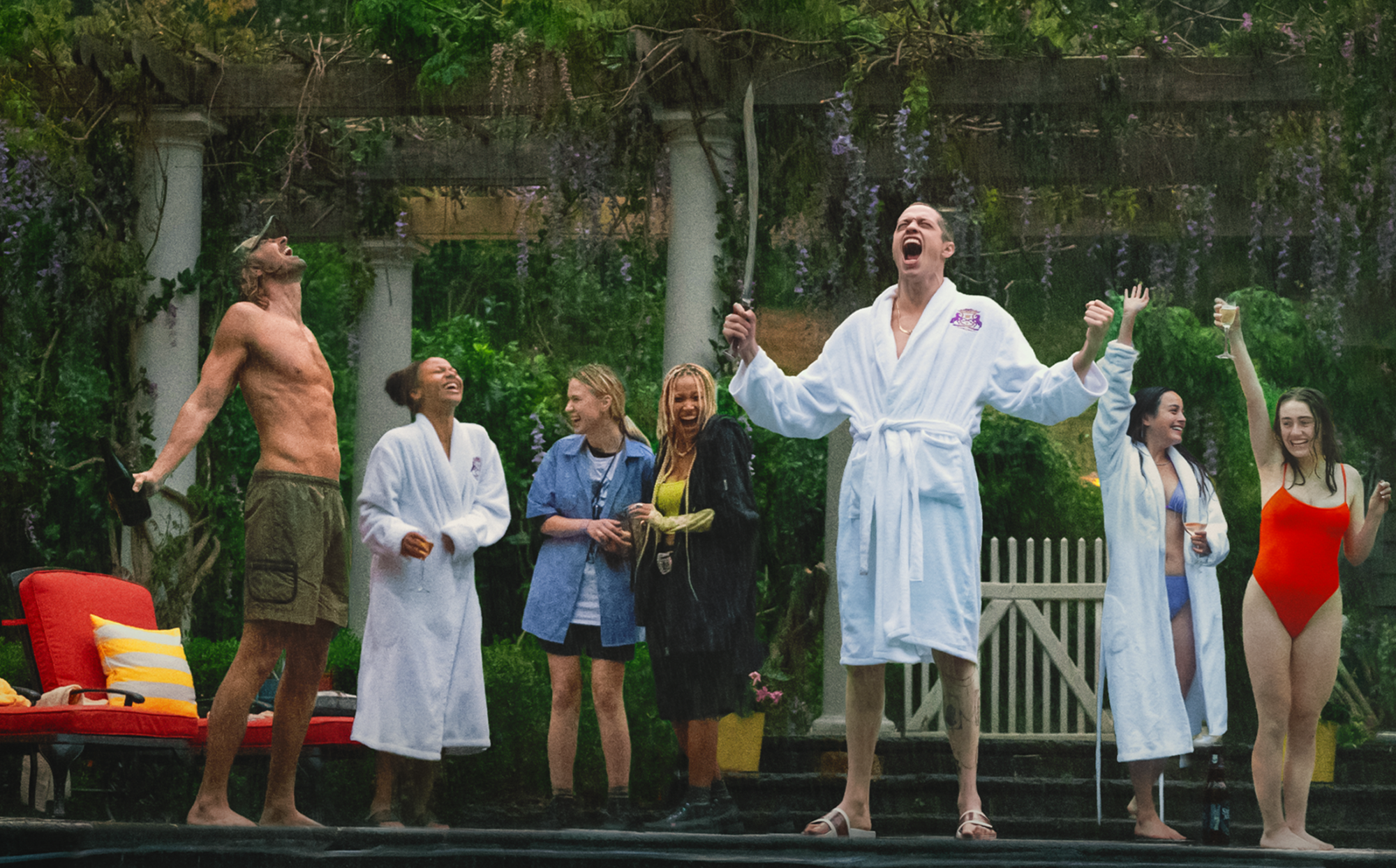 Slashers tend to follow a familiar pattern that it’s easy to get stuck in the mindset of determining who will die and who is the true killer. Bodies Bodies Bodies is refreshing for switching up this common formula. It features an ensemble of rich young people who find themselves at each other’s throats. At some point, however, the story becomes less about who the killer is and more about how deceptive these people can be when they’re so insecure.

The premise is that there’s a hurricane coming and seven young people decide to have a party at their rich dad’s house to ride out the storm. The last arrival at the party is Sophie (Amandla Stenberg) bringing along her new girlfriend Bee (Maria Bakalova). There’s an awkwardness in the air as one of the friends admits they didn’t want Sophie to come. There’s also tension as the party’s host David (Pete Davidson) is not exactly cool with his ex-girlfriend bringing along her new boyfriend. A powder keg is going to go off in that house.

At first, the party seemed to be going fine. Everybody is drinking and doing drugs. They play a silly murder mystery game that is both playful and revealing. Then the party turns dark when one of them ends up dead. Who could have committed a murder most foul? Well, everybody has something they’re hiding at this party. There’s not a Poirot or Marple among them so everybody is literally a suspect.

As one might expect from such a title and premise, the bodies soon pile up and the tension rises higher. More truths are revealed but these are truths more of melodrama and ridiculous insecurities. Romantic affairs are unearthed. Uneasy pasts hidden more out of shame are concealed. Professions are truly revealed. Podcasts are mocked. With no smartphone service and a hurricane raging outside, the anxiety increases all the more.

There’s a lot of dark humor in this idea of laying bare a generation that feels constant pressure to prove themselves. But such a picture doesn’t go for the easy comedy of just mocking these rich kids for constantly being on their phones or just not understanding the plight of the middle class. Although it was pretty funny when one of the worst insults one of them slings is calling somebody’s parents upper-middle class. Many of the insecurities they have are relatable ones. We all want to be loved and feel as though we need to put on a mask to find any level of acceptance. Yet it’s not worth killing someone over not liking your podcast, even if those take a lot of work as one partygoer tries to stress.

Director Halina Reijn finds the pitch-perfect allure of dark comedy, bloody violence, vicious social commentary, and neon staging to make this type of picture work. She also has this certain appeal to give the film an air of a modern murder mystery, where conflicted characters are still bound by money, sex, and pride. If it seems absurd that those motivations amount to minor class differences, one-night stands documented in texts, and wanting to look cool using swords, that’s because it is. Halina is very much aware of how ridiculous that sounds and milks the best type of humor from such a scenario.

Bodies Bodies Bodies is brilliant and bloody fun in how it plays around in its slasher setting. All of the actors have a natural nature, even being stuck-up rich kids who crumble upon any sense of humility. You don’t so much feel for them as you understand them, relating to their insecurities yet laughing at the extremes they pursue to cope with them. It’s a doozy of a picture that is sure to go down as quintessential dark horror.