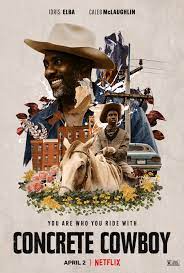 Concrete Cowboy won’t surprise much in its coming-of-age tropes. 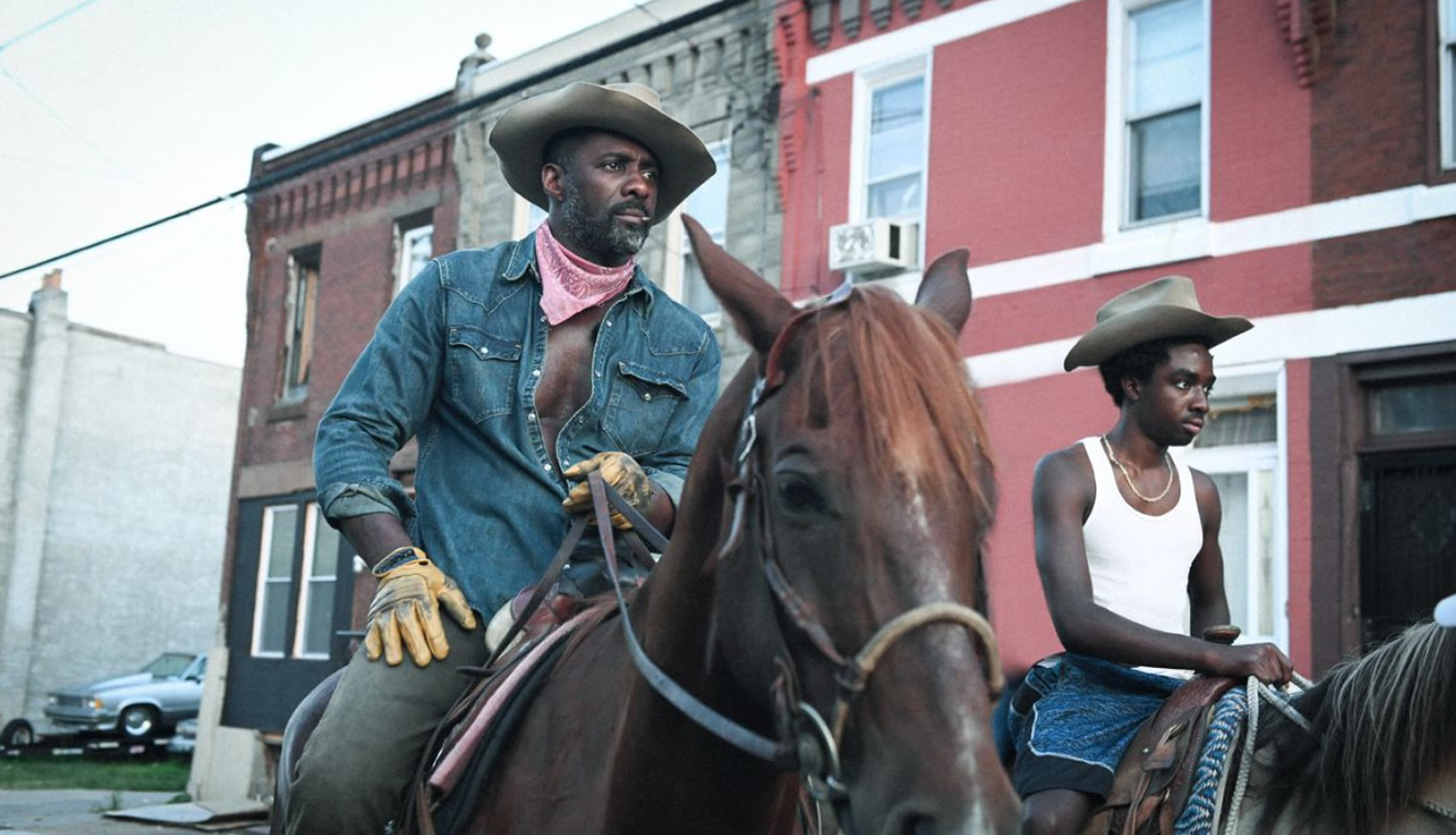 Concrete Cowboy ends by answering the question that many probably have at the start of the film: Are there really horses in Philadelphia? The truth is delivered by real riders of the area where horses trotted about urban areas. When director Ricky Staub first witnessed such a sight in the city, he was perplexed by such an uncommon animal to the city. His research led to him learning of the Fletcher Street Urban Riding Club and the novel, Ghetto Cowboy by Greg Neri, which served as the basis for this coming-of-age drama.

The film follows Cole (Caleb McLaughlin), a teenager who is easily falling down a dark hole with the wrong crowd. He’s a misfit in school and takes interest in the easy life of a criminal. Fed up with dealing with her son, Cole’s mother decides to dump off her boy with his father. His dad is Harp (Idris Elba), a cowboy of Philadelphia. Cole may not have expected to see horses in the neighborhood where his dad resides. But the reasons why his parents are no longer together becomes clear when Cole enters Harp’s home and finds a filthy apartment lacking in food.

Cole is reluctant but still learns to make his way among the cowboys and the stables of the area. He proves his worth by performing the usual duties that go into maintaining a horse and learning the hardships that come with maintaining such a lifestyle in a non-country setting. One rider now bound to a wheelchair speaks how the expenses of keeping horses are so draining that you’ll often have to decide who will eat that month: you or your horse?

Since this is meant to be more of an inspiring tale, Cole will naturally get used to the flow of work. There’s a scene where he’s tasked with hauling horse manure off the ground and into a truck. This requires him to use a wheel barrel and roll it up a plank. In any other film, Cole would fall into the manure, be mocked by the seasoned horse riders, and find himself out of his element. This doesn’t happen. Cole successfully dumps the manure without problem, leading to mild applause from the gawking elders. They realize this man is well on his way to becoming a rider.

Cole’s journey hits some rockiness, however, when he spends his off-hours connecting with his pal Smush (Jharrel Jerome), a peer he can relate to. Smush tries to help provide for Cole by having his back more than his father and getting him used to a profitable world of illegal dealings and theft. Given that Harp can offer little more than horse riding lessons, Cole gravitates towards this lifestyle almost automatically, considering such profits can put more food in the fridge than the beer and cheese slices that Harp can muster. Of course, that lifestyle comes with a price that Cole needs to make a crucial decision.

Concrete Cowboy won’t surprise much in its coming-of-age tropes. There are the chill moments of Cole finding his place among an unlikely community as well as the dramatic monologue where Idris Elba has to inspire his boy to rise up and be somebody. Naturally, there’s a scene where Cole finally climbs atop a horse and breaks him in. It helps that this scene is amped up by Cole helping Harp corner a horse rampaging a baseball field with his father deciding this is the time to prove himself.

Where Concrete Cowboy succeeds is in its contemplative atmosphere that allows the viewer to appreciate more of the juxtaposed beauty of such an unorthodox tale. The drama present comes fairly standard, to the point where topics of racism and gentrification are given more a graze than exploration. But for being little more than a drama of a teenager finding some meaning in pursuing horseback riding, the film gets the job done well enough to be more enduring than tedious.