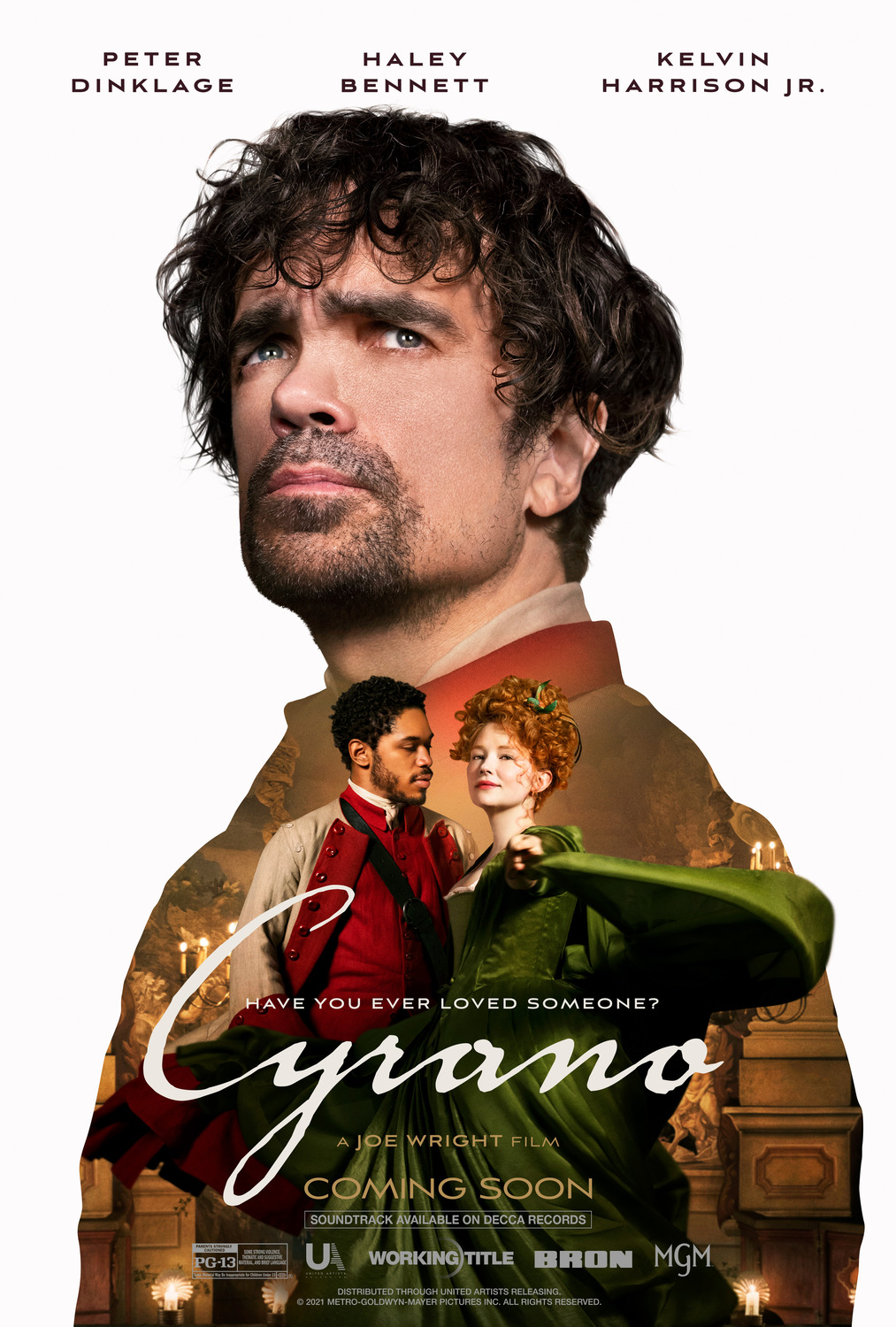 Cyrano is an absolute delight of a romantic historical epic with musical charm. 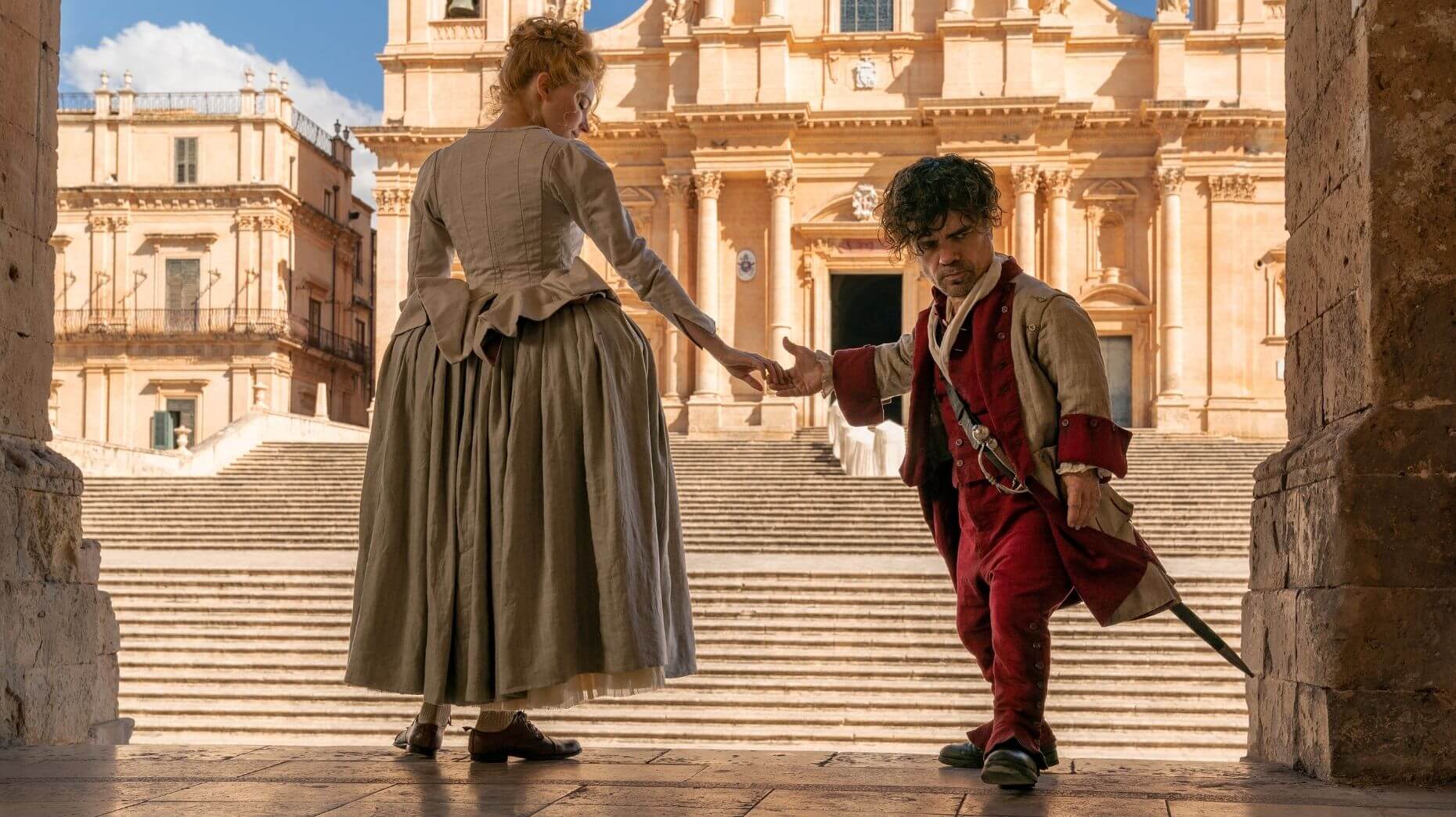 Based on the play by Edmond Rostand, Cyrano is an absolute delight of a musical. It’s a historical drama that is brimming with charm, pathos, romance, and wit. Whereas most costume dramas feel as though they get lost in the decadence of the elaborate and sophisticated nature, Joe Wright’s film never loses its touch or its edge, always maintaining a certain sense of magical allure throughout. It’s the type of film that makes one feel alive and dazzled by the big screen.

Peter Dinklage is in top form by playing the titular role of Cyrano de Bergerac, a swordsman and poet who is quite the talk of the town. Despite his short stature that becomes a subject of ridicule, he holds his ground well. Whether it’s savaging an elite with his words or beating them in combat with clashing blades, he takes up any challenge. Well, any challenge except love. After proving himself to be quite the vocal critic of the theater, he finds himself infatuated with the lovely Roxanne (Haley Bennett), a woman with dwindling money and an arranged marriage to attend to. With the prospect of a date, Cyrano states he wishes he could fight 100 men to ward off such anxieties. He’s later approached by ten men in a dark alley. “I was expecting one hundred but ten will do.”

Even though Roxanne has an arranged marriage to the egocentric and stuffy general of De Guiche, Cyrano believes he may have a shot with her considering she desires something more. Though Guiche seems like an easy man to best, there’s another man who enters the scene. The newest recruit of Christian de Neuvillette (Kelvin Harrison Jr.) has caught the gaze of Roxanne and she seems to be madly in love with him. The only problem is that Christian is terrible at articulating his love. Seeking this as a chance to showcase his lovely words that have gone unspoken towards Roxanne, Cyrano opts to write the love letters that Christian will send towards Roxanne. It’s a ruse that becomes harder to maintain when Christian starts speaking more through his mouth than Cyrano’s pen.

Dinklage is a real stand-out of this picture and he plays one of his most fascinating characters to date. He dominates the screen whether he’s engaged in battle or singing for the many musical numbers. His conflicted romance comes off as sympathetic and sweet in how he struggles to maintain a sense of masculine distance with his heartfelt words he dare not speak to the love he believes he will not enrapture. At the same time, there’s great wit at play with his skills that make for some absolutely sensational scenes of stellar acting. His first scene is a memorable one with notes of hilarity, viciousness, songs, action, and even bitter despair when he manages to kill his opponent who tries to stab him in the back.

Wright’s direction is spot-on for such a film. He finds just the right flow for the wonderment and bittersweet moments, transitioning effortlessly from dialogue to dance and music. The setpieces feel just showy enough without going Broadway. I really love the scenes of Christian singing his conflicted thoughts while ambling through marching soldiers, as Cyrano watches from the corners. Another fantastic scene features Roxanne strutting down the street in a decadent dress while other women in similar outfits provide a few dance steps in the background. But if there’s one sequence that is most powerful, it’s the climactic scenes on the battlefield where Cyrano and Christian find themselves facing death and still finding it hard, to be honest with their feelings.

Cyrano is an absolute delight of a romantic historical epic with musical charm. In addition to being a stellar performance by Dinklage, there’s beautiful drama on display in everything from 1600s fashion to the numbers of passion, sameness, and even humor. I absolutely adored this picture and its marvelous allure that will easily enrapture any viewer hoping for romance most touching and characters most fascinating.