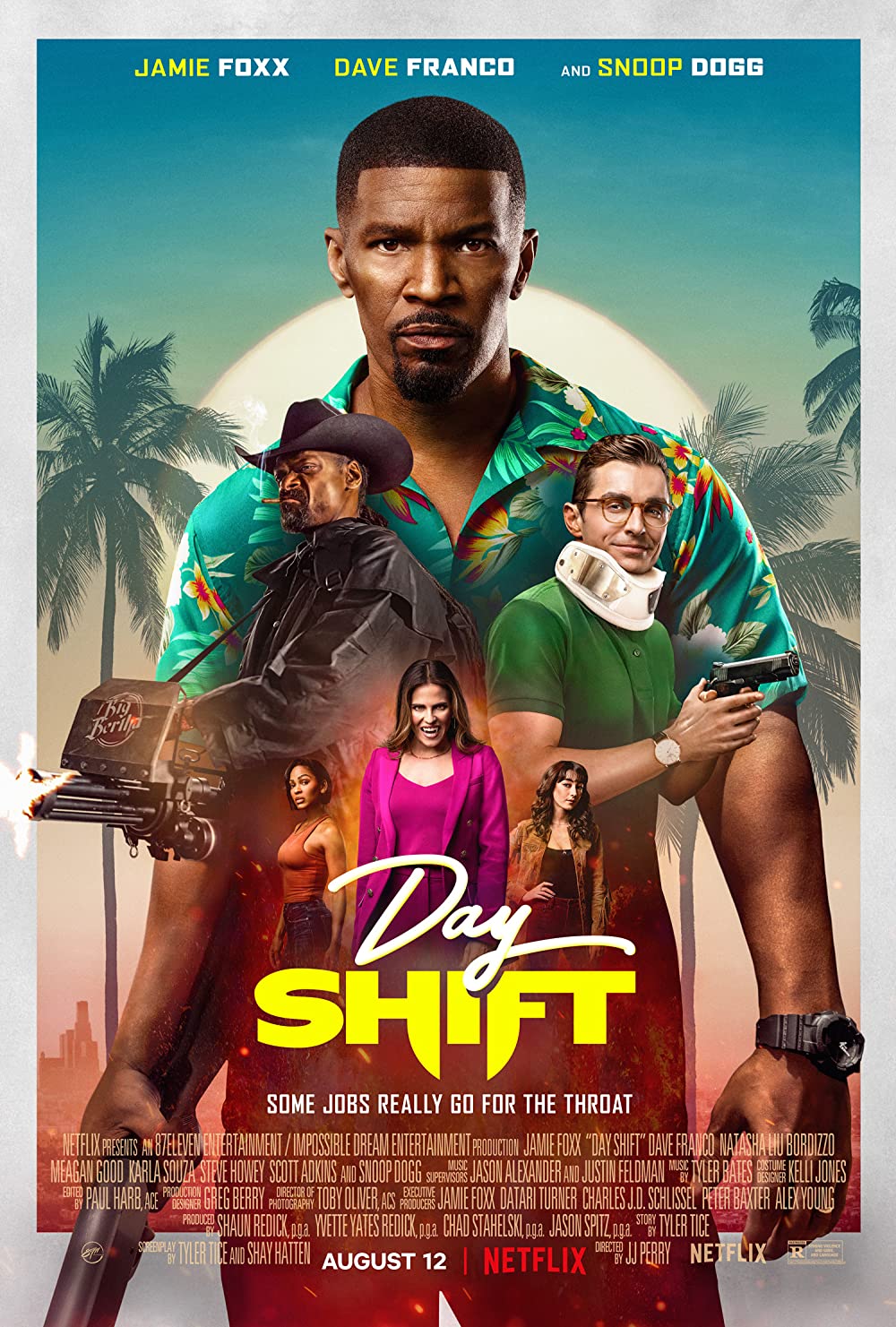 Day Break is mostly going to satisfy the horror hounds but leave them thirsty for more of that great action with a better script.

Day Shift has a lot to live up to as yet another horror picture about underdog vampire hunters. Yet for being a film that feels the desire to reference Twilight, this film manages to have its moments despite playing things rather by the book. That may not be saying much for a story about vampire hunters that break the rules but it’s better than being completely disappointed by this crowded sub-genre.

It helps that Jamie Foxx fits snugly into the role of Bud Jablonski. He’s a pool cleaner to the public, vampire hunter to those who know it, and the best dad to his daughter. He’s also behind on payments that are angering his ex-wife. Doing some extra vampire hunting may ensure that he can prove himself to his daughter in the short time span of a week. Of course, this requires Bud to work with some people he’s pissed off in the past.

There’s a bigger plot about gentrification and a secret organization of vampires taking over California with a new sunscreen that protects the creatures during the day. Really, though, most of the film is just a series of cool fight scenes against vampires. It helps that there’s fun yet simple characters thrown into the mix. Dave Franco plays a pencil-pusher of the vampire hunting union that finds himself being thrown into the field. Franco and Foxx have some decent chemistry, even if it doesn’t fully come across like these guys are perfectly paired like a buddy cop movie. Peter Stormare is in his element as a shady vampire fang collector. Natasha Liu Bordizzo makes for a solid vampire villain. You also have Snoop Dogg playing an expert vampire hunter who is mostly just playing Snoop Dogg…with a minigun. So there’s some fun with that.

Day Shift is a bit frustrating for having so many decent genres that never fully mix well together. There is some martial arts present in the many scenes of vampire hunting but it feels like a lot of the physical excitement is reserved for a sequence starring Steve Howey and Scott Adkins. Quirky as these guys are playing eccentric brothers, they’re mostly an aside. There’s a neat car chase through city streets and reservoirs but ends rather anticlimactically and we don’t see much of it anywhere else in the film. There’s some dark humor in the vampire hunting but it’s treated with such passivity it almost feels like there’s no faith in trying to make this element work.

It’s disappointing that the ultimate story of Bud trying to be closer to his family feels more like a prop than a goal he fights towards. Even the twistier developments of this story feel sadly lacking, where the gentrification angle is only mildly addressed and Eric Lange only gets a handful of scenes to play the blustering vampire-hunting union boss. There’s a better film in here somewhere and I so desperately wanted to find it to better appreciate the scene where Foxx smashes a TV on a vampire and then decapitates him with it.

Day Break is mostly going to satisfy the horror hounds but leave them thirsty for more of that great action with a better script. I applaud stuntman-turned-director J. J. Perry for making a rather frenetic, bloody, and, at times, clever vampire movie with its fair share of brilliant moments. But those moments of bloody magnificence are lessened by a script that does more to mash genres together with a hammer than make them fit. What we’re left with is a Frankenstein’s monster of a vampire movie that is better than most but has some clearly visible stitching and a few parts that just don’t work as well as they should.