Entergalactic is such a trip of a movie that is worth the, well, trip. 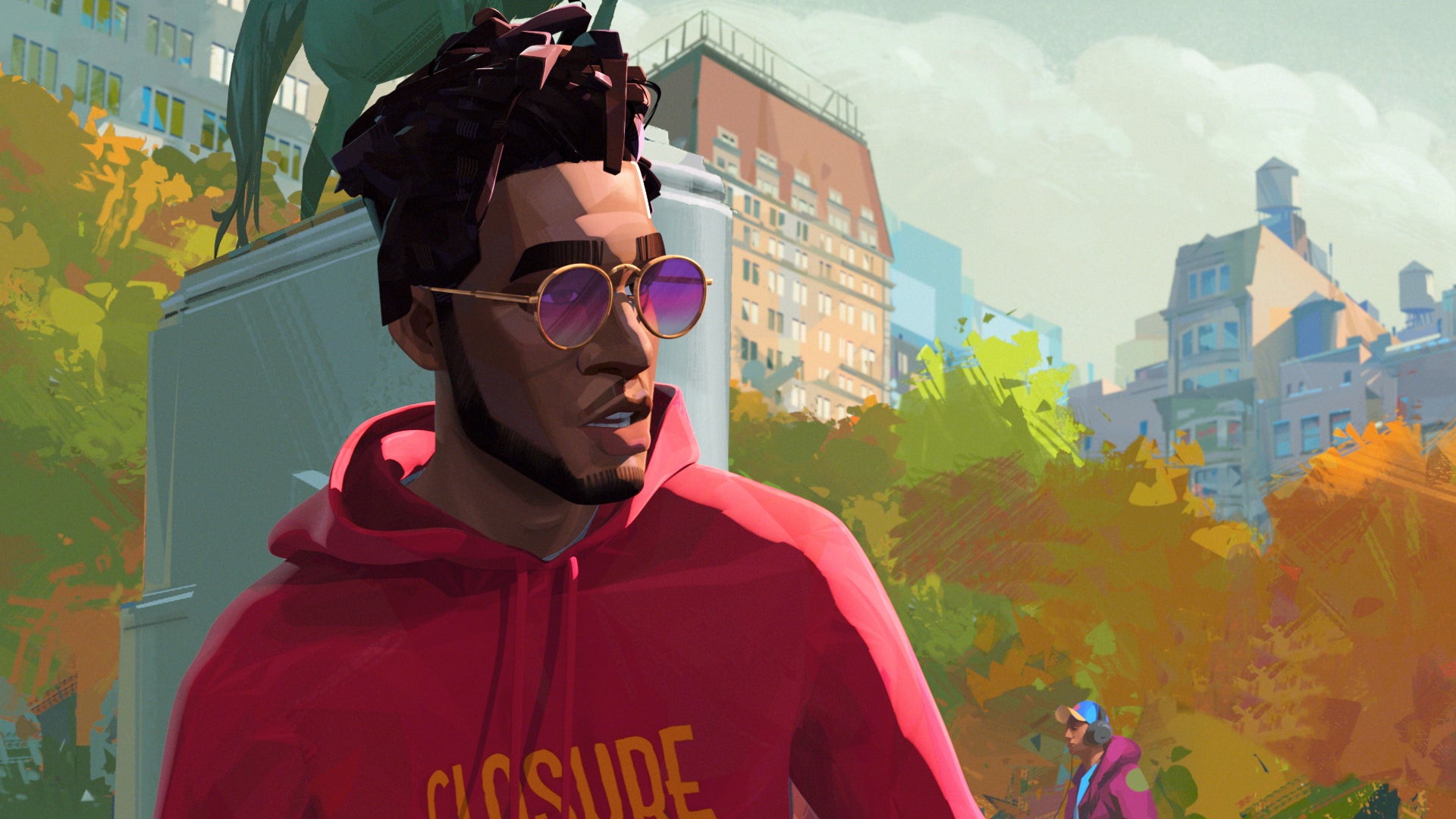 Kid Cudi’s Entergalactic is a wondrous dose of adult animation served up with heart, humor, and creative surreality. Despite how wild the name sounds, this is a relatable tale of urban romance and dreams, showcasing the highs and lows of one man trying to leave his mark on the world. Jabari (Cudi) has just moved to manhattan and is finding his life is taking a turn for the better. He’s working on a comic book, gets to smoke weed with his friends, and plays the field for finding the right love. The whole time, one thought keeps going through his head: What’s next?

It’s not so much that Jabari is at a crossroads so much as he is feeling overwhelmed with how fast life moves. It’s easy to see why he prefers to slow it down with a hefty inhale of cannabis. He prefers to let his imagination run wild and an animated world like this film allows those dreams to take flight. Sometimes he envisions what’s next for his comic book superhero. Other times he’s just grooving while riding his bike with a good buzz going.

At first, Jabari finds that an old friend Carmen (Laura Harrier) might be worth dating. They go to a party, have fun, and spend the night together. But their relationship moves a bit fast and Jabari doesn’t think he can make it work. He wants to maintain a friendship but it’s clear that Carmen is bitter about this reduction in their relationship. Soon, a new romance blooms when he meets Meadow (Jessica Williams), a photographer that is easy-going and can always get a chuckle out of Jabari. They hit things off in a big way, turning Jabari’s New York life into a wondrous dream, punctuated with a mesmerizing soundtrack by Scott Mescudi, Dot da Genius, and Plain Pat.

The animation for this film was handled by DNEG Animation in London and it’s incredibly striking. The bold color choices and 2D effects will probably garner some comparisons to Spider-Man: Into The Spiderverse, especially for the street art aesthetic. It really does pop and brings to life what feels like a solid love triangle and freewheeling twenty-something story. The mixture of 2D and 3D is brilliant, leading to many memorable sequences. One of my favorites involves Jabari’s friend Ty (Tyrone Griffin Jr.) who gives a hilarious story about hooking up with a Russian girl and then nearly being arrested by ICE for harboring a hacker. It’s loaded with exaggerated sex, absurd physical feats, and some humorous misunderstandings in the storytelling.

There’s quite a bit of ground covered in the film and it’s surprising how much of it works. A side story involves Jabari growing concerned about his comic book character being too street-level for the company he’s pitching towards. This is mostly because Jabari’s co-worker Len (Arturo Castro) gives some out-of-touch advice on how to be a minority working in a mostly-white organization. Thus, a conflict emerges between meeting the demands of the editors and being true to his comic book character Mr. Rager, delightfully voiced by Keith David. It’s not Jabari’s sole concern but it does help further paint his relationships, where Meadow’s voice has quiet concern for Jabari selling himself out for his fame.

Entergalactic is such a trip of a movie that is worth the, well, trip. It’s stylish, surreal, visually intoxicating, and just a weirdly feel-good movie that borders on rom-com territory. It’s also very pleasing to see that animation can be more about the fantastical in story while also using the medium beautifully for such a down-to-earth story about lovers, friends, art, drugs, and more. This is exactly the type of animated film I wish I had in college and I can only hope it inspires many young folks to get out there, make some art, love somebody, and just enjoy life to the fullest.