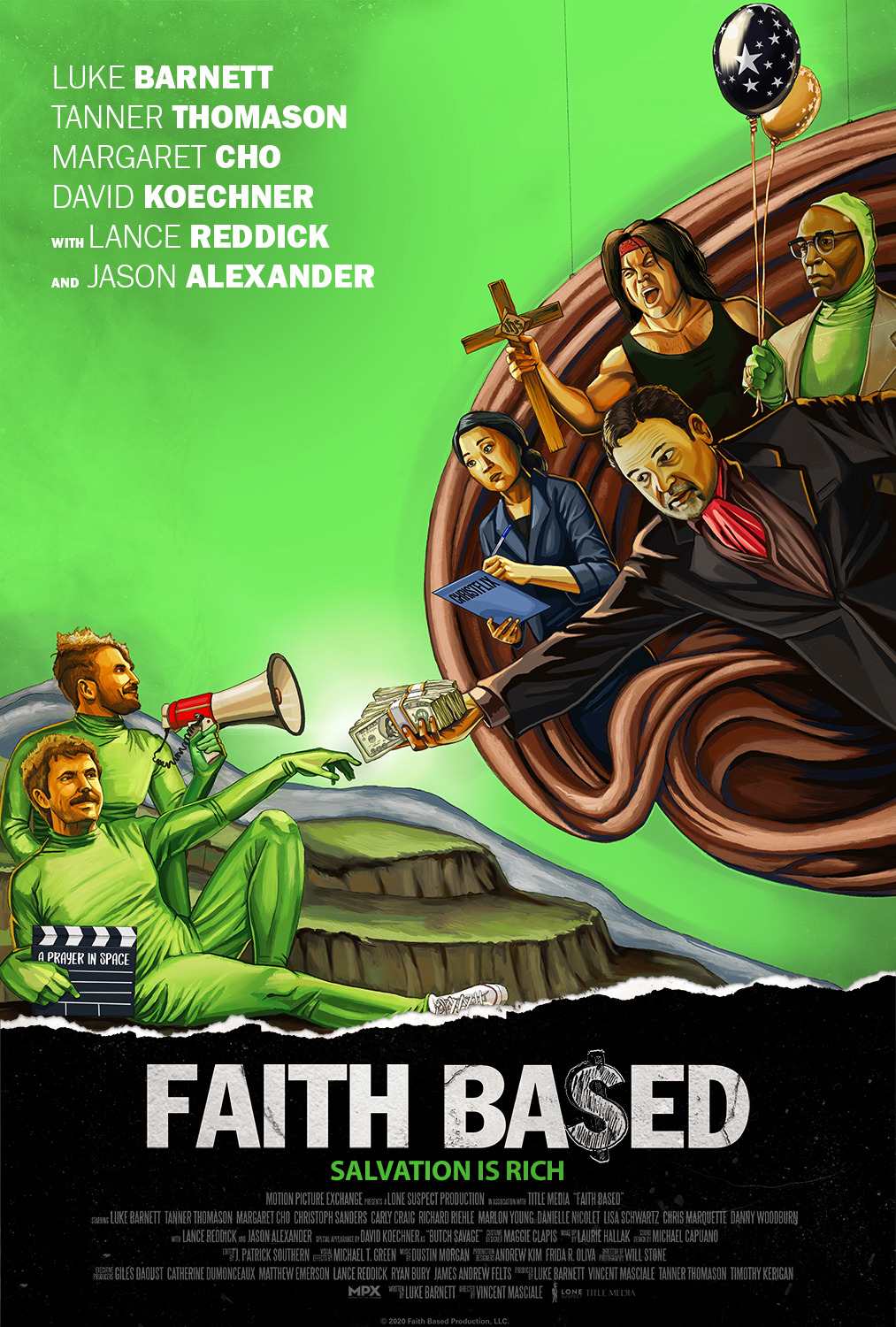 Faith Based has high aspirations that are not met but still manages to find its heart amid is behind-the-scenes story.

Faith Based (2020) Review By Mark McPherson 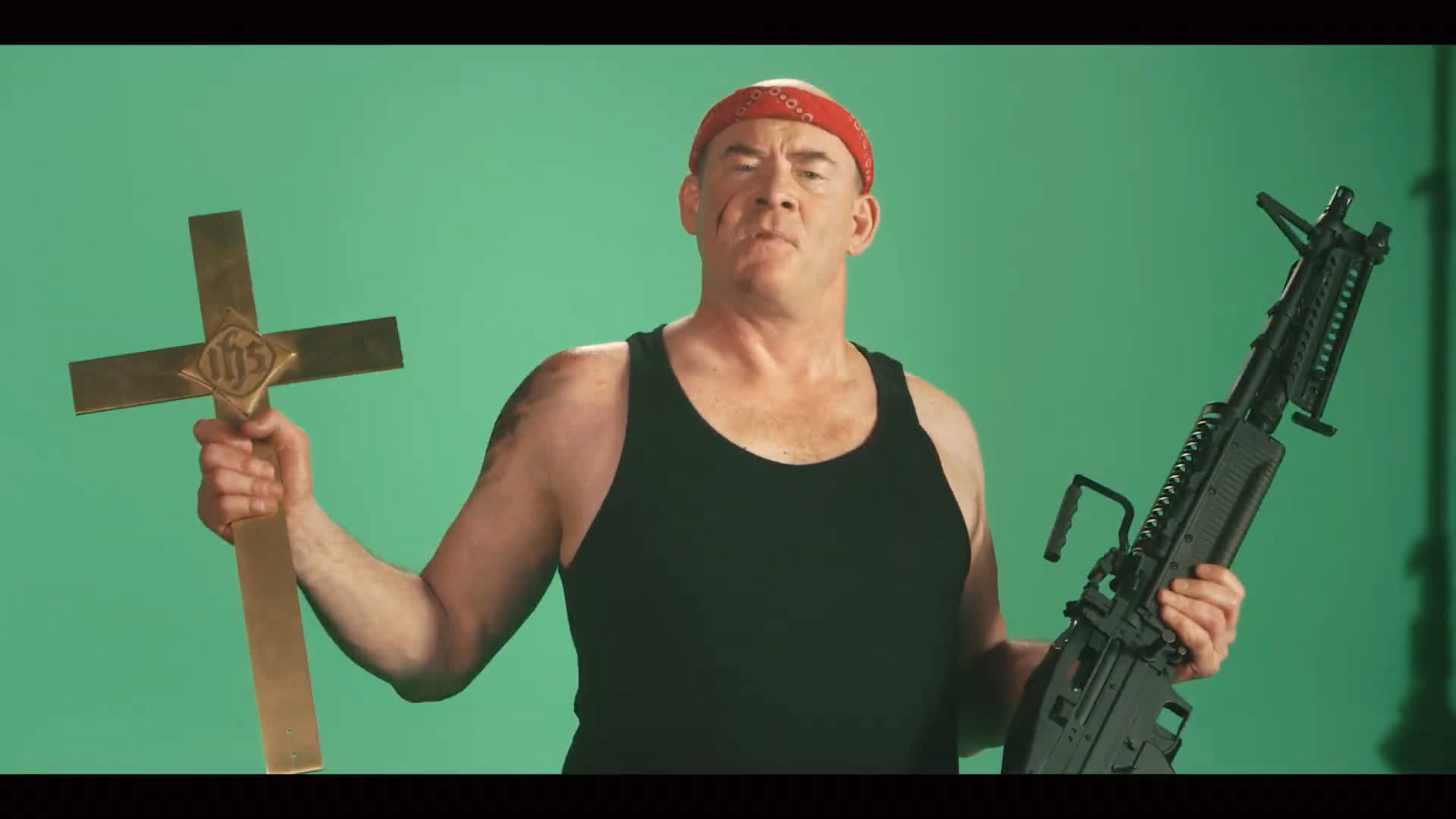 There’s a wasted opportunity within Faith Based. The film is clearly trying to mock the easy-money scam that is Christploitation, specifically the Christian film market. Most people are familiar enough with this type of religious propaganda similar to God’s Not Dead and Let There Be Light that it was about time these types of films were mocked hard. You may be disappointed with how such a film treats this topic with kid gloves. That being said, for failing at that type of satire, the movie does succeed in being an enduring film about making movies.

The film concerns the two friends Luke and Tanner. They have an undying love for cinema and figure that maybe it’s about time they make a movie of their own. However, a major problem concerns finance and how to make a profit. After all, both of them are in debt. When thinking up ideas for their movie, they arrive at pitching a Christian movie, basing their decision on how much money they make. There’s no specific film or studio referenced but it’s most likely Pure Flix being referenced here. The aspiring filmmakers meet with Christian producers who are all shrill and to-the-point people who only care about the bottom line more than the Christian message. That’s a bit of a gross oversimplification of a studio like PureFlix but it becomes pretty clear that this film is not going to be that type of movie.

The rest of the movie is spent on the trials and tribulations of trying to create a movie. Luke and Tanner learn the ins and outs of filmmaking. Specifically, they learn about the problems involved with directing actors and the technical errors that come with shooting on green screens. Why green screens? Well, they apparently want to make a sci-fi Christian film which honestly sounds like a solidly weird B-movie. The screenplay and direction are just silly enough that you’re really rooting for these guys to finish their movie.

There’s an intrepid spirit that’s genuine enough to pull for the friendship of Luke and Tanner to survive this experience. The two actors do their best to sell the meta nature of filmmaking while also focusing on the problems that arise when career clashes with comradery. Giving the film an extra dose of solid credentials are the additions of Jason Alexander as an infomercial guru and David Koechner as an absurd masculine movie hero of the 1980s. Sadly, they’re mostly just reduced to a handful of side scenes and rarely play a heavy role in the central story. That being said, it was pleasing to see Lance Reddick pop up as a pastor with a few hilarious lines to contribute to the film.

Faith Based has high aspirations that are not met but still manages to find its heart amid is behind-the-scenes story. The actors give it their all and the focus on filmmaking has this adorable nature where I nearly forgot about the Christploitation angle. Honestly, one could easily see such filmmakers forgetting about the original vision, spending much more time on their spirit of filmmaking rather than lament on the type of film they’re making. There’s a far better film tell with its misfiring satire but a heartwarming movie-making plot is still charming enough for a laugh or two.