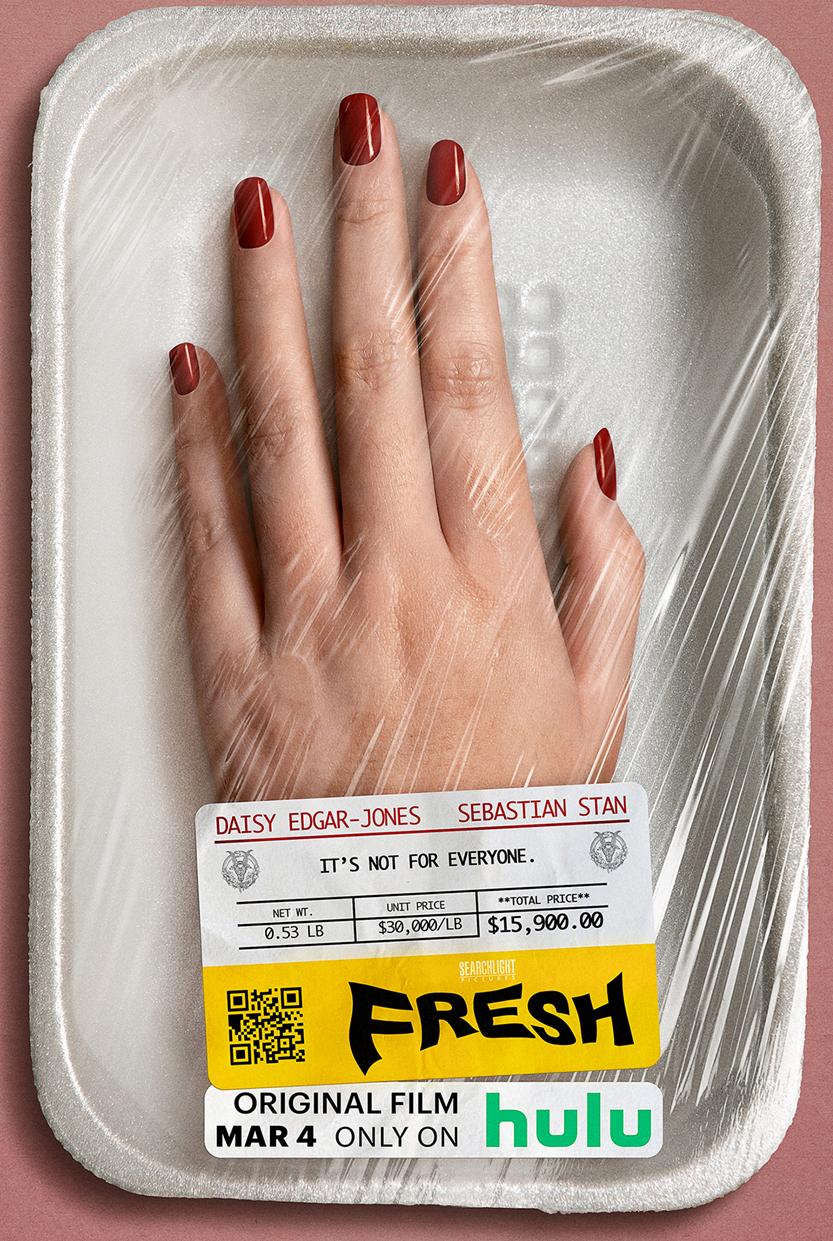 Fresh is not for everyone but horror lovers will enjoy the pairing of sadistic cannibalism and social commentary. 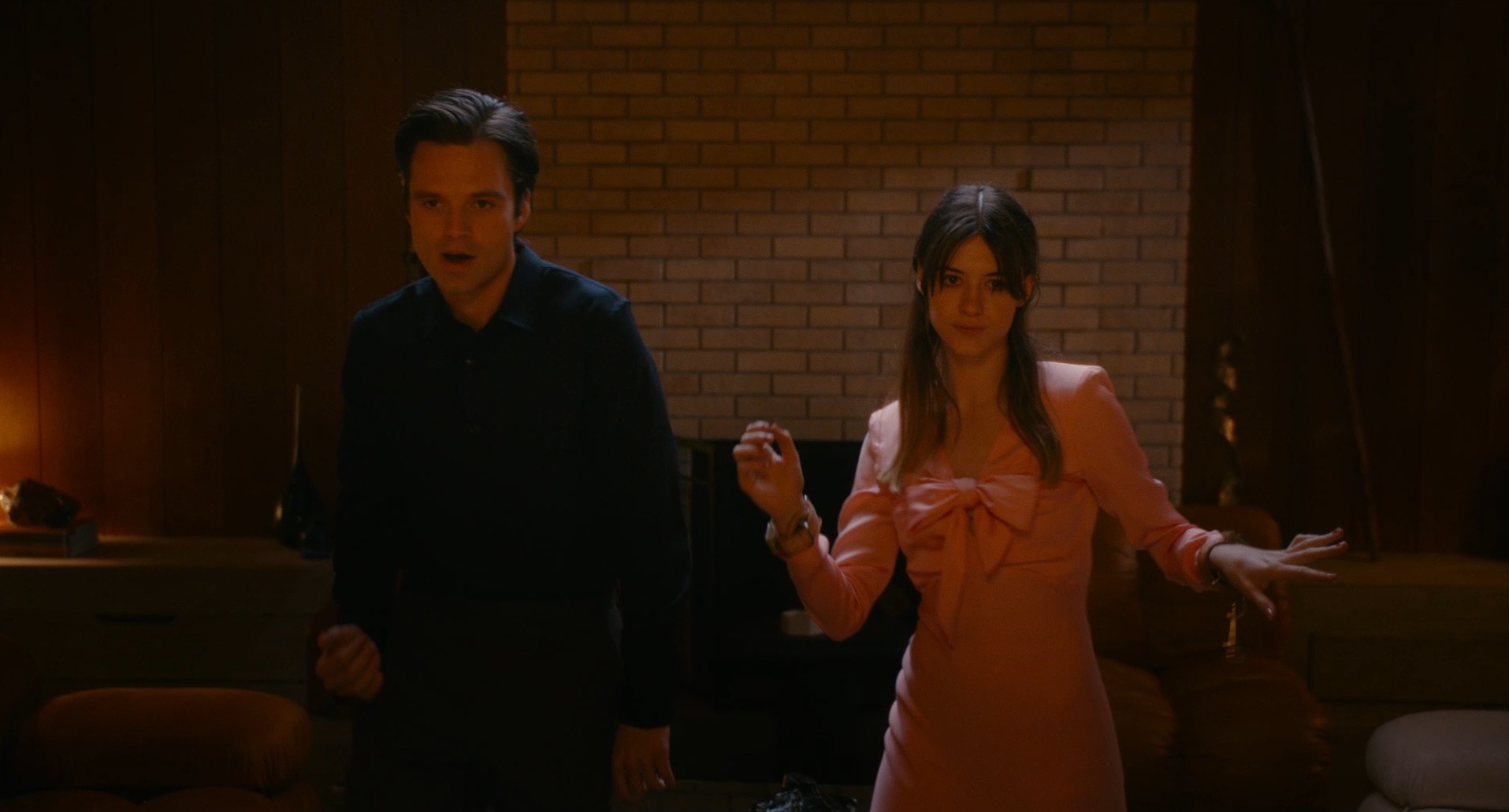 Fresh is a horror film that perfectly creeps under your skin. This is thanks to how slow the film takes itself to progressively build up the creepiness. It starts with Noa (Daisy Edgar-Jones), a young woman trying her hand at online dating. Her luck has been terrible but she may have found the right guy with the handsome Steve (Sebastian Stan). They go out on a few dates, have sex, and seem well on their way to a happy life together. But a vacation changes the mood entirely and it’s only then when the trippy and brutal opening credits start after 40 minutes into the film.

Noa soon finds herself in a much different movie after having been drugged and tricked by the deceptive Steve. She finds herself caged among a slew of other girls that were also duped into this hot guy seeming to be the one worth pursuing. For what purpose are these women kidnapped? It’s rather simple: He wants to eat them. Steve has quite the appetite for human flesh, preparing it in a way that would make Hannibal Lector blush at the decadence. Steve isn’t just a crazed cannibal but a connoisseur of the flesh of ladies. He’s able to fully explain the difference in textures and pairings between a leg and buttocks.

As Noa tries to find a way out of her prison at his luxury estate, her best friend Mollie (Jonica T. Gibbs) slowly pieces together clues. She can tell from the messages being sent by Noa’s phone that she’s not on the other side. Some detective work is done on her part as she attempts to unearth where her friend has gone. Even once she finally has the puzzle solved of Steve being a kidnapping cannibal, she’ll have some convincing to do by a society that is highly skeptical of women in danger, where trust is questionable.

The film is as thrilling as it is unsettling. The scene of Steve making his move on chopping up flesh is treated with disturbing allure. He takes grotesque delight in lopping off mounds of bloody skin for the hunger he seeks to crave. It makes him a terrifying force that even simpler scenes of Noa convincing him to enjoy a meal together carry great tension for what he might do next. Both Noa and Mollie have some stellar grit it’s both exciting and fulfilling to watch what happens when they finally get the upper hand after being pushed down for so long.

By the third act of the film, the message becomes pretty blunt and clear. This is mostly communicated with how it’s revealed that Steve is leading a bit of a double life for having a wife and kids. His wife, Ann (Charlotte Le Bon), is soon revealed to be aware of his habit and even accommodating. When she confronts the imprisoned women seeking brutal revenge, she angrily fights back against them desiring to ruin what she considered a good thing. It’s an on-the-nose yet intriguing climax which makes it pretty clear that sometimes toxic elements of relationships are not only present in American culture but even held firm by the comfortable who feel safe that they’re not the ones being targeted.

Fresh is not for everyone but horror lovers will enjoy the pairing of sadistic cannibalism and social commentary. The performances are top-notch, especially with Sebastian Stan giving a pitch-perfect delivery for a secret psychopath. This is only the second film role for Daisy Edgar-Jones and, wow, does she have a presence in a role where she can really dig her acting teeth in deep. Creepy and compelling, this disturbing horror comes highly recommended, pairing beautifully with the likes of Raw and Get Out.