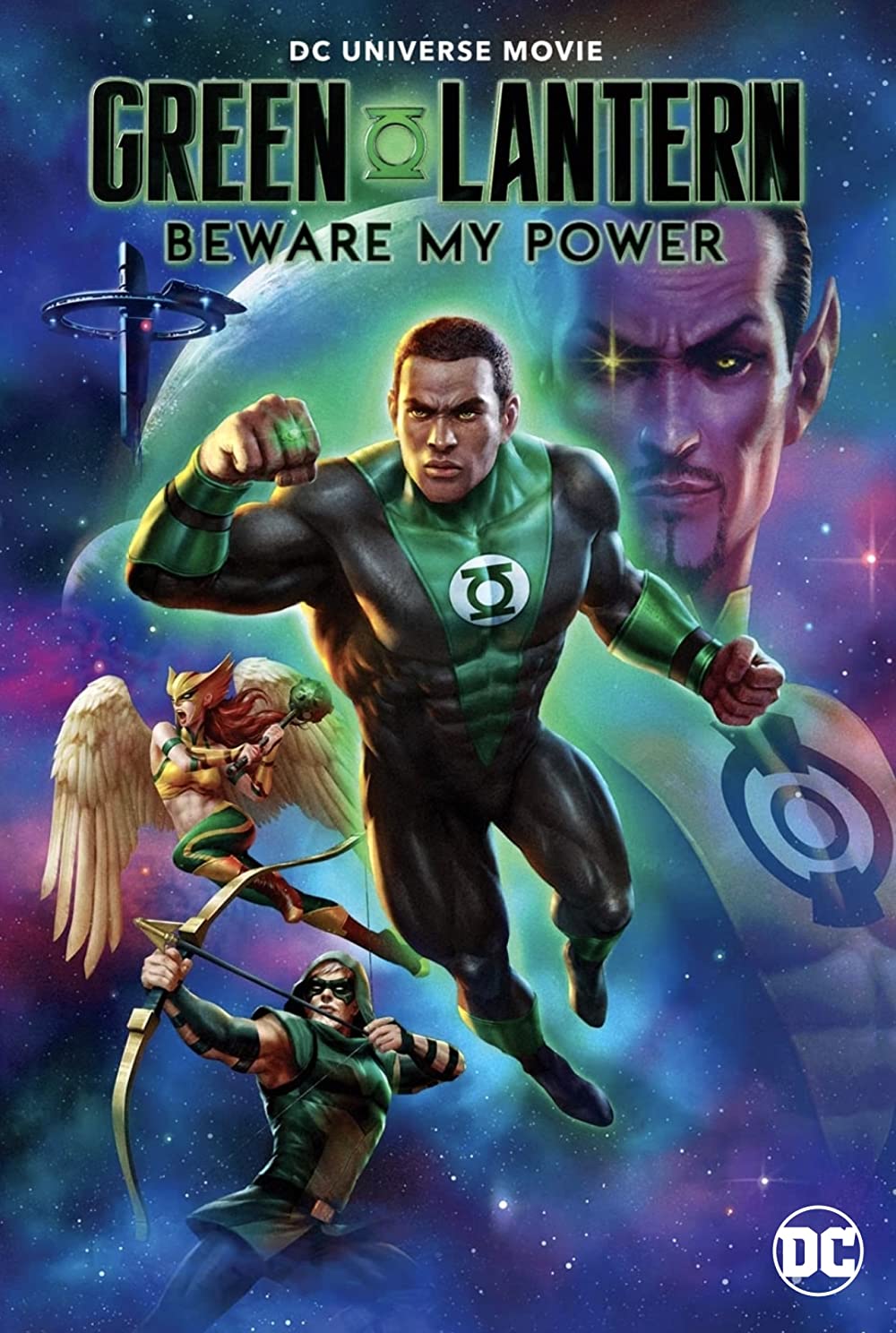 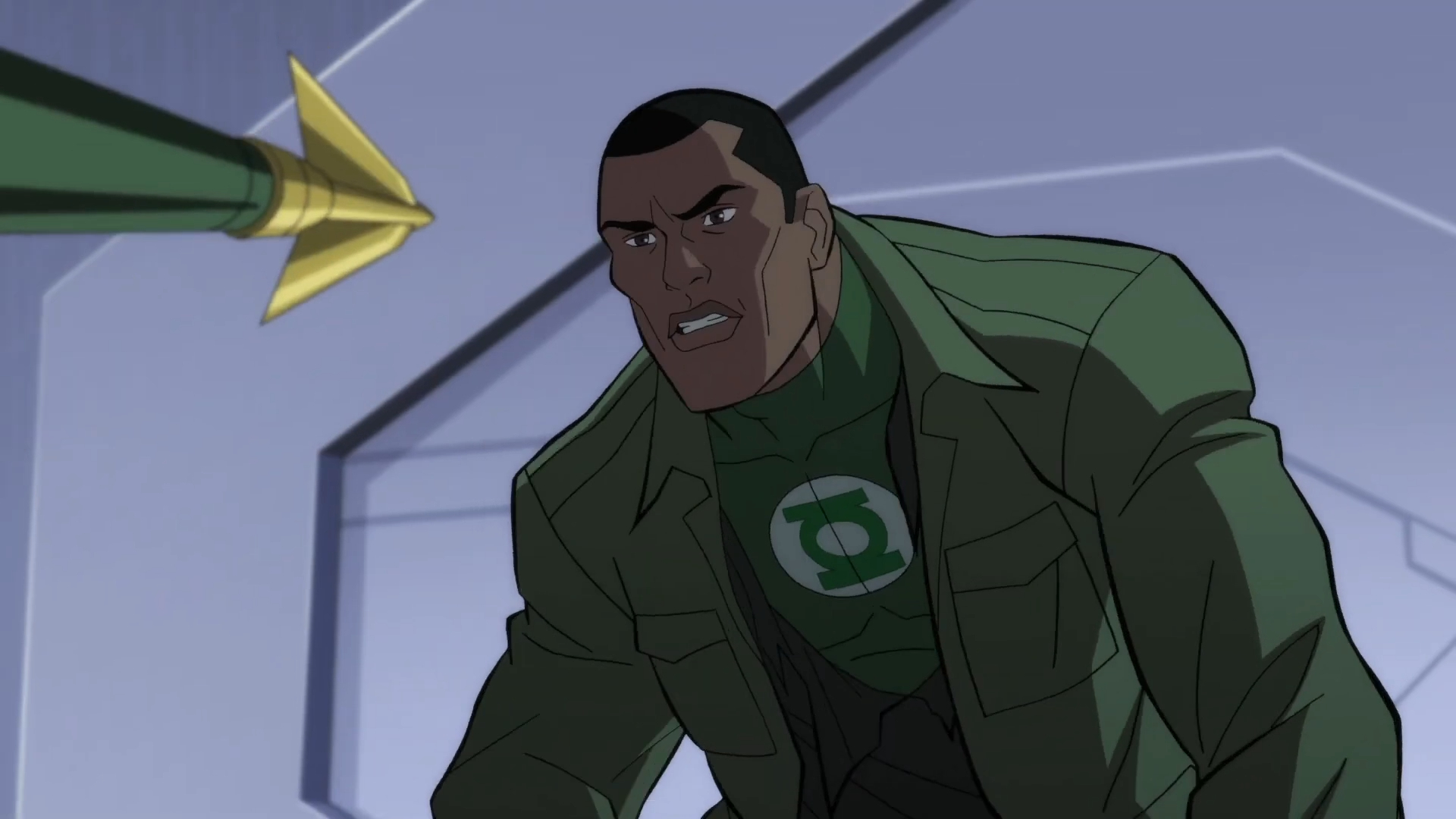 Beware My Power feels like reading a forgettable run of Green Lantern comics that wasn’t all that bad but never left an impression. It’s not that having a film centered entirely on the John Stewart Green Lantern can’t be interesting. In fact, this film presents a powerful premise that frames Stewart as having to deal with both the problems of a veteran and the issues of systemic racism. Sadly, this film doesn’t explore much past its solid first act, leading to a lukewarm Green Lantern adventure.

Part of the problem is that voice actor Aldis Hodge rarely gets some good lines to dig in with this character. Stewart’s character seems far too passive for being a fish-out-of-water, plucked from the streets of warding off bullies to being zoomed into space when chosen by the Green Lantern corps. Most of the first act is spent with Stewart learning the ropes of what it means to be a Green Lantern via his ring’s voice instructions and a crash-course in saving the galaxy. He’s practically chucked into the Watchtower of the Justice League, where he’s forced to work alongside Green Arrow in an intergalactic mission to repair the wiped-out Green Lanterns.

For DC Comics fans, there’s a lot of neat elements thrown in from the comics. The Rann-Thanagar War plays a crucial role when Stewart teams up with the Thanagarian Shayera “Hawkgirl” Hol (Jamie Gray Hyder) and the Rann interdimensional adventurer Adam Strange (Brian Bloom). The warring factions put aside their differences when realizing that there’s a sinister force at play manipulating this battle of galactic cultures. Complicating the mess further is the villainous former Green Lantern Sinestro (Rick D. Wasserman) leading his own corps based on fear and the very parasite of fear going by the name Parallax.

There’s a lot going on and it’s kinda sad that there isn’t much time for Stewart to add much of his own two cents to the story. Most of the time is spent with Stewart trying to figure out his ring and occasionally offering some relatable piece of dialogue. Outside of that, he mostly feels like a passenger in his own story. It’s especially tiring when it’s Green Arrow who has to give John specific instructions on how to recharge the Green Lantern ring by reciting the oath. After reciting and charging, John remarks with exclamation how such a corny phrase and action works. The truth is that it feels far more mundane than it should, whereas Stewart feels almost too casual about the whole saving the universe with a magic ring.

The animation is kinda all over the place for this film. There are a handful of moments that look eye-popping, specifically the moments in space with many ships firing back at each other. But then there are a handful of moments where you can sense the budget running out as the frame-by-frame animation starts losing a few frames. There are only a handful of moments that feels this cheap but they still stick out like sore thumbs in a picture such as this. The Green Lantern constructs are still cool but lessened by John’s limited imagination, and the climax features him using the ring to construct an automatic weapon.

Toward the end of the film, it feels like there’s a greater focus on the nature of non-lethal takedowns, especially with the dynamic between long-time friends Green Arrow and Green Lantern Hal Jordan. This lesson feels cheapened, sadly, when Hal’s violent streak is less of a conditioning and more of a literal parasite of evil. The reasoning by John at the end of the film as he attempts to comfort Green Arrow feels rather a hallow for reasoning with death, despite how much it haunts him. There’s a catharsis that doesn’t quite feel there as the film tries to wrap up its space mystery too neatly.

Green Lantern: Beware My Power is one of the weaker Green Lantern animated movies. It doesn’t have as many thrills as First Flight or even a greater sense of lore present in Emerald Knights. For as much as I love the Green Lantern universe and love seeing more movies centered around it, this entry just feels the most passive. It’s too slow to be for the GL fans and too briskly darting from character to character to be serviceable for newcomers.