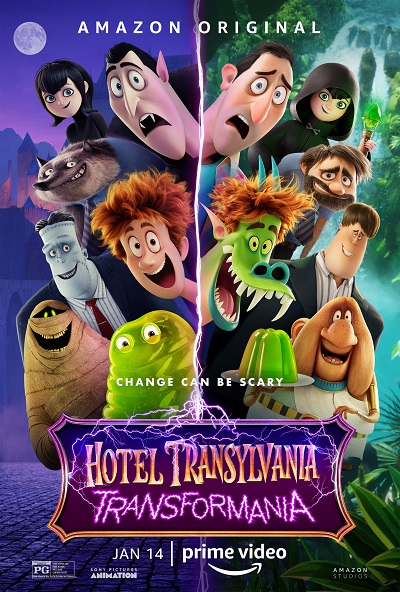 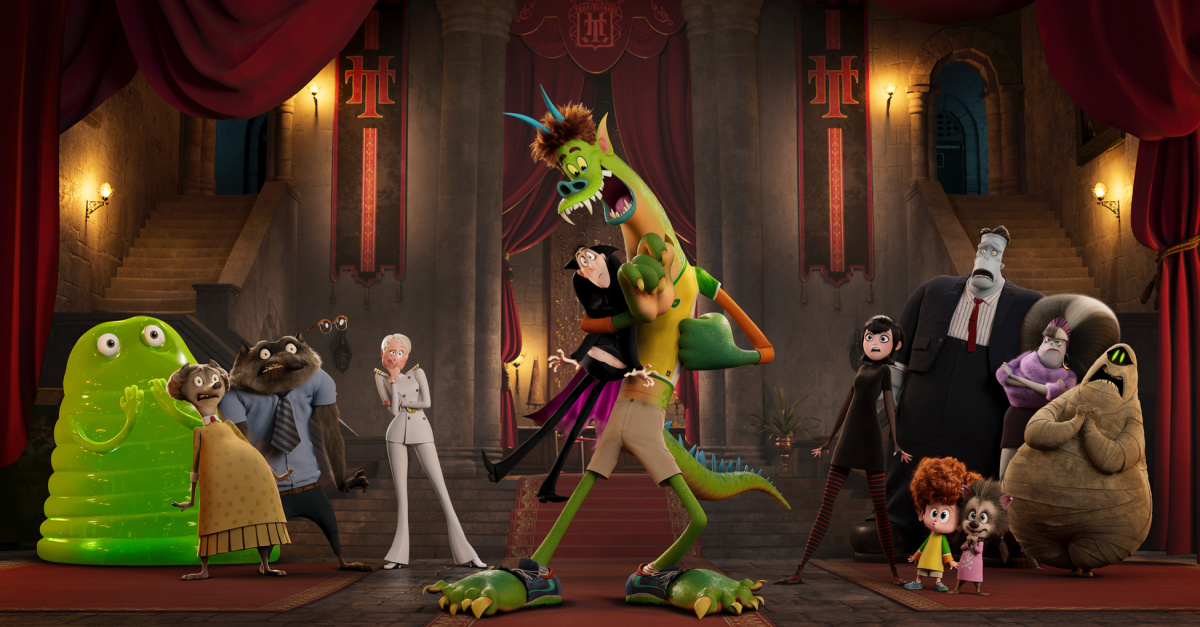 The saga of Hotel Transylvania has long past the point of ever truly surprising in its cavalcade of monsters and silliness. With this being the fourth film of the series, the concept has now come to the obligatory situation of positions being switched. Now the monsters get to learn what it’s like to be human while a human gets to learn how to be a monster. Though it may sound like a tired concept, it does a decent job at focusing more on the characters and less on ridiculous plots of monsters being accepted by society.

After all, at this point in the series, one would thank monster culture was no big deal. Not just for the society of this world but for the audience as well. The worries instead shift more to the aspects of family and acceptance. Count Dracula, still the ever-manic dad and grandfather, is considering retiring from the hotel game and passing his legacy down to his daughter Mavis. In doing so, however, he will also pass it down to his son-in-law Johnny, a human backpacker who easily gets on his nerves. He proves as much by trying to do something nice for Dracula and nearly ruining his party.

Drac tells a lie that Johnny can’t inherit the hotel because of law regarding non-monsters and real estate. Johnny, ever the gullible boy, believes this and tries to find a way to get around this issue. He enlists the help of the elder Van Helsing, who is apparently now his new grandfather after Drac married his daughter. Hellsing has a magical scepter that can transform humans into monsters. He uses it on Johnny and he goes from a lanky human to a towering dragon. Drac, upon learning this, tries to reverse the process but ends up turning himself into a human being. With no more juice left in the scepter, the two must go on an adventure to the jungle to find a magical gem that can restore them back to normal.

There’s a handful of decent bits with this scenario. I loved how a cautious Dracula finds himself learning all about life in the daytime, dealing with the sweltering heat that makes him sweat and mosquitos that bite his fragile skin. There’s a wealth of funny material to explore here about how wrong Dracula was with his perception of humans and about his son-in-law. Most of the jokes, however, feel pretty par for the course. For instance, one of the obvious gags gone from the start is Drac gaining a dad bod and a thinning hairline. I suppose it makes sense if you equate vampire years to human years, with Dracula apparently being middle-aged. Who knows what would happen if he transformed three decades later.

Johnny also finds himself mesmerized with his new powers but also unsure of them. Once he gets used to the aspects of breathing fire and using his wings to fly, however, he starts to go on a bit of a power trip. There’s a catch with the scepter that the effects will be permanent after some time and that Johnny may become more monster than human, going on killing sprees. Though, really, the onus is more on Drac for this problem considering he learns more of a lesson than Johnny.

The animation is still a treat for the eyes, even if Genndy Tartakovsky is far less present in this fourth film. I particularly dug into the character design of Johnny’s dragon form with the exaggerated and elongated features. With so many parts of his body almost moving independently as he zips through hallways and soars through skies, I just really dug his character design. The magic also befalls other monsters that bring about different human forms and shifting priorities. There are some relatable adult jokes about the werewolf Wayne happy to not be mauled by his children when they don’t recognize him and the Mummy being an elder amused by his cellulite. The invisible man gets to learn what it’s like to be visible (and naked) while Frankenstein’s monster becomes egotistical when he looks handsome without stitches.

Hotel Transylvania: Transformania is passable kids’ entertainment. The best thing I can say about it is that this may be the only film in the series NOT to end with an obligatory dance number. You will still have to sit through a standard MacGuffin hunting third act and a handful of jokes that are more fun for the idea than the execution. Thankfully, there were just enough slapstick antics present that I didn’t find myself entirely bored with meandering monster mash once again.