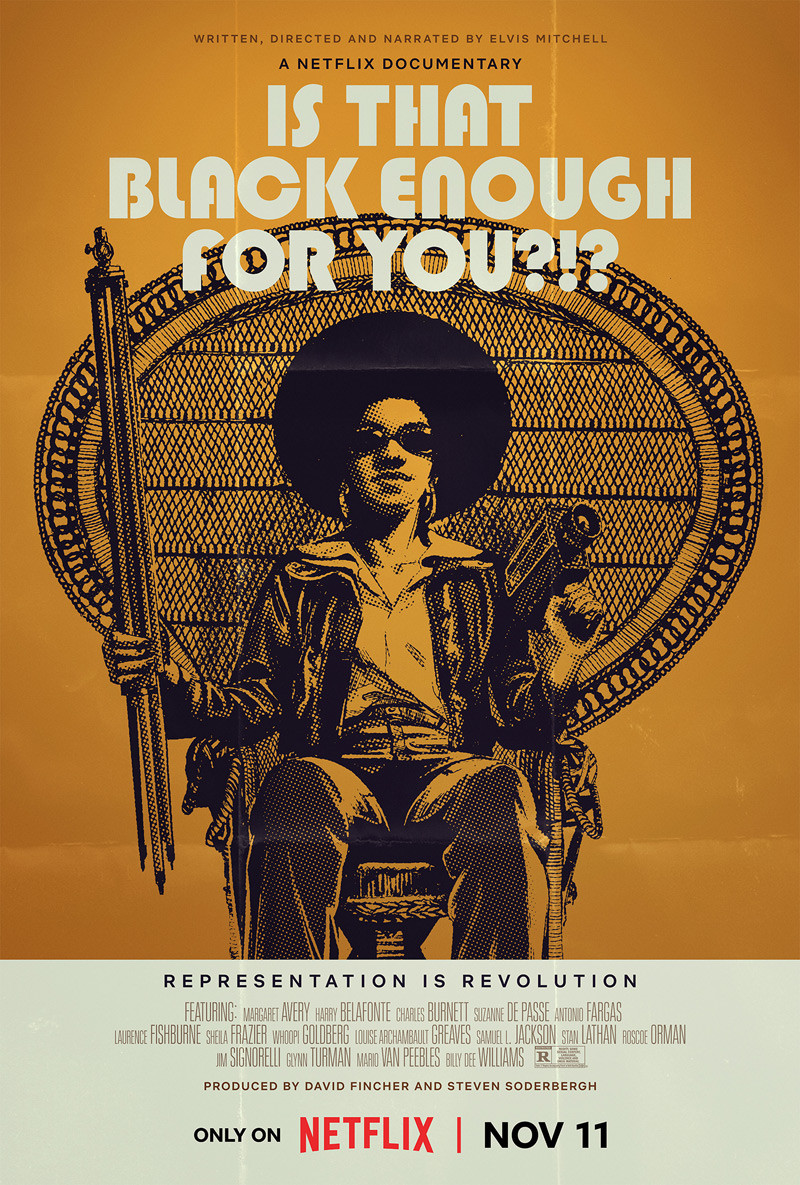 Is That Black Enough for You is one of the most important film docs of 2022.

Is That Black Enough for You is one of the more mindful documentaries on the history of black cinema and there’s been quite a few. Directed and narrated by film critic and historian Elvis Mitchell, this contemplative yet freewheeling documentary observes the rise of black cinema and how it reshaped the world. It’s also not afraid to point out how some triumphs of the past were sadly small. For as groundbreaking and rebellious as a film like Putney Swope might’ve been, Arnold Johnson had his voice dubbed over by the white director Robert Downey Sr. The irony of his son Robert Downey Jr literally playing a black man in Tropic Thunder is a juicy bit of race-relation erosion that Mitchell doesn’t shy away from.

That’s perhaps the best way to describe this doc, touching upon Mitchell’s personal experiences and how he feels about the progression of African-Americans in movies. It’s vicious enough to refuse the dryness of being a just-the-facts film about movie history. Most people would probably note that Mel Brooks’s Blazing Saddles was a real trailblazer. Yet many would probably forget that Cleavon Little didn’t exactly go on to have a long career with future Brooks movies, despite his co-star Gene Wilder going on to star in Young Frankenstein. One can only imagine how Mitchell must feel about the retooling of Blazing Saddles into the animated film Paws of Fury.

Thankfully, the triumphs are worth noting and celebrating for the earthquake of black movies in the 1970s. The usual suspects crop up during this remarkable era of film. Shaft, Black Caesar, Superfly, and Sweet Sweetback’s Badass Song are all presented with brief yet important highlights of how black filmmakers took control of the narrative, directing films that better appealed to the African-American market. The era of Blaxploitation would signal a major shift that could be felt in more ways than one. As Mitchell notes, Blaxploitation was focused more on triumphant and sexy heroes while white American films were currently in a mode centering on anti-heroes and disillusioned heroes.

Of course, it’s not just Mitchell giving his impressions of the history of black cinema. There are some notable interviews present from Margaret Avery, Harry Belafonte, Charles Burnett, Laurence Fishburne, Whoopi Goldberg, Samuel L. Jackson, Suzanne de Passe, Glynn Turman, Billy Dee Williams, and Zendaya. That’s a lot of talking heads and most of them only get a handful of scenes to talk about how much they loved the rising wave of black cinema. That being said, it was a lot of fun hearing the thoughts of Fishburne nearly being cast in Claudine and Harry Belafonte speaking openly about his early roles that were hard-fought. It was also refreshing to hear Whoopi Goldberg being quite brutally honest about how African-American cinema was seen by white audiences.

The film is fast and well-written to avoid harping too long on one aspect of the black cinema revolution. Even for being over two hours long, the film proceeds at a speedy and witty pace. It feels less like attending a film school lecture and more like sitting down with someone at a party giving you the fascinating highlights of this history, punctuated by pitch-perfect cultural jabs. The result is a movie history documentary that jazzes up the audience to get more of a sense for the feel of this resolution rather than just memorizing the dates and names as stock music plays over archival footage.

Is That Black Enough for You is one of the most important film docs of 2022. It touches upon the essentials that most cinephiles are familiar with in 1970s cinema but goes one step further with Mitchell’s evocative personal edge to the narration. Any random YouTuber can run you through the Wikipedia-style filmography of black movies but only Mitchell could deliver this history in a satisfying manner with his own unique perspective.