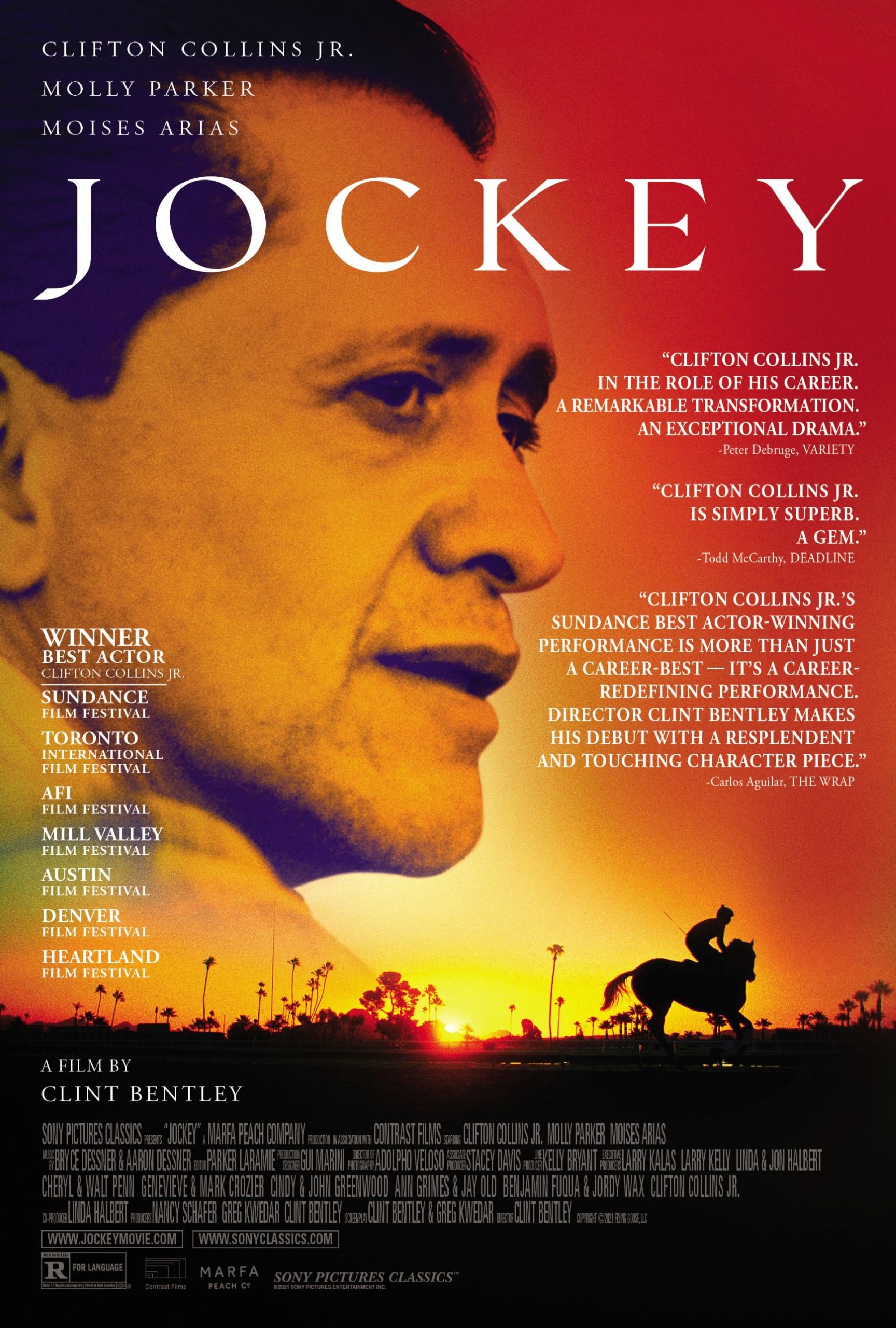 Jockey is one of those tender sports films that find more internally within the athlete than externally in the stadium.

The slow-moving and beautifully shot Jockey is a deeply contemplative picture of legacy and worth. It’s a sports drama but more of a quiet one where there’s less focus on the speed of the horse racing and more observations on the desire to get back to that comfort zone of competition. The script explores this nature of wanting to keep racing ahead to one more race, one more win, and one more chance to let all your worries wash away before our mortal coil is shed. And it’s such a beautiful sight.

The story follows the aged jockey Jackson Silva, expertly played with quiet dignity by Clifton Collins Jr. He finds himself less concerned with his health and more focused on his passion for racing horses. He can sense that his career is nearing an end but tries to drown it out with work. He watches those around him bow out of the profession with age and is reminded that his own clock is ticking. In one of the most powerful scenes, he speaks with a fellow jockey who is in a hospital bed and not long for this world. The dying jockey admits that he’s not afraid of death so much as he’s terrified of never being able to ride again. If he knew the next world was one of horses and tracks, he could die easily. But as long as there’s one more race to be had, men like Jackson will hop back in the saddle against all recommendations of family and doctors.

Jackson doesn’t have any family but that all changes when he’s approached by his estranged son, Gabriel (Moisés Arias). It’s a new chance for him to realize that he has a legacy and that his son may have dreams of also being a jockey. And so Jackson must teach his lessons of preparing for races so that another generation will carry on the sport. At the same time, Jackson also takes on a new horse for an upcoming championship. There’s a lot to learn even in his old age and he takes these new discoveries in stride. However, he may not be ready for the inevitable moment where he must step aside.

There’s great drama in how Jackson struggles to connect with Gabriel. It takes a bit of convincing for Jackson to finally accept his training of his son. Once his son commits, however, Jackson finds himself having a hard time connecting to his son beyond the mere sport. This causes Jackson to become lost in the bottle as he finds any comfort he can in his twilight years. But what ultimately keeps him back in the saddle is the saddle itself. He speaks with Gabriel about how when you’re racing, nothing else matters.

That may seem like a familiar sports mantra of continuing training and jumping into the next championship but it hits powerfully thanks to the direction by Clint Bentley. I really enjoyed how the grand finale doesn’t feature some fast-paced race around the track with quick cutting to showcase whether or not Jackson will win. That’s not important. Instead, the camera focuses entirely on his face, showing how much he is in the moment and loves racing. It doesn’t matter if he wins. This is what he wants to do with his life. This is what makes sense. This brings him the most peace. It’s such a perfect moment.

Jockey is one of those tender sports films that find more internally within the athlete than externally in the stadium. It challenges the commitment to a sport and what we leave behind, as well as coming to terms with our own existence. There’s a terror that remains unspoken throughout this picture yet known through its somber imagery of chores as the sun rises and horseback riding as the sunsets. It may be one of the best films centered around horse racing, for however low of a bar that may be.