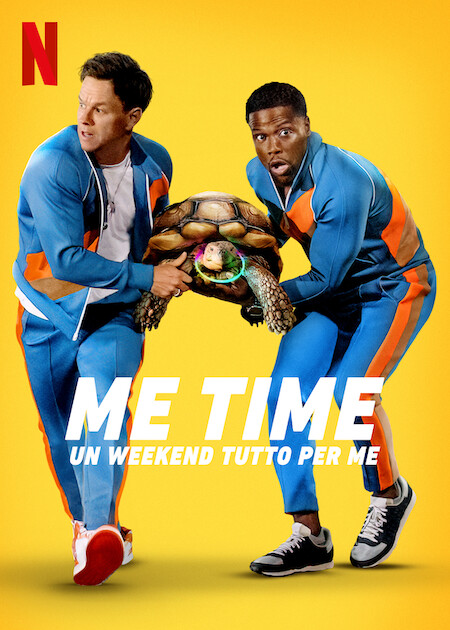 Me Time feels more like another tiresome exercise in Kevin Hart’s meandering comedy, laced with far too much cynicism to find funny.

Me Time is a film that fits into a format that I can best refer to as mindless dad-core comedy. I’m assuming it's meant to be a comedic adventure that will appeal to millennial dads who want a cut-loose movie that appeals to their desires for absurdity and parties. That being said, it’s also the type of comedy with a loser protagonist who endures far more torture than he should for essentially being a devoted dad. It’s really hard to laugh at such a character being viciously slashed by a lion or having his finger smashed with a hammer by debt collectors.

It’s a major fault of this film that Kevin Hart plays such a likable guy that you don’t want to see him subjected to such slapstick and embarrassment. As father and husband Sonny, he’s a stay-at-home dad who keeps his kids on schedule, volunteers at the school, and supports his wife’s busy career. He’s a tad bit pensive but only to those who want to view him as a loser. His less impulsive lifestyle is only called out by either the husband who is worked up about not going to strip clubs or gossipy parents who want to sneer cynically at everyone who doesn’t fit their definition of cool. Sonny’s biggest sin is that he has set his ambitions too high for his kids but, I assure you, nothing that transpires feels like it’s necessary for him to learn not to push keyboarding on his son.

Sure, Sonny is a bit bored that he can’t find anything to talk about at his wife Maya’s (Regina Hall) business dinner. And instead of this being an issue he can work through with his wife, she prefers he go the faster route of just having one wild weekend with his one wild friend, Huck (Mark Wahlberg). Huck is the polar opposite of Sonny, being so brash that he’ll contact Sonny right as he’s getting his kids ready for school and send him a photo of a donkey’s penis, which Sonny’s children will witness. You can pretty much guess where this type of film is going by the time Sonny slips on turtle poop in the same scene where Huck sends him the animal dick pic.

Sonny ends up going on a wild weekend with Huck. They hang out in the desert, hunt for food, outwit debt collectors, wreck a home, nearly kill a turtle, and throw a wild party at his house with special guest singer Seal. Of course, Huck is a recluse party-goer who will take things too far and get his best friend into too much trouble. You can only laugh so many times at Hart and Wahlberg playing off of each other with their clashing personalities.

I would say this ridiculousness is family oriented considering how simple and low-brow it goes with the humor. The problem is that it favors such grotesque routes for comedy. Sonny’s slapstick is incredibly gross where we get lots of close-ups of his claw wounds from a tiger and his broken finger that was crushed with a hammer. There are hills and valleys in this comedy, where Sonny realizes his problems as well as Huck's. The adventure itself, however, struggles to land laughs with all the cynicism slung across the screen. Even when Sonny is at his worst, it still doesn’t feel like he deserves the embarrassment of slipping around in poop and having his kids walk in on him masturbating.

Me Time feels more like another tiresome exercise in Kevin Hart’s meandering comedy, laced with far too much cynicism to find funny. Even on the level of low-brow, where the height of humor is Hart pooping in someone’s bed, it still rarely lands a decent chuckle in its slathering of suburban dysfunction and Bachelor-Party-style hijinks. It leaves a bitter taste in your mouth, like drinking that one wild whiskey drinks your partying friends stress you need to have at the bar. You slurp it down, feel its bitterness, and regret ever drinking it.