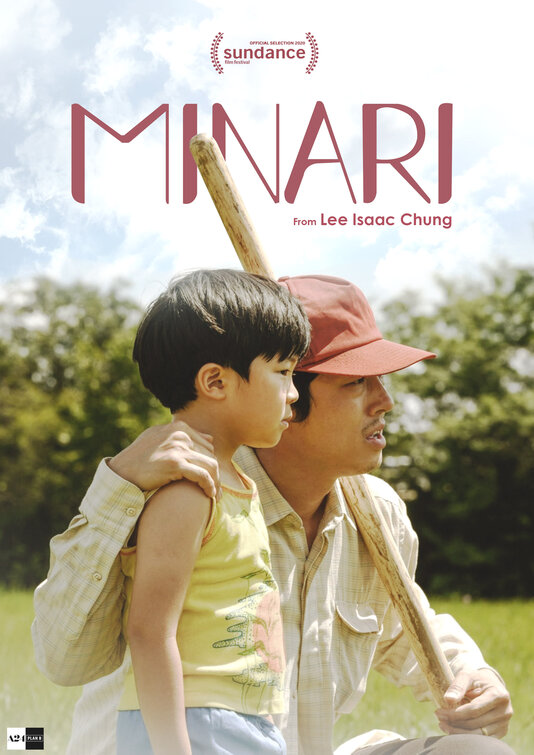 
Minari portrays a much different perspective of the American immigration experience. The first few shots are not so much of the family as they are of the lush green fields in Arkansas. We see the America that everyone views when they peer out into the natural nothing, just waiting for the opportunist to strike. A Korean-American family is hoping that their plot of land will be profitable enough to make their own way.

Well, most of them are. The father, Jacob (Steven Yeun), is hopeful that he can do this. His wife, Monica (Yeri Han), is more concerned about such a move. They have two children to think about, the oldest Anne (Noel Kate Cho) and the youngest David (Alan S. Kim). Monica had hoped to be closer to a hospital given David’s heart condition. Feuds bubble in the household as the farm becomes tough to manage and the family attempts to integrate into the rural area.

Minari takes enough care in its storytelling to slowly reveal the background of the characters while keeping their ambitions front and center. It isn’t until the scene at the bank, however, that we learn this story takes place in the 1980s where President Ronald Reagan is mentioned as being a benefit for farmers. Jacob and Monica take up day jobs checking the sex of chickens and it’s only on their first day of the job that we learn this story is set in Arkansas and that the couple has a history of such work on their resume.

There’s a tension throughout on the nature of assimilation and bitterness that comes with trying to grasp the American dream. Both parents want what is best for their children and don’t exactly see eye to eye on how that will happen. While Monica holds onto her heritage, Jacob tries to embrace the mindset of the white American farmer, pulling himself up all on his own, risking everything to become sufficient.

The kids, however, merely just live day to day, finding pleasures wherever they may come. Sometimes it’s a walk through the woods and sometimes it’s a cold glass of Mountain Dew in the morning. They worry about their parents and their fighting but try to tune it out as best as they can, in a manner that seems very relatable for children.

Bridging the gap between the traditional and modern is the children’s grandmother who comes to stay with them, watching the kids while the parents are at work. Grandma turns out to be a wealth of knowledge that reminds Jacob and Monica of their roots while also trying to introduce their American-born children to Korean food. That being said, she’s not above becoming highly engaged with a wrestling match on television or sharing in the love of soda. David at one point remarks how she doesn’t seem like a grandma because she doesn’t bake cookies. She does, however, know about vegetation and starts a sweet project with him near a stream of growing Minari.

There’s a lot of unexpected joy within such a film as this. Jacob meets his neighbor (Will Patton), an elderly farmer who is incredibly religious, to the point of literally carrying a cross for his Sundays to show respect for god. Though often babbling in his beliefs, he also turns out to be a versatile hand for Jacob to rely on in his farming, helping him with everything from equipment to advice on crops. The family regularly attends a church that is ignorant of Korean culture but still curious enough that sleepovers are in David’s future.

There’s also a lot of pain as well. Steven Yeun delivers a fantastic performance as a man who is so conflicted between his work and family that it only continues to drive a wedge between himself and everybody. There's an exceptionally heartbreaking moment when it feels as though Jacob has reached a boiling point in his marriage and the camera just hangs on the moment, leaving us and the family unsure what move will be made next.

Minari is a picture of hills and valleys for the joys and tragedies of an American family, many of these events coming almost unexpectedly. The film never settles firmly on its pleasures nor does it outright telegraph its woes. Just when it seems like some long-running issue will be resolved, something troubling comes up. Someone’s health will get worse or the crops will go bad. And yet the Korean family continues to march forward, sticking together and keep growing. This is such an immensely touching film that is sure to be a profound and important piece of Americana.