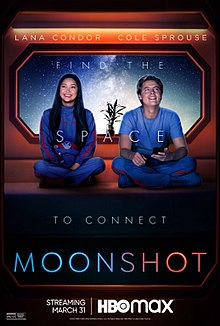 Moonshot has potential but wastes too much of it on one-off gags and bland romantic staging. 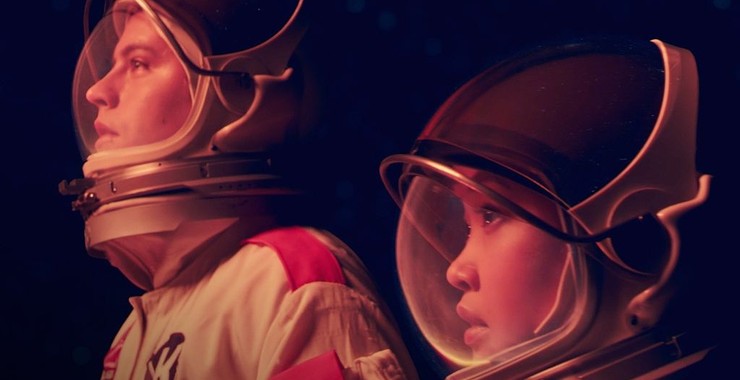 Moonshot is posed as a young-adult sci-fi romance but it actually feels like a comedy trapped inside a small box. It exists in an exaggerated version of the future where big corporations have made space travel possible. It feels like some decent satire is present in there about how only qualified scientists or rich people can afford the trips to other planets. There are some attempts made at mocking this believable version of the future. Sadly, it all feels like a better film is holding back the teen romance angle that feels more mundane than it should.

Cole Sprouse plays Walt, a loser of a young adult who is hoping he can be approved for space travel so he can finally be with his girlfriend Ginny (Emily Rudd). He can’t get approved, however, as he’s smart or rich enough. His days are wasted working at a coffee shop that’s apparently run by a sassy robot, which honestly would have made a great movie on its own. He finds a similar soul with the distraught Sophie (Lana Condor). She also has a boyfriend in space that she's denying being with. After some talk with Walt, however, she remembers that she has enough money to buy a ticket and does so. At the same time, Walt figures he could just sneak aboard Sophie’s transport shuttle and find his way to Ginny.

Aboard the shuttle, Walt tries to play himself off as a scientist who others seem to know more for his written work than his appearance. Sophie reluctantly tries to hide him and make sure he keeps a low enough profile, leading to some antics of him pretending to be somebody smart. It leads to scenes that are a mixture of comedic errors and sincere honesty. In one scene, he’s called upon to deliver a surprise lecture on terraformation. While he stumbles in his presentation, he manages to make a splash by speaking more from his heart than his brain, if that makes any sense.

Naturally, this comedic chemistry between Walt and Ginny leads down a predictable route of right-there-all-along romance. The most aggravating thing about this picture is not that this dynamic doesn’t work so much as it has the potential to work. There are a number of scenes that are written with decent gags that could fit in as small bits for an episode of Futurama or Star Trek: Lower Decks. In this romantic film, however, they come off more like time filler by not adding much to their character. By the halfway point, all of the revelations with their characters are pretty much unearthed.

This leads to a third act that meanders far more than I expected. Walt’s stowaway scheme is discovered by the billionaire Leon (Zach Braff). An apt moment for satire that is spoiled more by presenting this egotistical dominator of technology more as the quirky good capitalist. The result is a film that feels more the futuristic setting and fantastical sci-fi elements are mere pepperings rather than a part of the bigger romantic narrative. That’d be fine if the romance felt genuine but there’s a staleness to the artificiality of the contrived nature.

Moonshot has potential but wastes too much of it on one-off gags and bland romantic staging. It might get a giggle or two but it’s sure to be a forgettable experience considering the competition. It wouldn’t surprise me if this film is confused in the future for being a James Bond movie, which cinephiles will correct as being Moonraker.