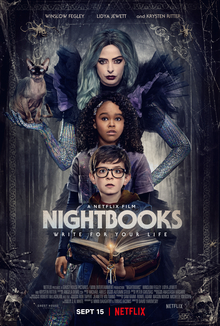 Nightbooks is a briskly entrancing horror that is well-made for the tween audience. 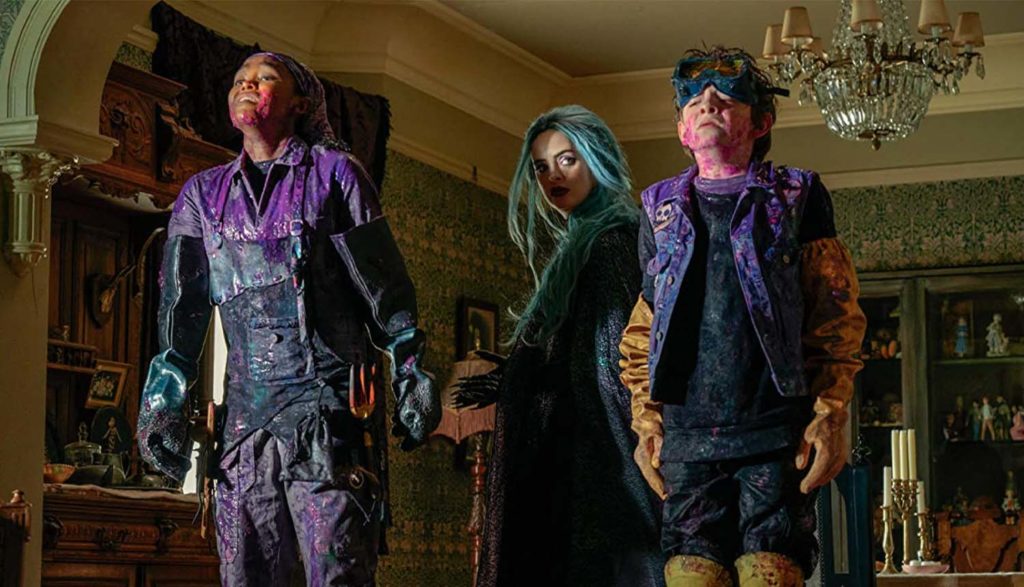 Nightbooks is that rare horror film that feels perfectly suited for tweens. It features young characters but places them in a rather dark scenario. It features terrifying sights but they’re not kneecapped by making sure nobody is in danger. It’s that pleasing sort of horror picture where the kids feel they’re ready for more than just costumes and candy in their fear-based media. This picture more or less treats them as the adults they want to be.

It all starts with the plucky protagonist of Alex (Winslow Fegley), a young boy who enjoys writing scary stories. Well, he used to. He’s currently feeling low and desires to burn up his stories and renounce his writing, having been bullied at school and looked down on by his parents. On his way to destroy his stories, however, he is enticed by pie and the movie The Lost Boys. The combination of his favorite things leads him to be trapped by the witch Natacha (Krysten Ritter). Natacha is enticed to kill Alex unless he can showcase some skill to warrant him continuing to live. When Alex answers that he can write scary stories, the witch is intrigued. She agrees to keep Alex alive in her sanctuary if he can entertain her with scary stories every night.

Trapped along with Alex is Yazmin (Lidya Jewett), a girl who has been there for years. She fills in Alex on the ins and outs of the witch’s house and how escape is impossible. To craft his stories, Alex accesses the witch’s library of various supernatural and scary elements he can use in his nightly tales. And he’ll need to use them as Natacha is a stickler for details. If Alex even gets one minor detail or plot element wrong, Natacha speaks up with aggravation and an “everybody knows that” attitude. Harsh. He’ll have to step up his game.

The stories that Alex tells are not too bad and you really start rooting for him, especially with the highly critical Natacha shooting down all his hopes at being a writer. He tells tales of ghosts on playgrounds and deadly wizards with this rough-around-the-edges quality that feels uniquely imaginative. Alex also struggles to meet deadlines and starts feeling the burn of trying to come up with more stories to stay alive in a manner that many writers are going to relate to all too well.

Yazmin is also a very interesting character as someone familiar with the prison of a witch but still emotional enough to want out. Her quest to escape with the help of Alex is daring and thrilling, especially for one sequence when navigating their way through a greenhouse of deadly creatures. Natacha is a real threat, especially with how she lingers on the flaws of others. Though she later reveals that she needs Alex’s stories to keep a certain sense of dark magic, she also deeply questions why Alex wanted to burn his stories to begin with. Maybe he’s not good enough to entertain. That’s a fear that Alex must face and topple as he stands up for himself to become the next Stephen King.

Not all of Nightbooks works. Sometimes the story settles too easily into central goals. The sleight of hand about those trapped inside the witch’s grasp is not as strong as you can see the twists coming a mile away. This wouldn’t be so much of an issue if the writing didn’t sit on such simple goals of making the witch drink poison or trying to escape her magical realm laced with temptations.

Nightbooks is a briskly entrancing horror that is well-made for the tween audience. It has its moments of terror and whimsy as well as a great sense of horror for mixing in elements of fairy tales and the supernatural. The best part is that it may inspire the younger crowd to take up their pens (or keyboards) and conceive their own horror stories. Don’t worry what the witches may say. Take that leap and make something great.