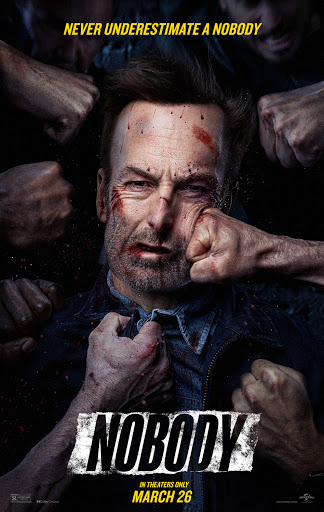 Nobody promises vicious and intense action and does not disappoint.

Nobody (2021) Review By Mark McPherson

Bob Odenkirk has had quite the transformation in the past two decades. He has gone from being a comedic powerhouse on the likes of Mr. Show and Tim & Eric Awesome Show Great Job to becoming the dramatic lead of the Breaking Bad spin-off Better Call Saul. Now here he is in a John Wick style action picture, written by one of the John Wick writers no less. He’s no Keanu Reeves but, well, nobody can attain such a level. It’s also no John Wick in terms of action sequences but what film could ever topple such a masterpiece in bullets and fists? For what Nobody sets out to be, it’s a gritty and giddy bit of bruised-arm action that really makes Odenkirk shine with grizzled guts.

It helps that Odenkirk isn’t really thought of to be an action-built star to make him melt into the role of an unassuming killer. He’s portrays the middle-class worker of Hutch, locked in a daily grind that goes from missing garbage day to punching numbers at work to being disappointed that his wife won’t sleep with him. Nothing seems to go right for Hutch.

He aims to become the owner of the business he works for but isn’t valued by the employees. Despite his daughter liking her dad, his son doesn’t think much of him. And to top it all off, Hutch has just become the victim of a home invasion where he apparently had the opportunity to injure the robbers and didn’t take the shot. Everything about Hutch seems to scream loser from the judging souls around him.

However, much akin to John Wick, Hutch is not who he seems. As it turns out, he was the wrong guy to mess with, having been a hitman for national security. Though this setup seems standard for a they-pulled-me-back-in action scenario, the initial setup before the brutality flies is at least interesting. This is mainly because Hutch really does seem to want to give up that life and doing so means he has to pull back on the violence.

But his fury bubbles to a point that he just can’t contain it. Enraged, he tracks down the robbers to retrieve what was stolen from him. It was really just a watch but he feels as those there’s dominance to be asserted. This is why his revenge comes to a bitterly early conclusion when realizing the robbers are small-timers and desperate to provide for their family.

Thankfully, Hutch soon finds a bigger target. A bus ride turns into a bloody feud and he manages to severely injure a family member of the Russian mafia. The thrill is back but also the danger as he not only becomes a target of the mob but his family as well. After locking up his family nice and tight, Hutch goes straight into attack mode to wipe out the prominent mob boss of Yulian Kuznetsov (Aleksei Serebryakov) and his nest egg of the Obshak.

So, yes, there’s a few obvious similarities to John Wick, including Hutch’s last-scene rescue of a furry pet to showcase that even killers need adorable companions. But there’s just enough quirkiness and wry humor to give the film more of its own personality. It helps that Odenkirk is aided in this escapade by a grumpy RZA with a sniper rifle and a smirking Christopher Lloyd with a shotgun. To think that all three of team up in the climax for an intense shootout has such a satisfying edge for a middle-aged maelstrom of violence.

Nobody promises vicious and intense action and does not disappoint. The scenes are inventive and exhilarating with wild energy coursing through its machismo veins. The humor never harps to long on one bit and keeps the tongue firmly in cheek for most of the picture. There’s might have been something to be said masculinity in the film’s first act of initially placing Hutch as the