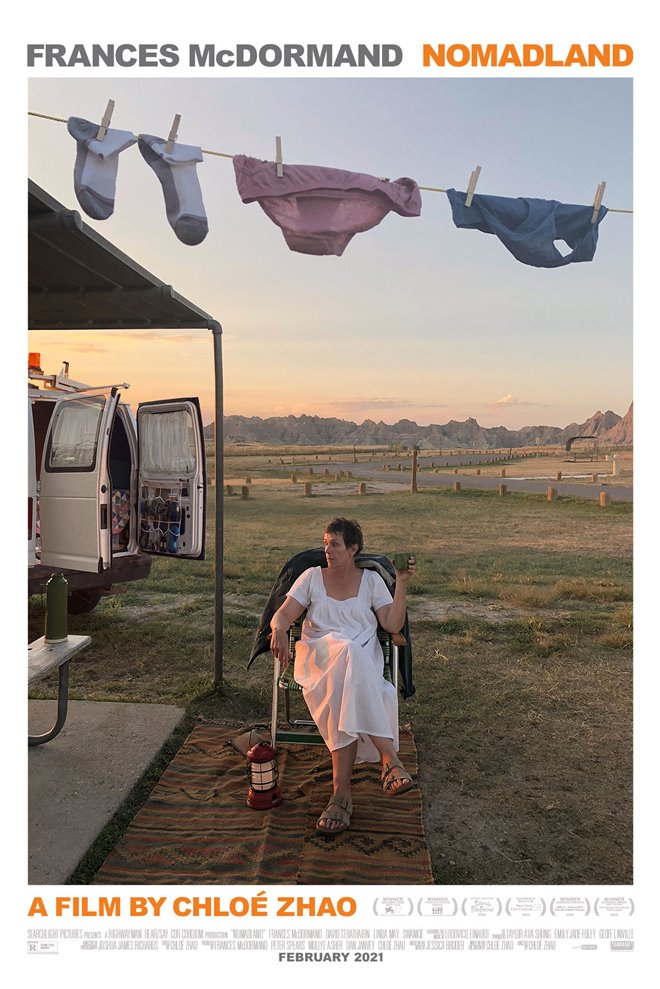 Nomadland depicts a twilight of the American dream. Independence amid such tough times is so hard to maintain that trying to make your own way feels like a lonely journey. The character of Fern (Frances McDormand) is one such person who seems like she needs others. Her hometown has gone downhill so fast amid an economic recession that’s literally been abandoned. With her husband's death and nothing surrounding her home, she sells it all off and lives in her car. Help is offered but refused. It’s not something Fern is used to.

Fern’s journey for work finds herself trekking all across America, venturing from Amazon factory gigs to cooking in kitchens. Her life is filled with quiet contemplation than frustration. Her life certainly wasn’t devoid of people nor does she avoid making friends. She runs into a family at a department store and they chat briefly about her time tutoring. Fern also has no problems getting chummy at her factory job, giving much attention and smiles to lunchroom conversations.

Fern is not exactly alone in the choice of her nomadic lifestyle. She encounters a whole group of similar souls who congregate in the desert, sharing their stories and wears with other like-minded nomads. Many of them are older people who have been living such a life much longer than Fern, giving her some demonstrations in car care and offering up sagely advice. She’s more likely to listen to such people than those who would impose on her to seek charity for her situation. Such a lifestyle allows her to come and go with a balance of the quiet on the road and the casualty of friends met along the road.

There is one person she keeps running into on her travels. David (David Strathairn) finds himself running into Fern more often and is trying to find a way into her life. He wants to help out but she’s not one to accept such continual kindness. Her place of most comfort is work, where her contentment with David is had over grilling burgers at Wall Drug. David’s insistence on helping Fern with her valuables seems far too intrusive.

Nomadland is edited in a very unique way that gives an idea of Fern’s mindset. When Fern is working, her story proceeds quickly, darting from gig to gig at such a pace it’s practically a blur. When she’s off the clock, the world seems slow and quiet. It’s a calmness that Fern seems to both embraces as she wanders about in her contemplative nature.

There’s a particularly poignant moment where Fern finds herself strolling around a caravan of nomads in the desert. She says hi to a few but just keeps walking as the sun begins to rise. She doesn’t have anywhere to be, merely taking a head-clearing walk that takes her from the simple conversations of the nomads to the louder traffic of the road. There’s a certain peace she finds from being mildly distant from everything in the world during this scene, in addition to just being a gorgeous sight to be filmed.

Taking place between 2011 and 2012 after suffering an economic blow, Fern’s life would seem to be one she wants to hold onto. She is offered numerous opportunities to stay with a financially stable family and friends, consistently refusing their offers to bunk with them until she can plant her flag of independence. Yet there’s always that lingering thought that she can never have this life. There’s a particularly gut-wrenching moment when Fern stays with a family complete with multiple generations that include grandchildren. This is a life Fern feels is unattainable and takes one last look at this home as though it were a ghost before heading back out on the road.

Such a film doesn’t try to force a crowbar in a message about how broken the American economic system is since this is well-known by both the audience and Fern. This picture favors instead to let us wander and listen to someone who’s only to her remaining years is that of travel and work, bringing with it a sense of meditative completeness. McDormand’s performance is one of her finest on this level, giving us so much with so little. She peers around deserted plains with a weary voice, unsure of what she’s looking for and what tomorrow will bring. There’s a quiet comfort she evokes from such a role that lets us drink in her daze of purpose with little more than a tired gaze.

Director Chloé Zhao has a masterful hand at crafting an authentic piece of Americana. She taps real-life nomads and non-actors for her story that integrates them into the narrative so seamlessly it’s enough to make one double-take to check if this was a documentary. Zhao also manages to tap the original source material by Jessica Bruder and weave her book into something that’s more emotionally contemplative than just being evocative of such tough times. There are so many unforgettable moments peppered throughout such a film that range from the somber funeral of a friend to dialogue-free walks through abandoned buildings. In terms of a film about how soon we forget a generation betrayed by a world that has abandoned them, Nomadland is one of the deepest and most profound observations on the subject, opting to observe and listen than preach and provoke.