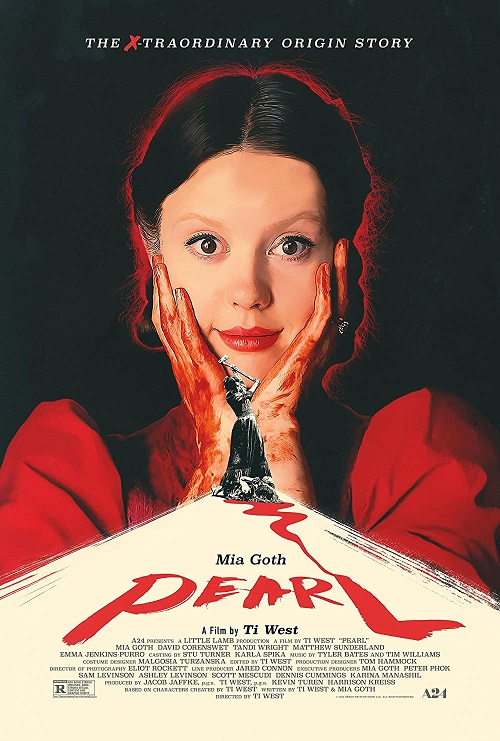 Pearl is a powerful dose of retro horror that is a suitable successor to X. 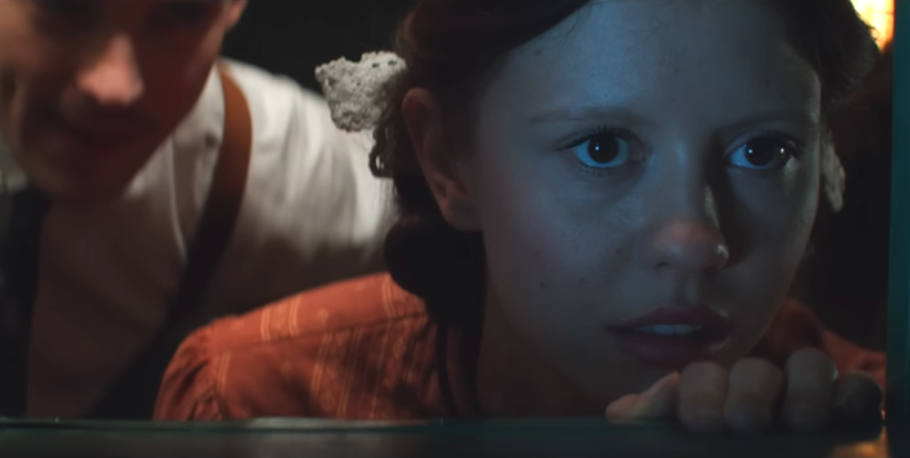 Around the same time that Ti West was filming X, he got the great idea to film a prequel to expand on the killer character Pearl. Before X had even finished, West and actress Mia Goth cranked out a prequel/origin story script in two weeks. For being written in such a short time, it’s amazing how much of a stellar picture West churned out after just finishing an already exciting and gritty horror.

It helps that Pearl feels more like its own film rather than just replicating the same style as X. The story shifts from the 1970s to the 1910s, where Pearl (Mia Goth) was much younger and had a shred more innocence than the youthful farmgirl. She lives on the farm where she is cared for by her shrill mother and needs to look after her ill father. Her husband is serving in World War I and she has little hope he’ll return. Her life looks dull and bleak. The only thing that keeps her going is her dream of becoming an actress, hoping to see herself on the big screen for a musical picture.

Before Pearl’s life turns violent, we can already see the makings of a killer. Her desperation and hidden desires lead to many explosions of repression in private. When her mother isn’t keeping an eye on the farm, she takes the opportunity to kill some of the animals and feed them to her friendly gator in the swamp. When riding her bike home through the cornfields, she stops by a scarecrow for a moment of dancing and sexual pleasure. This boiling nature of desiring more from life is what will ultimately lead to her darker paths, where it seems like the only way to get what she wants is to literally fight for it.

The film touches on the draining nature of the world and the urge to escape it in any way. After all, Pearl exists in America where war and the Spanish flu are on everybody’s minds. On her trip into town to buy more medicine for her father, she stops by the cinema to take in a movie. Here is where she feels most at home and the local projectionist (David Corenswet) can see that in her eyes. He takes a liking to her love of film as well as the romantic bond between the two. They connect so well that in another life they might’ve been lovers. That love may still be on the table but not when Pearl’s urges get the better of her.

West’s film feels rather unique in how it adopts the aesthetic of classic Hollywood, where the titles roll in full for the opening and the soundtrack evokes an almost whimsical state. The cinematography is astoundingly vibrant, evoking powerful colors and contrasts evocative of the era of technicolor. In addition to looking at the time period, the film also becomes experimental enough to have its own vibe. This leads to stellar sequences as with Pearl’s fantasy of being a dancer and her split-screen montage of disposing of dead bodies. But even before the film gets its juicier moments of blood and guts, there are some rather intense exchanges she has with her rival competition of the blonde Ruth (Tandi Wright). One of the best scenes is where Pearl opens up to Ruth and reveals more than Ruth is able to handle from this shocking monologue.

Pearl is a powerful dose of retro horror that is a suitable successor to X. It draws from all the trademarks of the previous film without feeling like a retread or origin story that requires foreknowledge. It’s also immaculately shot, brilliantly written, and isn’t afraid to go the extra for violence, gore, and sex. The film is worth watching for Goth’s performance alone which is one of the best horror performances in the last decade.