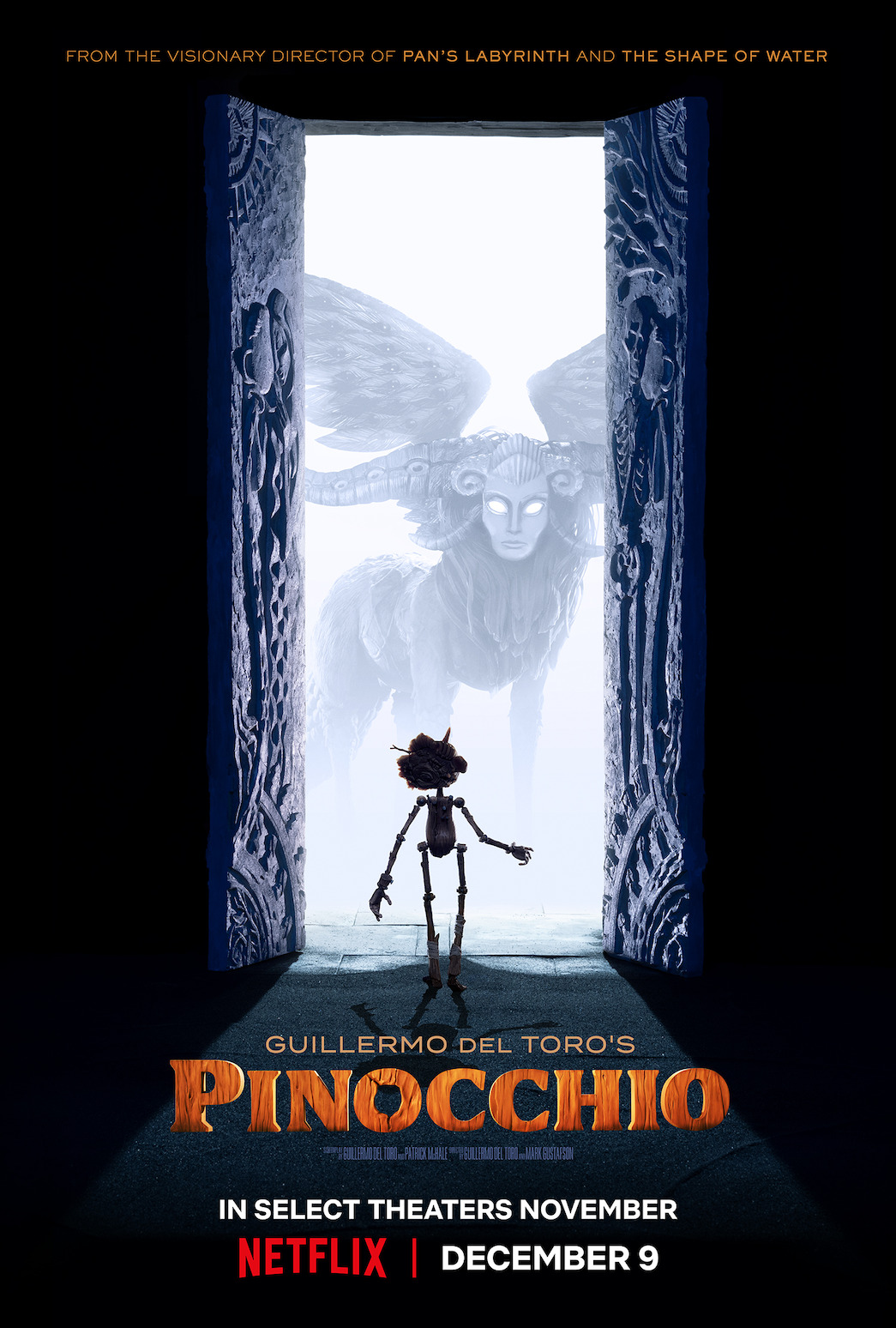 Pinnochio is a refreshing dash of darkness and politics placed on an old story, giving it a refreshing new coat of paint. 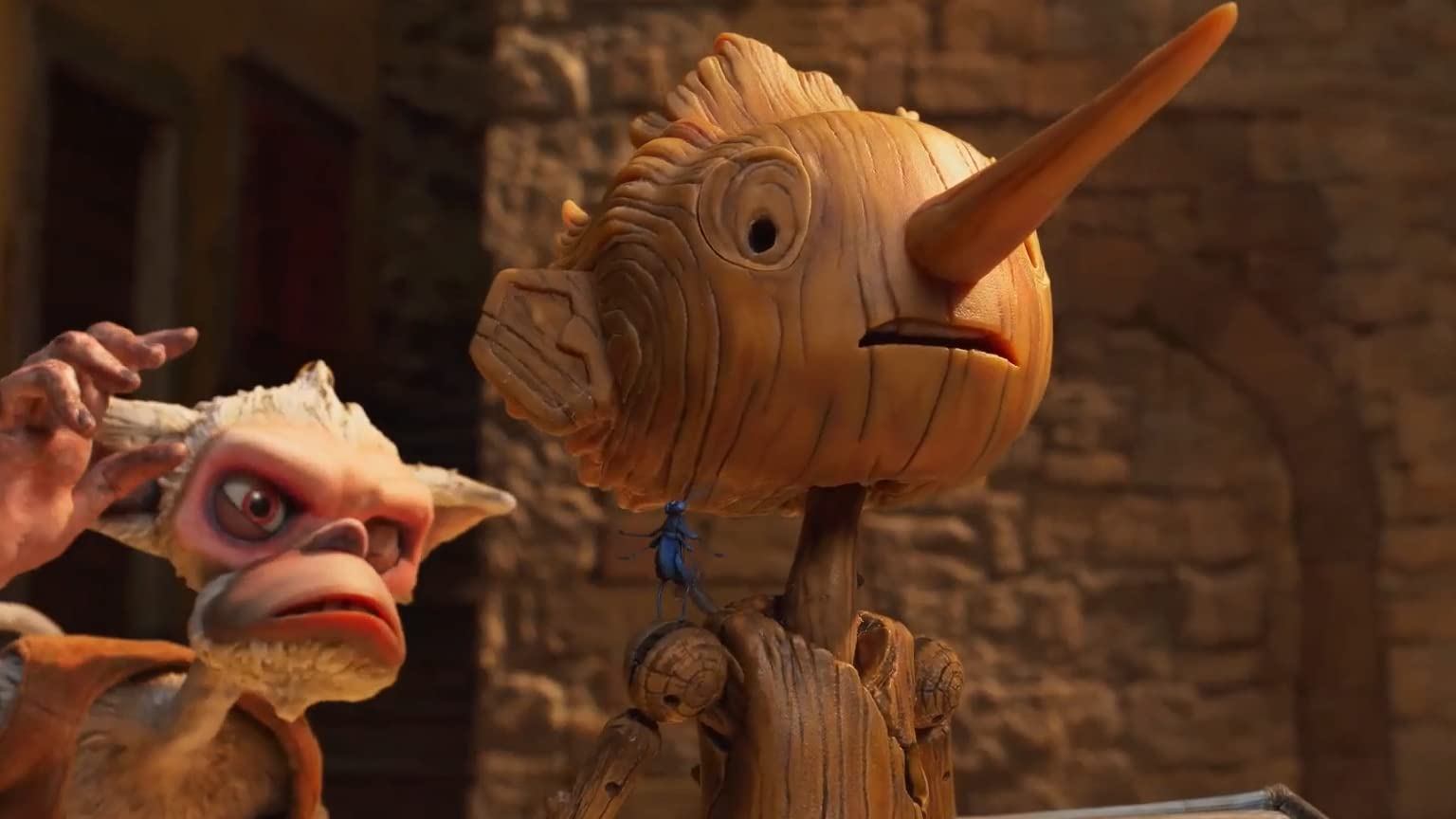 Also known as Guillermo del Toro's Pinocchio, this version of the classic tale certainly feels like the punchy fantasy one would expect from del Toro. Far from the cheap retread of Disney’s Pinocchio film this year, this stop-motion interpretation finds more enticing elements to explore with the character. Namely, why not place him in fascist Italy and learn all about the horrors of war and the crisis of death? That’s dark for a children’s animated film, but del Toro always has a penchant for crafting stories that feel real and vicious with honesty. The result is one of the better interpretations of Pinocchio rather than regurgitating the same recipe over and over.

The pathos sets in from the first few scenes by establishing Master Geppetto (David Bradley) as a drunk old man dealing with the death of his son. We get to see those scenes of his fatherly love amid the Italian town and how hard it throws him into the depths of sadness. Following his many days of grieving, Geppetto chops down a tree and rebuilds his boy like Frankenstein. It’s only once the aspiring writer of cricket, Sebastian J. Cricket (Ewan McGregor), strikes a deal with the Wood Sprite fairy (Tilda Swinton) that the wooden boy comes to life.

While this is a miracle, Geppetto is understandably frightened of this new member in his home. After all, this Pinnochio is not the same boy Geppetto raised. The rest of the town also takes notice of Pinnochio and has their own plans for him. Count Volpe (Christoph Waltz) wants to dupe Pinnochio into joining his traveling circus by promising riches and denying them later. The Podestà (Ron Perlman) views Pinnochio’s apparent immortality as an asset to the fascist military and his childish understanding of the world as a threat. Both sides compete for Pinnochio’s allegiance, and poor Geppetto feels ill-equipped to protect his wooden boy from the horrors of the world. These are some tough lessons he’ll have to learn on his own.

The stop-motion animation by the notable studios of ShadowMachine (Robot Chicken) and The Jim Henson Company (The Muppet Movie) is a remarkable display of the medium. Their long noses and angular features make these characters look far different from any other story interpretation. It was great to see more of a bitter Geppetto and a Pinnochio whose nose sprouts more of a chaotic-looking branch. The supernatural forces are also rather unique, given that Pinnochio speaks with the spirit of death, which appears like an emotionless sphinx that appears in a manner both intimidating and comforting.

While a bit freewheeling, this Pinnochio has a greater story to tell. This satire of fame, greed, and fascism is bold enough to be enticing yet easy enough to read for younger audiences. The decay of fascism is best showcased in how easily the authoritarian asserts itself during a game among the boys where a tie is not accepted. Pinnochio’s innocent questioning is brilliant in asking all the right questions that challenge authoritative figures that work on the evilest of intentions. This leads to a great scene where Geppeto finds himself so frustrated that he can hardly bring himself to explain to Pinnochio how such a messed-up world works. The film does all this deep questioning while still producing a thrilling escape from the more monstrous version of the sea monster who swallows up Geppeto and Pinnochio whole.

Pinnochio is a refreshing dash of darkness and politics placed on an old story, giving it a refreshing new coat of paint. The best version of Pinnochio is not asking what the story can do for them but questioning what they can give to the story. Directors Guillermo del Toro and Mark Gustafson succeed at crafting a film that doesn’t feel like a strict childhood story but the coming-of-age story it deserves to be, showcasing the troubles of growing up while still highlighting the errors of adulthood. It’s also just a good-looking animated film for an incredible amount of detail and expression placed in the fluid stop-motion materials. Kids deserve more animated films as bold as this one.