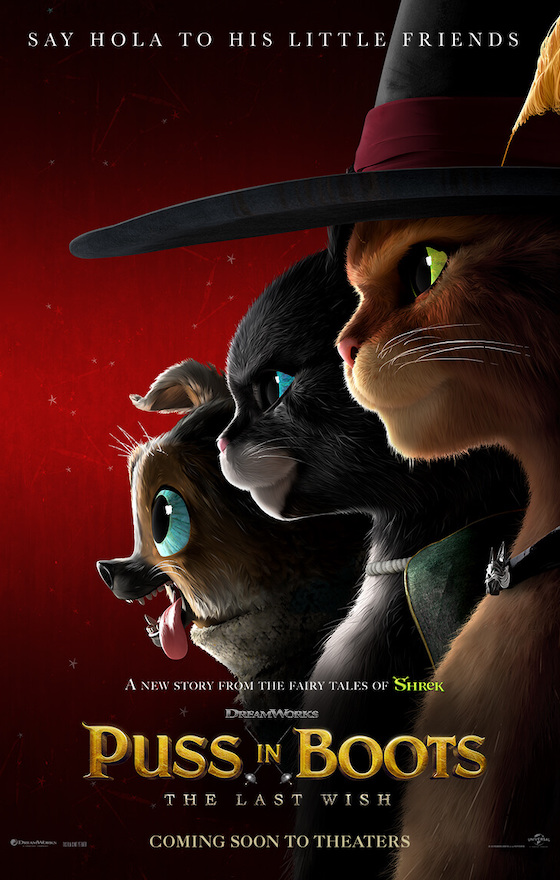 Puss in Boots: The Last Wish is a vibrant victory for this old cat.

Puss in Boots: The Last Wish (2022) Review By Mark McPherson

While it is instead telling that the framing device of The Last Wish is that the cat hero is getting old, there's a freshness to this Shrek spinoff. It could be the dynamic animation that creates far more striking visuals. Maybe it's the more resounding theme of confronting mortality. It could be the far clever usage of fairytale characters. Maybe it's all that. At any rate, this sequel of a spinoff succeeds at far more than animated busy work.

Puss (Antonio Banderas) continues his rollicking as the bad boy of a fantasy world, holding chaotic parties in kingdoms and warding off all monsters. But the cat swordsman is getting on in years, and his lives are running out. As Puss soon learns, he’s been so brazen about never dying that he never bothered to count the nine lives he’s used up in his adventures. As a doctor notes, he’s down to his last life. It may be time to hang up the hat, boots, and swords for this adventuring kitty. This aspect becomes all the more pressing when the literal spirit of Death (Wagner Moura) starts stalking Puss, waiting for the cat to spend his last life.

Feeling like his life of fun is over, Puss resigns himself to a crazy cat lady’s home. While there, he meets the eccentric therapy dog Perrito (Harvey Guillén), an eager fan who still believes in the legendary nature of Puss. Only once Puss catches wind of a fallen wishing star holding the power of wishes, he believes there may be a chance to continue his adventurous lifestyle and go back to laughing at death. The problem is that he’s not the only one hunting for that star.

Kitty Softpaws (Salma Hayek) is a cunning cat thief who becomes the biggest rival for Puss. Not only can she match his wit and skills, but she may also be a cat worth falling in love with. The biggest threat to them is Jack Horner (John Mulaney), now grown into a towering giant of a mob boss who collects various fairytale artifacts. With an arsenal of magical items at his disposal, Jack tracks down the star using everything from the fire of the phoenix to the pumpkin carriage of Cinderella. There’s some decent milage from this concept, leading to some surprising deaths of Jack’s minions, who suffer the worst fates, making him the easy villain to hate.

The villains you learn to love come from Goldilocks (Florence Pugh) and Three Bears (Olivia Coleman, Ray Winstone, Samson Kayo). Run more like a street gang; Goldilocks is a brash leader with her staff and poofy hair. Her bears act more like kindly enforcers, fluctuating between politely asking and viciously growling when extracting information. As with Puss and Kitty, she’ll also have to learn the value of friends and family over her selfish needs, putting a new spin on her interactions with bears and their preference for houses.

In addition to the colorful characters, the animation has a nifty dose of innovation in its imagination. The action sequences stand out for Dreamworks, adopting a reduced framerate and dynamic staging, adopting techniques similar to Spider-Man: Into The Spiderverse. Meanwhile, the simpler moments of expression and playfulness are given smoother framerates and immaculate detail in the many whiskers of the fur and specularity of the eyes. It’s a beautiful way to make the film eye-catching, especially with how the quest involves a map that changes the structure and themes of the adventure itself. This leads to a rather epic showdown as the center of the wishing star is a magical arena brimming with color and wonder.

Puss in Boots: The Last Wish is a vibrant victory for this old cat. Having been around in the Shreck franchise for many years, it’s refreshing that the character has grown enough to inhabit a story punctuated more by existentialism than just funny fairytale parodies. It was also hilarious watching Jimminy Cricket’s patients for finding the good in people put to the ultimate test with a narcissist like Jack Horner. It’s an animated adventure that can have its pie and stick its thumb in it, too.