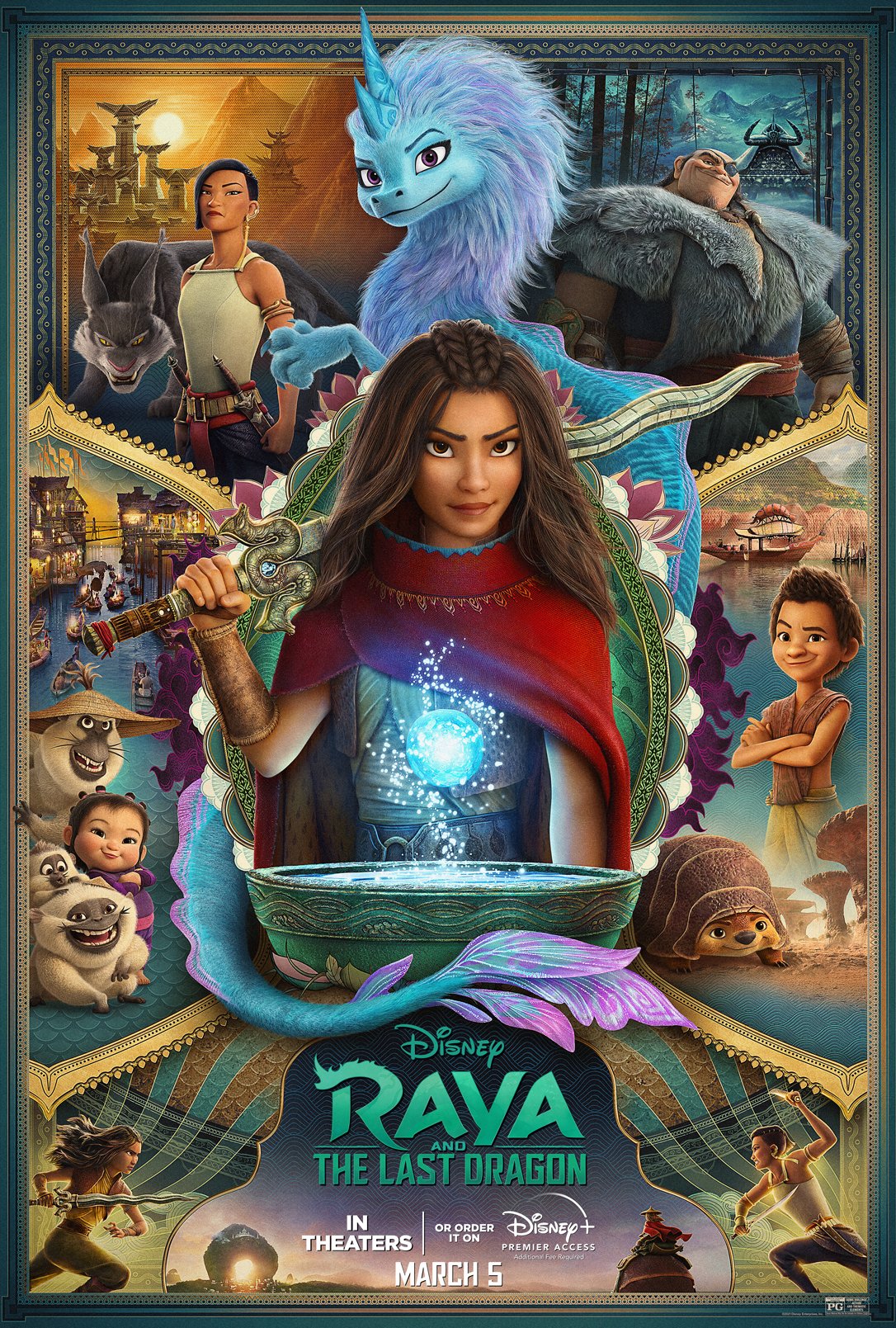 Raya and the Last Dragon Review

Raya and the Last Dragon (2021) Review By Mark McPherson

After both the Disney princess convention (Frozen) and subversive ribbing (Ralph Breaks the Internet), the Walt Disney Animation Studio treads into much different territory with Raya and The Last Dragon. Free from the usual tropes, this film feels less like a Disney-fied attempt at fantasy-adventure and a genuinely appealing epic. While such favoring of a more emotional and action-driven story is a strong tonal shift from the studio’s lighter features, it’s all the more welcoming as a picture that will not only appeal to kids and adults but is sure to become a revered sleeper as the younger crowd becomes older.

The fantasy world of Kumandra is one of humans and dragons. Or it used to be. 500 years ago, some mysterious dark mass-consumed the land and turned people and dragons to stone. The only way to stop it was for the dragons to sacrifice themselves and give up their powers into a single orb. The orb has since split the humans into tribes that still battle and feud to claim the remaining dragon magic in the world.

Those 500 years have reshaped the world that Raya (Kelly Marie Tran) can only see violence in her future, eager to prove her fighting skills in defending her kingdom of Heart. Her tribe chief father Benja (Daniel Dae Kim) has a much different outlook, trusting that peace among tribes is in their future. That trust is shattered when the orb splinters and the factions become even further divided. More importantly, however, her trust in others has been broken.

As Raya wanders the world seeking a means to save it, she’ll eventually discover the missing dragon of Sisu (Awkwafina), an eccentric and spirited creature. Sisu requires the rest of the magical orb to restore her powers and accompanies Raya on a mission to do just that. The two are mismatched as Sisu has so much trust in people she figures she can walk right up to these warring clans and simply ask for their precious treasures. Raya favors a route of stealth and force, believing Sisu trusting nature to be more of a hindrance than a strength.

The world of Kumandra that Raya and Sisu travel is an astounding sight. Each tribe, named after a different part of the dragon’s body, has its own unique flavor. Talon is a harbor city with a bustling trade community while Fang is an island of cream-colored decadence. Everything from the architecture to the clothing to the color palettes of every tribe has a distinct look so the journey isn’t a drab one through samey lands and people.

Raya’s journey is made all the more compelling in how she fights for the shard of each tribe but also gains an ally from each. Though they range in age from veteran warriors to toddlers, all of them have a commonality in that they’ve suffered a loss. Just as with Raya, they’re driven to restore the world and fight back the evil that has robbed them of their loved ones. Every character Raya runs across seems bound by desperation in their actions, fearing for themselves and others if they don’t act quickly and aggressively.

This aspect is especially true for Raya’s rival of Namaari (Gemma Chan), a warrior leader of the Fang tribe. Raya had initially known Namaari as a friend but that friendship was soon betrayed and led to further tension between tribes. Namaari has been blinded by the protective nature of her clan to see past the fog of war and learn to place trust in who can restore the world. She has much in common with Raya considering both their issues of defending their people could lead to their own downfall.

Raya and the Last Dragon is one of Disney’s more earnest and exciting features considering how divergent it is from previous pictures. There’s plenty of action involving swords and crossbows yet the film ultimately strives towards a non-violent conclusion while still being a story about loss. There are wonder and charm to the dragon Sisu yet a relatable facade of not feeling worthy and losing faith in others and yourself.

This kind of film is so uniquely distinct from the usual Disney affair I suspect it’s destined more to become a sleeper better appreciated with age than be tagged with the same popularity as the studio’s other productions. This is the type of compelling adventure that seems more likely to come from an underrated studio such as Laika or Cartoon Saloon. The fact that Disney has pursued such a prospect offers hope that there’s more to big-budget animation than quips and musical numbers. Those are fine now and then but sometimes you just have an urge to watch a nomadic sword-wielder go on an adventure with a magical dragon. Raya satisfies that thrill and then some.