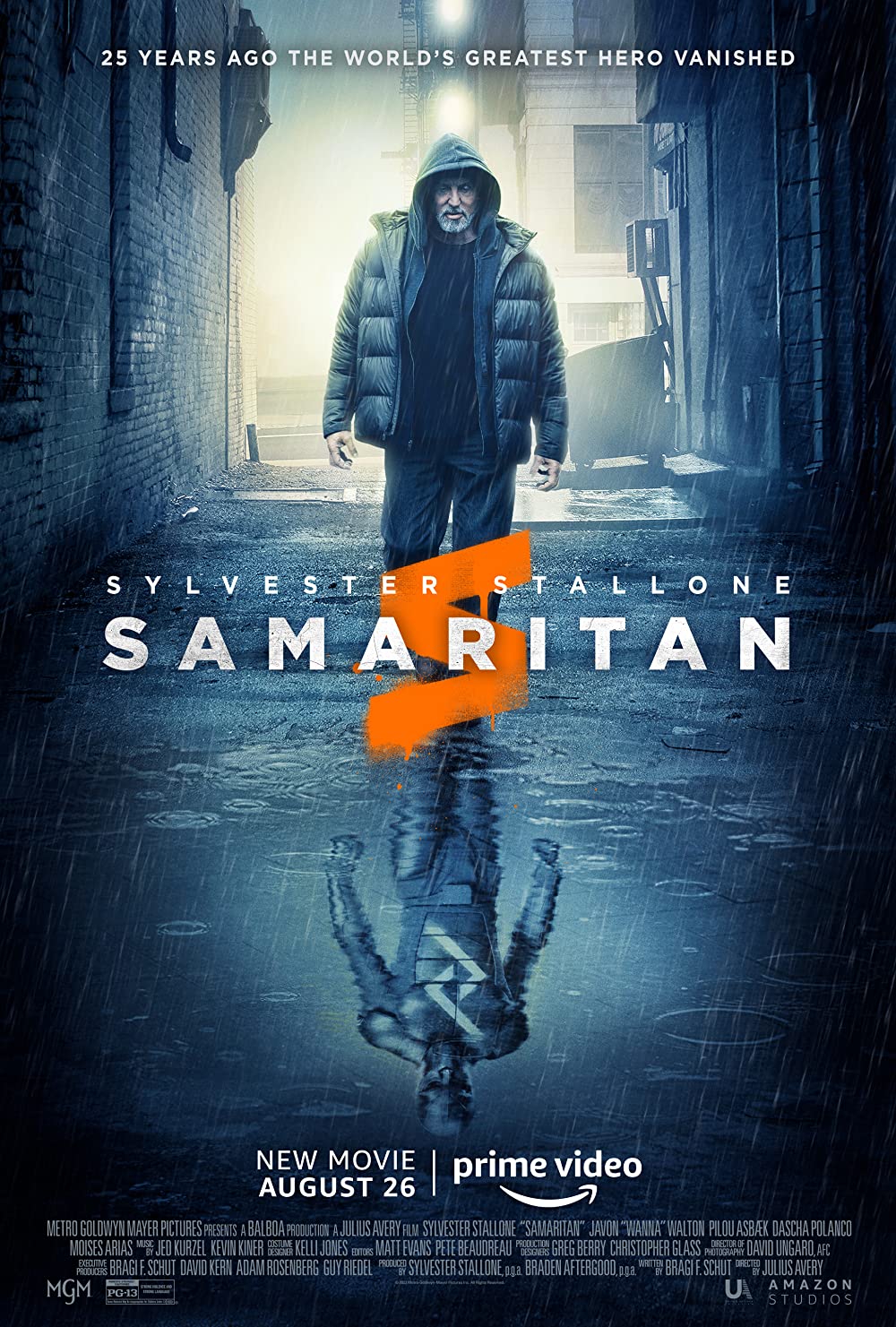 Samaritan is the Rocky V of superhero movies and that is not a compliment.

Amid all of the superhero movies that crowd the 21st century, Samaritan feels like a bit of a throwback superhero movie. This is a picture that doesn’t want to be a 2020s superhero movie but a 1990s superhero movie. It’s portrayed as gritty enough to aspire to the levels of 1989’s Batman yet too cheap and goofy in its staging to ever feel the grit of its seriousness. The result is a rather generic superhero movie with the most underwhelming of stagings and twists.

Set in the grimy corners of Granite City, twin brothers were long ago locked in a war of good and evil. They were Samaritan and Nemesis, costumed superhumans who engaged in combat where they punched each other real hard. Both were killed but not really. The one thought to still be Samaritan is Joe Smith, played with solid haggardness by the always-gruff Sylvester Stallone. He is discovered by Sam Cleary (Javon Walton), a down-on-his-luck teenager whose mother can’t make rent and his fists can’t best bullies. So when he discovers that Joe possesses the ability to punch people into dumpsters and can set his body on fire, Sam is excited to finally have a superhero on his own block.

Samaritan, of course, wants to place that world behind him. He’ll have to come out of this retirement, however, once the villainous Cyrus (Pilou Asbæk) inspires violence in the city, rising back to his title of Nemesis. With his powerful hammer in hand and his silly mask back on his face, Nemesis inspires fear and hatred in the streets. So it seems like the twins will fight once more but not before Joe teaches Sam how to do some fighting.

Samaritan is a film that is far too simple to ever feel exciting, even with a comic book-style opening complete. Perhaps that should’ve been the first red flag considering there isn’t any matching sense of visual flair throughout the picture. The rest of the picture remains grimy but well-lit, making for a film that looks as bland as it does ugly in its staging. There’s a maddening clash of styles with this framing, where the film wants to favor superpowered characters in costumes engaged in fantastic combat but still wants to make it feel like a gritty picture of gang wars.

The fights themselves are okay. There’s a clever reveal of Joe admitting to his past when he is hit by a car and his body repairs itself, leading to Joe begging Sam for water and ice cream to cool his body. That’s not a bad reveal but it mostly just leads to Stallone explaining his powers while casually eating ice cream. There’s no witty comment or absurdness layered on this scene because it feels like there’s this constant need to keep the film dark and serious. But, really, how much grit can you expect with a generic villain demanding chaos and two feuding twins who fought in costumes fit for a comic book? All the punches, gunshots, and an abundance of explosions can only do so much in a film that only goes for the broadest of themes. It’s also incredibly aggravating that this film uses the class divide as a backdrop for the violence and never reaches any greater level of tackling these issues. I just can’t stand it when unemployment and economic despair are literally treated as background noise, where characters listen to this news on the television and don’t really say anything about it.

Samaritan is the Rocky V of superhero movies and that is not a compliment. It’s a similar story about an over-the-hill fighter teaching a kid to fight while fighting for the neighborhood but more for himself. It’s an incredibly forgettable film that it’s all-too-fitting that it carries a forgettable title, perhaps only being remembered as the failed Stallone comic book movie that wasn’t Judge Dredd.