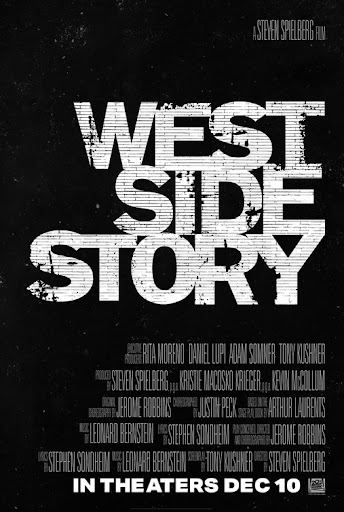 Spielberg’s West Side Story is still a musical reprisal but still a dazzling reprisal.

It may seem like an insult to say that Steven Spielberg’s take on West Side Story is true to the original and doesn’t diverge much from the original film. His style is certainly present but Spielberg isn’t known for musicals. What he shows off here is both his love for musicals and the fact that he can pull off a musical in his wide range of genre-jumping.

The story remains the same as the 1960s musical movie. The gangs of the Jets and Sharks are duking it out for territory in the colorful yet violent streets of 1950s New York City. Tony (Ansel Elgort) is a former Jet who is hoping to turn his life around. Maria (Rachel Zegler) lives in Sharks territory and finds herself infatuated with Tony. They fall in love but their love is a star-crossed romance when they reside on different sides of New York. Separated by racial tensions, the two find themselves conflicted about how to keep their love alive when their people are violently killing each other for territory in a brutal battle for a crumbling and shifting New York.

From that description, one might mistake this story for being a darkly somber retelling of Romeo and Juliet. Even if you’re aware of the original, you might still believe this film to take such a route as a 21st-century film version. Thankfully, Spielberg keeps just about everything from the original. All the music by Leonard Bernstein is still present, given an honorable polish by composer David Newman. This includes such earworms as “America” and “I Feel Pretty,” still just as pleasing to the eyes and ears, especially with Spielberg’s robust, detailed, and fast-paced direction.

A major downside to the picture is the casting of Ansel Elgort in the lead. Aside from his current controversies regarding sexual abuse, he’s just not that good. He tries to put a charming face on Tony but struggles to muster a conflicted character. He tries to sing and gives it his best shot but doesn’t quite have the chops. Just watch the duet he shares with the superior Zegler and marvel at how she literally towers over him during their catwalk flirtation.

The supporting cast, however, really does steal the show. Ariana DeBose eats the screen alive with her feisty, emotional, and exuberant performance as the passionate Anita. She’s in love with the troublesome Bernardo (David Alvarez), mindful of her roommate Maria, and can’t wait to cut a rug with a flowing dress. She leads the most dazzling of musical numbers during the “America” sequence, where she leads a dance in the street while kicking up her fantastic dress. It’s been said that this scene was shot during one of the hotter days of New York and that sweat stains had to be digitally removed. The removal is seamless but one has to wonder just how steaming the streets were when watching Ariana’s fantastic moves.

Oh, and you absolutely cannot forget the heart and soul of the picture with Rita Moreno playing Valentina. Everything from her small conversations with Tony to her moving solo of “Somewhere” wafts over the viewer like a warm blanket. Every time she was on screen made me smile with delight to see such an accomplished actor still dazzling the screen. Other notable roles include Mike Faist as a pitch-perfect Riff and Brian d'Arcy James bringing an ample amount of bluster to Officer Krupke.

Spielberg’s West Side Story is still a musical reprisal but still a dazzling reprisal. The direction is astonishing, the music still charming, and the acting a real treat, even with the weakest link of Elgort being a lead. Watching this picture on an IMAX screen was an absolute delight and there’s a fascinating update to such a story that isn’t afraid to go bi-lingual with English and Spanish, as authentic Latino actors take on the Latino roles. It’s a musical that reminds you of the joys that come with seeing a movie become big, bold, and beautiful with scenes that will linger, even if they’re ones you’ve seen from the 1961 original. Spielberg’s cover is one you won’t want to miss.