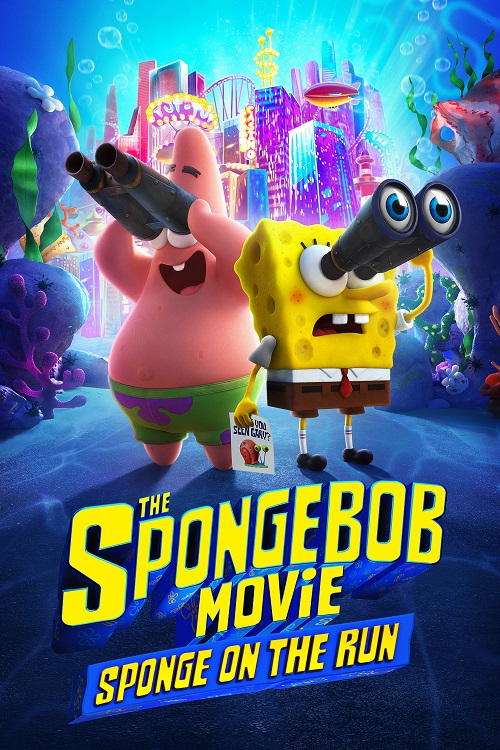 Sponge on the Run tries to run with its premise but mostly stumbles.

The SpongeBob Movie: Sponge on the Run (2021) Review By Mark McPherson 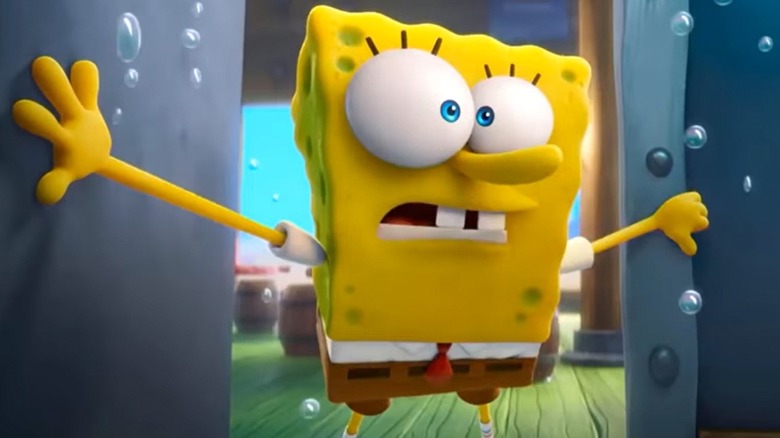 Sponge on the Run is the third and by far the weakest of the SpongeBob Squarepants movies. It was bound to happen. After the series has gone on for so long and soon to cross the record of movies for a Nicktoons series (it’s currently tied with Rugrats), some quality is bound to be lost. Sure, one could easily complain that this film loses its edge because it’s entirely in CGI rather than the wacky 2D animation of the series. But only a minor issue compared to how the rest of the film proceeds.

SpongeBob (Tom Kenny) is once again established as the happy-go-lucky fry cook of the underwater town of Bikini Bottom. He’s still best friends with his starfish idiot Patrick (Bill Fagerbakke), neighbor to his bitter coworker Squidward (Rodger Bumpass), worker to the greedy crab Mr. Krabbs (Clancy Brown), and friend to the scientist squirrel Sandy (Carolyn Lawrence). He also has his best friend Gary, a snail who meows like a cat. If anything happened to Gary, Spongebob would be crestfallen. And that’s exactly what happens.

The Greek god of the seas Poseidon (now voiced with the smooth vocals of Matt Berry) needs Gary’s snail trails to act as a moisturizer to keep his skin free of wrinkles. When Gary is stolen, thanks to the evil efforts of the conspiring villain Plankton (Mr. Lawrence), SpongeBob and Patrick go off on an adventure to Poseidon’s Atlantic City, clearly representing the city of vice with neon lights and casinos.

The adventure feels very lacking for hitting most of the same notes seen in previous movies. We’ve got awkward celebrity cameos that are mostly fun for the fact that they’re even present. The biggest celebrity cameo is Keanu Reeves playing a tumbleweed named Sage. He provides insight for Spongebob’s quest but also just passive insults. It’d be funny if Keanu didn’t seem so awkward in a role where he doesn’t really come out of his shell as much, remaining more as a low-key wizard whose anger doesn’t feel as pronounced. There’s Danny Trejo as an evil cowboy in an aside Western subplot that isn’t as funny as it could’ve been. Tiffany Haddish voices a master-of-ceremonies character whose only joke is that she’s only in this movie “for the halibut.”

All that is par for the course but there’s hardly a moment that catches you off guard. The other Spongebob movies always had that surreal moment of silliness that surprises. In the first film, it was Spongebob and Patrick nearly dying under light and also hitching a ride with David Hasselhoff. In the second film, Spongebob ventures to the center of the galaxy and interact with the grandmaster of everything who is a dolphin voiced by Matt Berry. The dolphin needs Spongebob to watch the universe while he goes to the bathroom. Fun stuff.

What weirdness is present in Sponge on the Run? Well, nothing really. In fact, because Matt Berry returns, there’s this added longing for something more. Berry’s voice can be made great use of for silly things to say and do. Here, he’s just playing stuffy royalty who needs a friend. The whole script more or less just plays to the typical mannerisms of the characters and a little more.

Even worse, there’s a trial in the third act where Spongebob’s past is explored through his time at Camp Koral. Camp Koral, by the way, is a spin-off series meant for younger viewers and debuted the exact same day that this movie premiered on Paramount+. So not only is the movie not very funny or surreal but it’s also a commercial for a lesser SpongeBob spin-off. Considering all of this went down not long after the death of series creator Stephen Hillenburg, there’s a bitter aftertaste for this angle.

Sponge on the Run tries to run with its premise but mostly stumbles. The road comedy finds little to play with that wasn’t more exciting and creative in previous SpongeBob movies. There’s a handful of mildly amusing lines but after this show has been around for well over two decades, you’d expect something a little more than the same old formula.