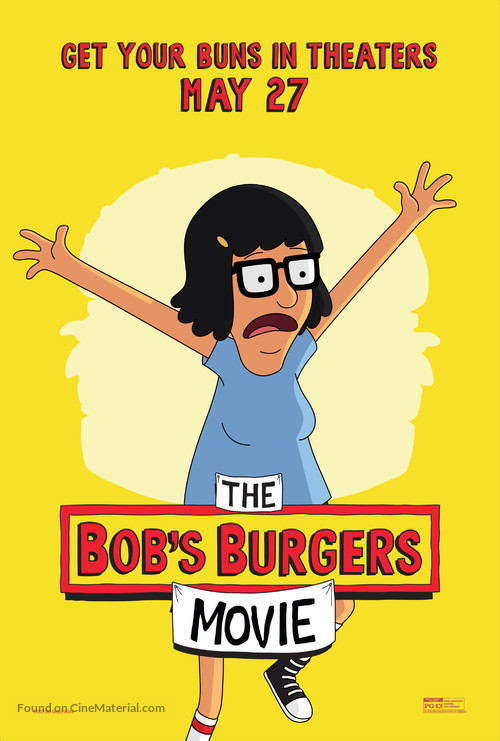 The Bob’s Burgers Movie works okay as a movie even if it doesn’t offer more than the show.

Among the legacy of Fox’s animated sitcoms, Bob’s Burgers has risen as the next hit alongside the long-running fame of The Simpsons and Family Guy. Having run for well over ten seasons, it seemed appropriate and expected for the show to make the leap into a film. But does Loren Bouchard’s silly working-class comedy translate to the big screen? Well, kinda.

The movie presents the same characters as the show but with some decent arcs for all of them. Bob (H. Jon Benjamin) and his wife Linda (John Roberts) are struggling to make their upcoming loan payment and business is not looking good for their burger joint. A recent hole in the ground in front of their business has led to a decline in customers and complicates their financial situation.

At the same time, their three children are preparing for a summer where they aim to change themselves. Tina (Dan Mintz), ever the hormonal teenager, is hoping that her crush Jimmy will be her summer boyfriend. Gene (Eugene Mirman) wants to become a rock star, hoping his latest instrument of a combined spoon and napkin holder will be a huge hit. And Louise (Kristen Schaal) is having some identity issues of fearing being too much of a baby for still wearing the bunny-ear hat.

At the center of this story is a murder mystery. A corpse from many years ago is discovered in town and it’s speculated that his death has something to do with the local landowner Fischoeder and his boardwalk amusement park. While the kids investigate, Bob and Linda try to get their burgers out in different ways. While all of this is going on, there are some musical numbers present to let the increase in the animation budget flex for as much as the Harmony software will allow. Music has always been a part of the show and some of these songs are decently catchy, singing about excitement for summer and the life of a carnie.

The major problem with such a picture is not that it strays from the show. If anything, it doesn’t stray enough. While the Belcher family certainly tackles a much bigger mystery than they would usually encounter in the TV series, their antics feel very par for this course. The experience of watching them on the big screen does little to differentiate from the small screen, making the film feel like you’re watching a handful of solid episodes. It just feels like more of the same without much surprise. So if you were hoping for that one moment that you could only see in a PG-13 movie and not in the Bob’s Burgers show, you’re out of luck.

That being said, there are a handful of charming moments. I really dug how the Belcher kids get lost in their own fantasies of aliens, zombies, and talking toys. Gene’s vision of becoming a rock star is probably the funniest scene for his imagination conjuring up robot aliens who think he sucks. Their response of “I’m not saying we’re going to invade your planet but it’s not off the table” is pretty funny. And yet there’s rarely a laugh-out-loud moment among this cavalcade of comedy ramblings. It’s mostly just smirking and mild chuckles at the common back-and-forth the show was known for.

The Bob’s Burgers Movie works okay as a movie even if it doesn’t offer more than the show. The 2D animation style is nice to look at, the performances are all pretty strong, and the arcs are okay enough where the film doesn’t feel too sporadic. Fans of the show will certainly appreciate how faithful this picture is but those who are only okay with the show may not find much here. In terms of transforming an animated series into a movie, this film is pretty much what you’d expect; replicating what works from the show but rarely veering into new territory beyond higher production values.