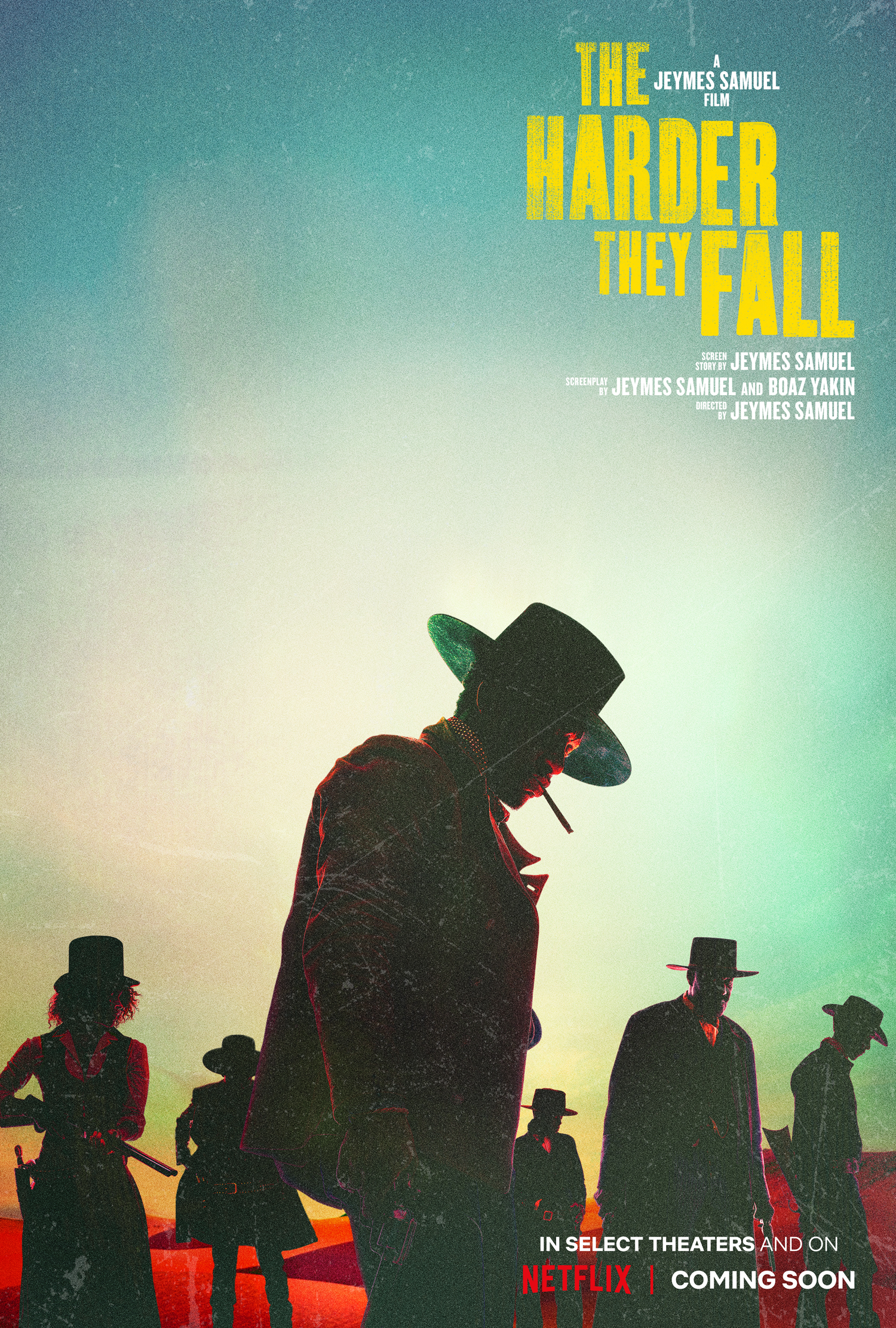 The Harder They Fall is that badass Western that feels like an ode and more of a tune all its own.

The Harder They Fall (2021) Review By Mark McPherson

Revisionist Westerns don’t get much better than this. Jeymes Samuel’s The Harder They Fall is brimming with grit, style, and a tone that’s both exhilarating and introspective. It’s that shot in the arm such a genre needed to lift itself out of the doldrums of either choosing to be mostly mindless displays of grindhouse-style violence or contemplative moody pictures of slow burns. Here’s a film that can have it all and it’s so unbelievably refreshing.

It’s a story of revenge that starts off with a traumatic childhood. Nat Love (Jonathan Majors) grew up mostly alone when his parents were ruthlessly slaughtered by the cruel criminal Rufus Buck (Idris Elba). As a boy, Nat watched as Rufus killed his mom and dad and then screamed out his pain as a cross was carved into his forehead. Nat grew into an outlaw that has devoted his life to tracking down Rufus’s gang and wiping them off the Western landscape. His opening assassination of one member inside a church really opens the picture with a kick.

His quest leads to him firing a few extra guns for the task of taking down such an outlaw. Stagecoach Mary (Zazie Beetz) is a performer with a romantic history with Nat, conflicted about their relationship. Bass Reeves (Delroy Lindo) is a long-time law enforcer who finds himself compelled to work alongside outlaws if it means bringing in the bigger fish of Rufus. Bill Pickett is a cocky sharpshooter who can’t help but jump at the chance to take down ruthless gunfighters. Jim Beckwourth (RJ Cyler) is also skilled with a gun and manages to have quite a bit of luck for working alongside Pickett. And then there’s Cuffee (Danielle Deadwyler), a strong-willed woman who finds herself more at home handling guns than wearing dresses for a bank heist.

Rufus isn’t alone though as he’s got his own gang and they’re quite the ensemble. Trudy Smith (Regina King) is one of the most unapologetically vicious of gangsters. She’ll make daring hold-ups of trains and confront others with a cold look in her eyes. Her backstory is also rather intriguing when divulged during a rather intense moment of peeling an apple. Cherokee Bill (Lakeith Stanfield) has the feel of a voice cowboy but the cadence of a man so vicious he doesn’t feel the need to display intimidation.

The two forces clash as Rufus takes ownership of a town and holds hostages. They have showdowns and bitter dialogues about confronting death and being bound by greed. Elba has his fair share of great moments but it’s really Stanfield who steals the show from his opening commands of a prison break on a train to his commentary on quick-draw shootouts. Majors has a great arc and a keen delivery for an outlaw haunted by the past. His entrance is just too badass. He guns down an outlaw and says to the priest of the church he can turn the body in for $5,000. The priest asks why Nat won’t turn in the body. “I’m worth ten,” he responds before moseying along.

This is an incredibly impressive ensemble cast with familiar names giving fantastic performances. Everyone is a joy to watch on screen, though it’s hard to top the fierce nature of Regina King. You may also notice that the film uses a lot of familiar names in history. Nat Love relates to the slave-turned-cowboy and Cherokee Bill was indeed a figure who terrorized Native Americans. The histories have been changed here because, well, it’s a revisionist Western. The opening prologue, however, sets the tone right. It admits that the story alters historical events but stresses the most important part is “These. People. Existed.”

The Harder They Fall is that badass Western that feels like an ode and more of a tune all its own. There’s the remarkably dynamic direction with the variety of shots, an invigorating soundtrack that isn’t afraid to embrace some lyrical love, and intensity to every scene that left me on the edge of my seat. Few Westerns ever feel this fresh but director Jeymes Samuel has pulled off something amazing that deserves to be saddled next to the best Western films ever made.