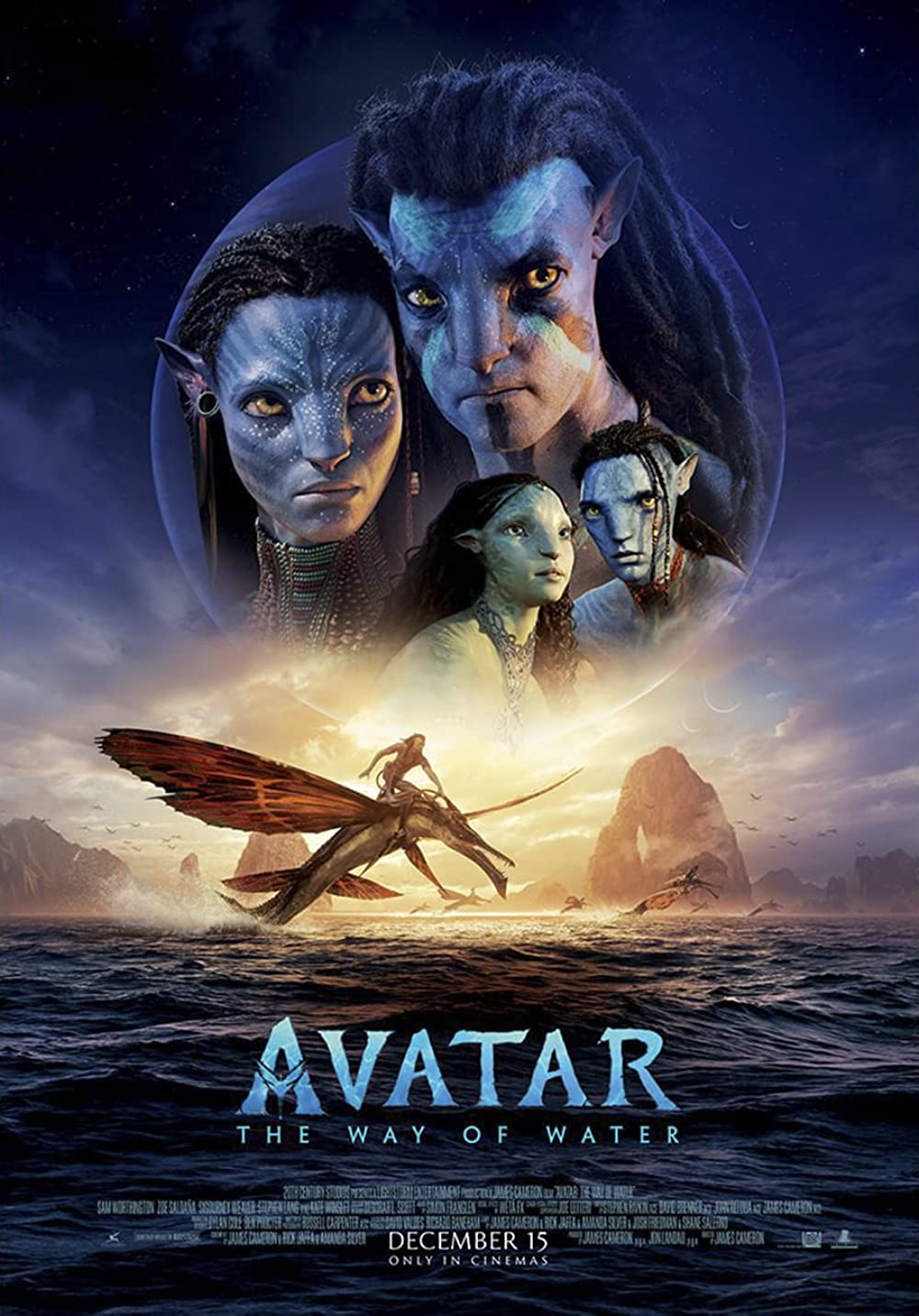 The Way of Water remains just as dazzling a sight as the previous Avatar movie, with an extra dose of aquatic ambiance.

Avatar: The Way of Water (2022) Review By Mark McPherson 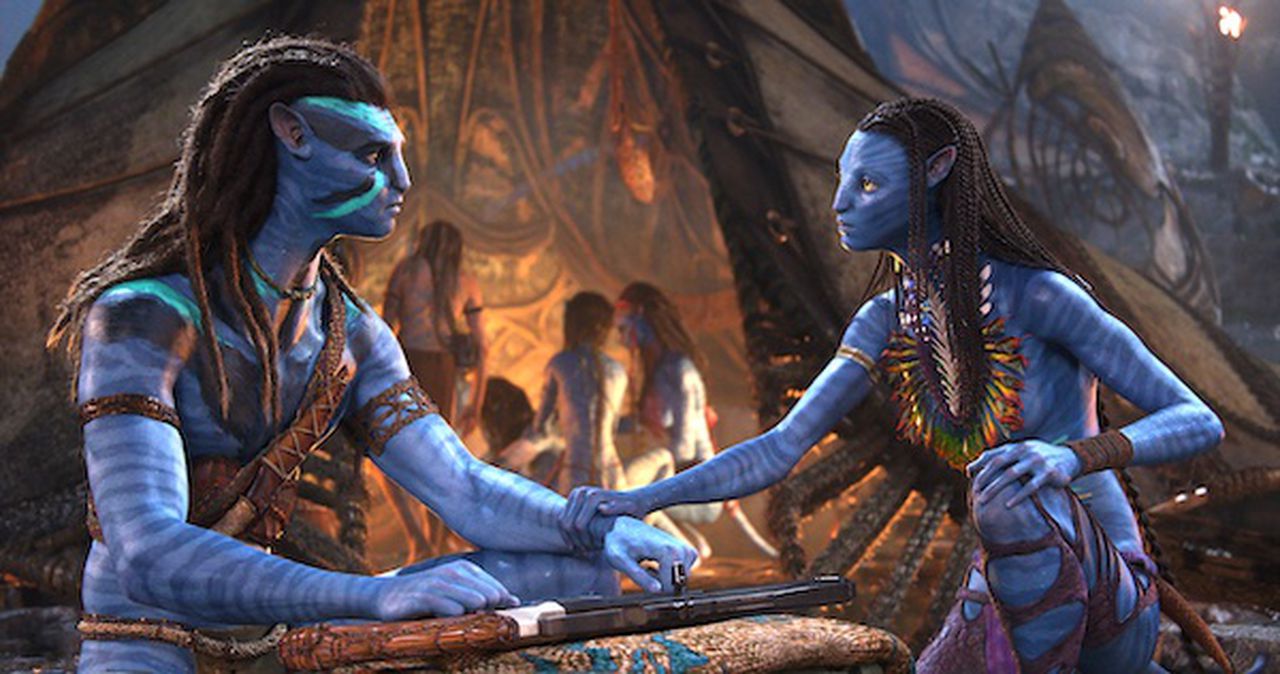 Director James Cameron once again proves how much of a mastery he has with blockbuster cinema. For those familiar with his filmography, it’s not exactly a marvelous revelation that his long-overdue Avatar sequel is a visual feast. It’s another breathtaking dive into the alien world of Pandora, saddled with a standard script and unforgettable imagery.

The film takes place many years after the first film when the Pandoran natives, known as the Na’vi, drove the human forces off the planet. Jake Sully (Sam Worthington) has gotten used to his life as a Na’vi, having married his love Neytiri (Zoe Saldana), raising their children, and leading their tribe to prosperity. So some things have changed. Other elements, however, remain the same. The biggest repeat is that humans have returned to harvest the planet and are more aggressive than ever.

With the humans seeking revenge on Jake Sully and his tribe, the human-turned-Na’vi decides to seek refuge in a water tribe on the planet. This leads to some of the most gorgeous imagery in the entire film. Plenty of time is spent just admiring the beauty of this tribe’s underwater environment. Everything from the glowing school of fishes to the emotional eyes of large whale-like creatures are beautifully rendered. It probably helps to see this film in IMAX 3D with 60 frames per second to complete the allusion.

So much time is spent marveling at the sights, mainly because the script is light, despite having more going on than the previous Avatar. It’s so light that the plot finds ways to throw previously killed characters back into the mix. Sigourney Weaver now plays a Na’vi offspring of her previous character, Doctor Grace. Stephen Lang also returns as the violent Colonel Miles, reborn as a Na’vi avatar to once more lead missions against the natives of Pandora. So it’s the same deal as the last film, leading to a grand showdown between Jake and Miles once more since evil never dies and such.

While it’s easy to dismiss the film as being all spectacle, it’s hard to deny how absorbing the film becomes. If you’re going to make the biggest draw of your film, the special effects, they have to be extra special. Thankfully, The Way of Water succeeds at this towering task in a cinema landscape loaded with CGI all vying to be transcendent with imagination. There are so many moments of wonder that Cameron allows the viewer to be in awe with it all, from the giant fishes of the background or the small plankton gracing the foreground. Notice how Cameron has so many of these great scenes with little dialogue, striving to let the visuals speak for themselves.

In terms of action, Cameron also lives up to his reputation in this department. There’s an explosive climax where Na’vi versus humans in an aquatic war aboard a sinking ship, loaded with gunfire, arrows, and explosions littering the screen with vibrant chaos. The attackers led by Miles are mostly poachers who operate on pure greed, making it all the less concerning to watch the gruesome violence unfold against them. One of the highlights is when the lead poacher experiences an unorthodox limb loss.

For as brazen as the fourth act becomes, it does a decent job wrapping the many plotlines together. We see Jake’s children learn hard leadership and teamwork lessons. We get to see Neytiri fight with a fearsome fury for being protective of her children. We get to see the oneness of nature play a bigger role in embracing nature while sticking together amid discrimination of diversity within Na’vi. While these elements don’t feel as explored as they could’ve been, they make for solid dressing on top of the eye-popping allure of this presentation.

The Way of Water remains just as dazzling a sight as the previous Avatar movie, with an extra dose of aquatic ambiance. James Cameron has again crafted a remarkable and iconic cinema world worth returning to for the whole experience. While not one of the best films of the years, it’s certainly one of the best theater experiences for being treated to a sci-fi world, warranting the bells and whistles of appearing in 3D IMAX.