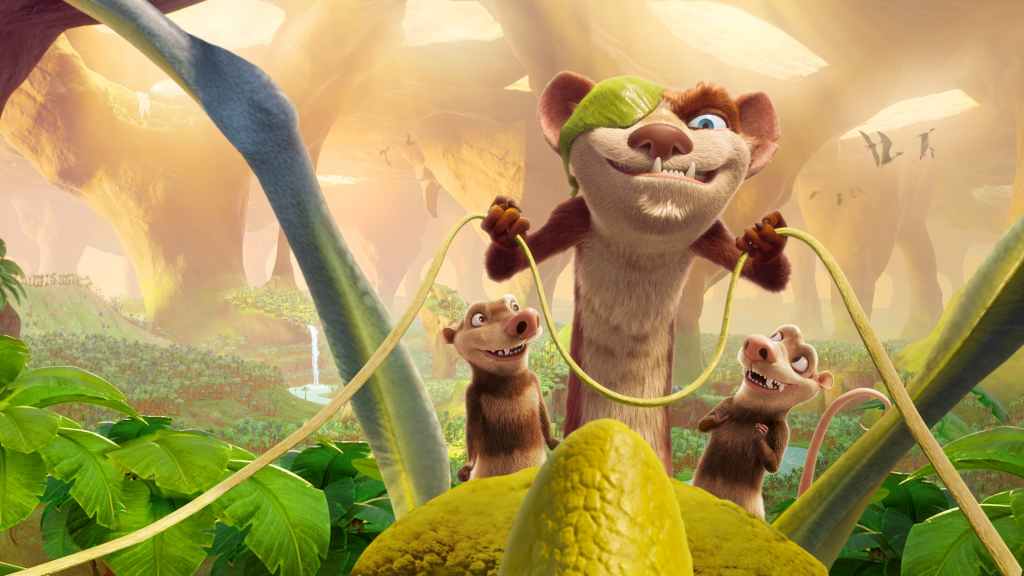 Once more into the Ice Age movies, we plunge, marching further and further away from the original’s pleasing buddy adventure. I hate to lavish on the past but I recall one interview from the team who worked on the first movie about how they sought to stage the prehistoric age. When designing the various creatures of the wooly mammoth and saber-tooth tigers, a plea they heard from scientists was that the film did not have dinosaurs. We’re long past that point now, with dinosaurs having been introduced three movies ago. We’re long past the original characters as well who barely occupy this sequel that is more of a spin-off than anything.

Even the very title of this sixth Ice Age movie is a lie. It is true that the swashbuckling weasel Buckminster "Buck" Wild (once again voiced by Simon Pegg) does go on an adventure but he’s not so much the main character. Instead, the majority of the film is occupied by the Heckel-and-Jerkyl style duo of Crash and Eddie (Vincent Tong and Aaron Harris), two annoying possums who can’t stop with the dancing and who's-on-first gags as they attempt to prove who is more aggravating. The two hang around the familiar characters of Manny, Sid, Diego, and Ellie but are still looked down upon for being so dependent. Seeking to prove themselves, Crash and Eddie set off on their own to prove they don’t need the help of anyone else to survive in the dangerous prehistoric world.

It almost seems like the film realizes these two can’t carry a film by throwing Buck into the mix. He happens upon them when they stumble back into the underground Lost World of dinosaurs and are given a villain to best. A super-intelligent triceratops, Orson (Utkarsh Ambudkar), has taken control of the dinosaurs and aims to take over the Lost World with its many dangerous dinos. So Buck has to stop him but Crash and Eddie will ultimately end up being the heroes, proving to themselves and their friends that they not only survive but save the day.

There are very few laughs from this comedic adventure, especially when Crash and Eddie crash and burn when trying to make pop culture references to cheerleaders and breakdancing. Honestly, can you even remember the last animated movie you watched that tried to make these types of jokes? The film isn’t just set in prehistory but the very writing seems as though it’s stuck in time as well. The villain of Orson just feels so generic, being a mere evil genius in exile with dreams of domination most mundane. His performance is lukewarm and he doesn’t even land one knowing jab or intelligent jolt to an otherwise routine and tiresome script of slapstick.

This is the least Ice Age of the Ice Age movie considering nearly all of the original voice cast is gone. Ray Romano’s deep voice of reason is replaced by the lackluster impression of Sean Kenin Elias-Reyes for the role of Manny. John Leguizamo’s bucktoothed cheerfulness as Sid is filled in by Jake Green who can hardly hold a candle to Leguizamo’s earnestness. Denis Leary’s snarkiness has also left the building as Skyler Stone struggles to match the voice of the tiger Diego. And while Queen Latifah never felt like the biggest presence as the mammoth Ellie, you can certainly feel her absence when she’s now voiced by Dominique Jennings.

This latest Ice Age movie proves that the franchise should’ve gone extinct long ago. With an uninspired script and an absence of returning voices, all of the magic is gone from this series. It’s enough to make you wish one of those apocalyptic events the characters tried to avoid would finally kill them off.