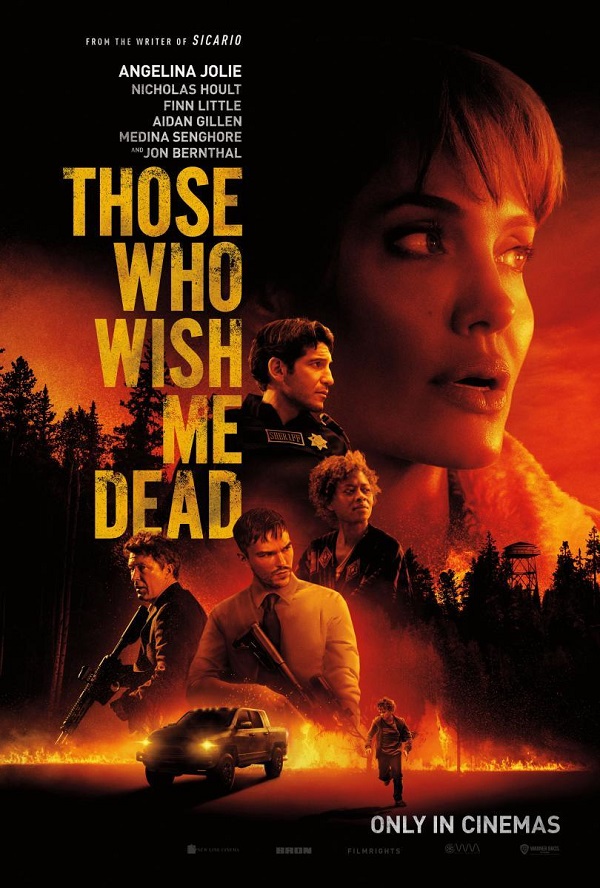 Those Who Wish Me Dead is a thriller with strong ingredients that take a while to mix together into something exciting.

Those Who Wish Me Dead (2021) Review By Mark McPherson 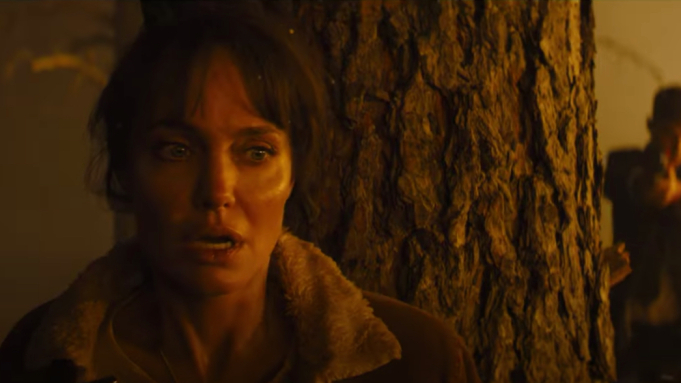 Sometimes a thriller just needs a little something extra to spice things up. We’ve seen the whole child-in-danger thriller before, where one kid learns the truth and flees from gun-toting bad guys. But throw in a forest fire and now you’ve got an intense setting. This alone doesn’t make Those Who Wish Me Dead a compelling tale but it does at least keep the eyes glued open throughout.

So we have another story of the down-on-their-luck protector and a terrified kid on the run. The protector is Hannah (Angelina Jolie), a veteran smokejumper who is haunted by that one wildfire where she wasn’t able to save everyone. The kid is Connor (Finn Little), the son of the dad who found some illegal dealings in his accounting and has become the target of assassins. What Connor learns is merely confined to a note from his father (Jake Weber) and never read by anyone except Hannah. All you gotta know is that it’s juicy and worth killing someone over apparently.

The assassins are a father-son duo of the cold Jack (Aidan Gillen) and his semi-conflicted son Patrick (Nicholas Hoult). They don’t exactly have the greatest dynamic. Jack speaks in a condescending manner to any and all around him, taking great joy in terrorizing and burning places to the ground. Patrick mostly just follows orders but looks on with the wheels turning that maybe it’s going too far when your business involves killing kids. Sadly, no arc comes for Patrick so he can succeed his father and graduate to becoming the villain who gets the extra crispy death.

Hannah is at least an interesting character for having been haunted by the past and staggering around in a drunk and brash stupor with all the other veteran firefighters. When around friends, she’s a slick-talking partier who enjoys such wild acts as launching parachutes off moving vehicles. When alone, her mind drifts back to that one day another smokejumper didn’t make it and a family was caught ablaze. Don’t worry if you miss it from her opening nightmare. It occurs at least two more times with no new information.

Connor, however, is not much of a character, acting more as the vessel of innocence. He cries when facing the hard part of survival and coming to terms with the death of his father. He insults when he feels he is being threatened by Hannah. He smiles when she makes jokes. Connor has so little development that his early displays of a character come off baffling. Sure, his opening scene of struggling to talk to girls seems typical and could’ve been a decent progression for how he comes to Hannah for help. But what are we to gain from a scene when on the road with his father and he inexplicably starts petting a horse in a field? That he’s kind and trusting of gentle souls? That seems more like a scene from a David Lynch movie and less so one for a more grounded thriller.

The first act is a bit of a slog in that it takes quite a bit of time to establish the characters, despite the likes of the assassins and Connor being as trimmed-down as possible. The stories of Hannah and Connor remain so separate throughout the first act that the connection between them seems inexplicably pushed by a last-minute acquaintance. That connection happens to be a country-living couple of Sheriff Ethan Sawyer (Jon Bernthal) and his pregnant wife Allison (Medina Senghore). They’re a welcome addition considering they have a lot of grit and warmth that it’s easy enough to root for them when they’re essentially the cavalry. I must admit that I didn’t expect Allison to be seen in this film riding on a horse and shooting a shotgun and was pleasantly surprised to see such a sight.

Those Who Wish Me Dead is a thriller with strong ingredients that take a while to mix together into something exciting. Thankfully, by the second act, the film mostly finds its groove by the time the obligatory set piece arrives of Hannah savaging assassins while the forest burns around her. It’s not exactly the most memorable of thrillers considering the catchphrase of the villain is “I hate this place” but there’s just enough intensity and pathos present to always be engaged.