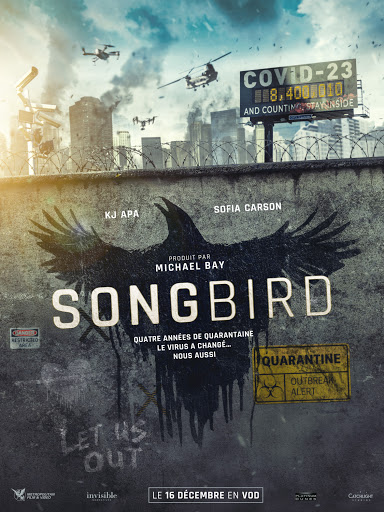 To call Songbird a film that came out too soon would be too easy. 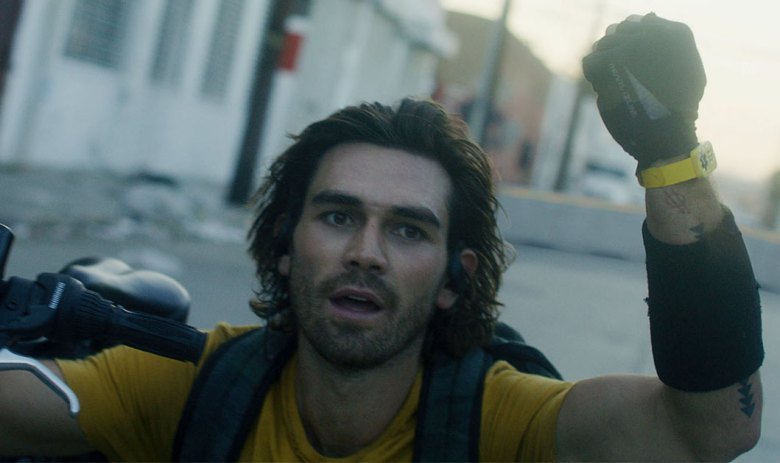 To call Songbird a film that came out too soon would be too easy. But having been released in the fall of 2020, while the pandemic was reaching its height in cases and deaths, it absolutely was the wrong time to release a Coronavirus thriller. It’s not that speculative fiction on this topic can’t work or that even featuring this virus in the media is taboo. But, wow, does Coronavirus send out the wrong message in its dystopian tale weaving in the Coronavirus into its narrative with perhaps ambiguous intent in ramping up paranoia.

Set in the year 2024, the film finds Los Angeles has remained under quarantine and lockdown presumably since 2020. Covid-19 has now mutated into a strain so deadly that it can infect the brain and kill someone within 48 hours. Martial law has been declared to contain the virus. Those infected are rounded up into a quarantine camp where they will die. The only ones allowed to break the lockdown curfews are those who are immune and they apparently have to work as couriers to survive.

The film leaves a lot of unanswered questions about this dystopian future. What is the state of developing a vaccine? How is the rest of the world handling this mutated virus? What pushback has there been for such totalitarian rule and has it spread throughout the country or just in LA? These would seem like very important questions to ask in determining just what the film is saying about the pandemic. However, it becomes painfully clear that the film is not interested in saying anything of value about the pandemic and really just wants to ride the trend train by throwing a run-of-the-mill adventure thriller into such a setting.

What’s even worse is that the film individualizes the issues to such a degree where it lacks thinking critically about anything societal being portrayed on screen. Nico is an immune courier who is struggling to acquire a special tag for his quarantined girlfriend Sara. He doesn’t have a specific location in mind to escape, described vaguely by him as somewhere else. From the looks of the ending, it appears to be the same place at the end of the theatrical cut of Blade Runner where there are lots of trees and water.

Holding up Nico’s quest are the elites who control everything. Emmett is in charge of the LA “sanitation” department and appears less like a government worker and more like a Die Hard villain. He struts around in a snazzy suit, smoking his cigarettes and cackling at the people he gets to throw into camps. He loves his job so much that he can apparently get away with murder by literally gutting people he thinks might be infected. He’s such a generic bad guy that there’s so little revealed about his position and why he’s enabled. He just likes power, I guess.

William Griffin has a bit more character as a record producer who gets involved with illegal dealings to keep his rich family safe. However, he is also portrayed as a cartoonish bad guy the way he cheats on his wife by sneaking out after curfew to sleep with a prostitute. No, not just a prostitute, but a Covid themed prostitute who wears a face mask and face shield as though it were some fetish. If that scene of her dancing seductively with a bedazzled face shield seems like it’s in poor taste, it’s because it is.

While we follow a few characters here and there, the majority of the movie is just Nico and Sara trying to escape LA. The clock is ticking when Sara’s rooming grandmother becomes infected with the Coronavirus and her apartment is placed on lockdown. Nico makes a mad dash through the city to acquire bracelets that’ll allow them to escape and dodging gunfire from the totalitarian state. More questions than answers arise as the film keeps going, favoring more shaky-cam sequences and bitter feuds than anything of substance about this world.

Songbird doesn’t work on any level or in any year. The ensemble casting, while strong, leaves no room for characters past being mere ciphers for another escape-the-city thriller. The dystopian future is so ill-defined that it’s baffling how any of it works without filling in the blanks via current events. Of course, the most apparent and ugliest aspect of the film is what stirs up about the pandemic, suggesting that the government is more dangerous than the Coronavirus. Such a film could work but requires far more insight for being rushed into production so quickly without taking note of the situation.

The film’s writer and director stated that his script was originally going to be somewhere between a Cloverfield monster movie and a class-divide commentary. His vision soon mutated into chasing the trend of the year and shamelessly touts itself as a watered-down Purge with an ugly take on drawing from the real world. The film ends on a hollow note of hope that one day we’ll all be together again, that the Coronavirus will be something placed behind us. Hopefully we can place this film behind us as well.