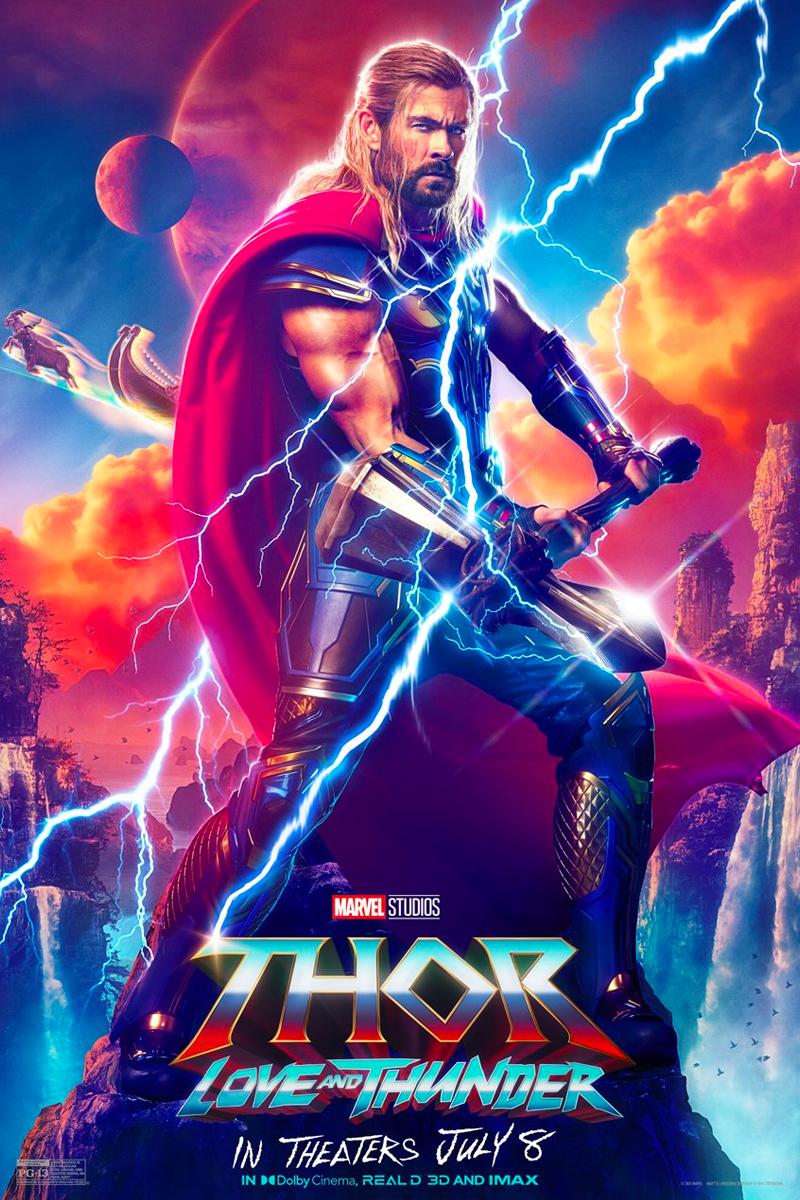 While Love & Thunder is not the worst Thor movie, it’s certainly one of the weaker ones for not landing as heavy a punch. 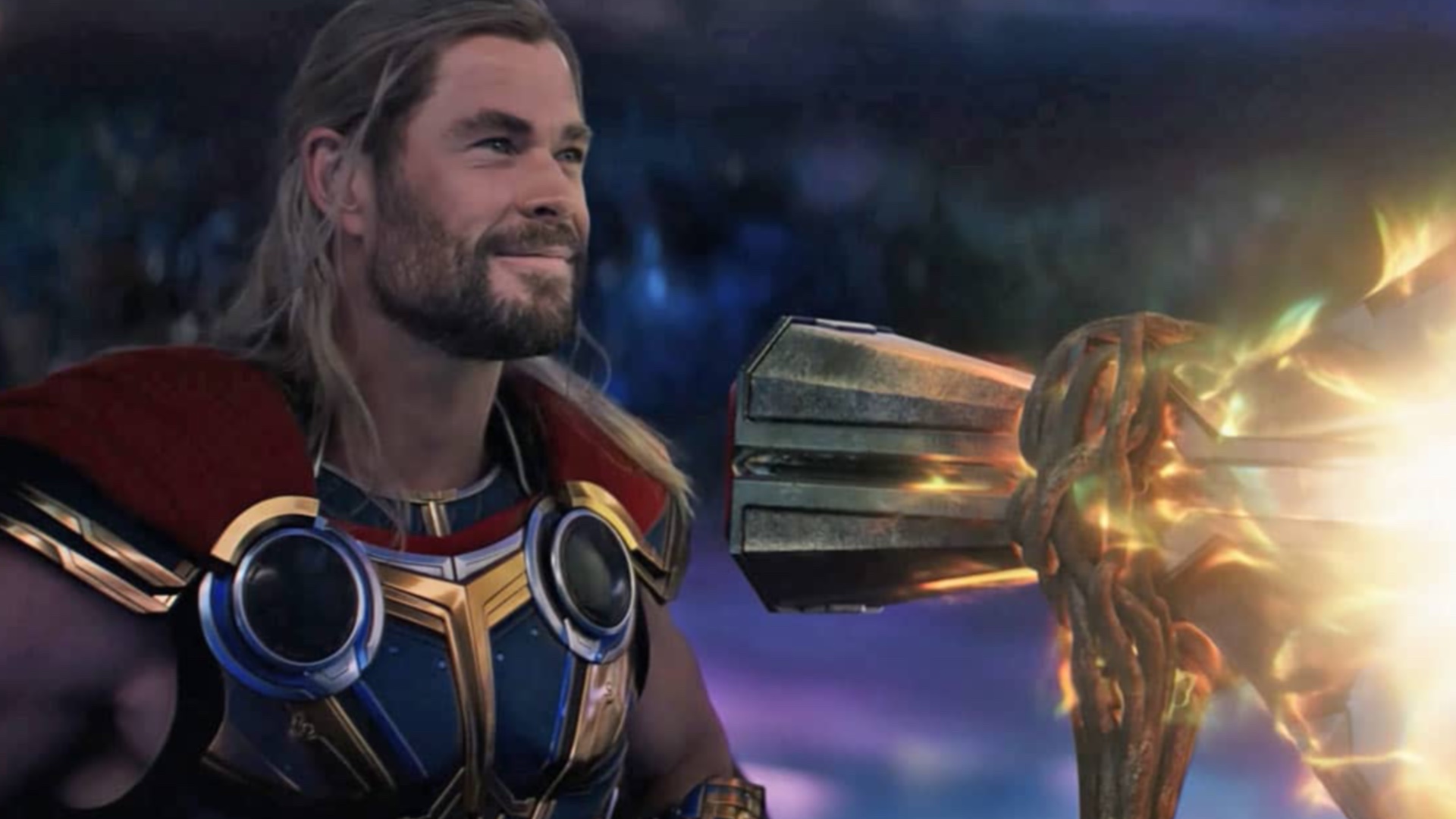 As the fourth entry in the saga of Thor, Love and Thunder has the same cockiness as the titular hero. In the same way that Thor thinks far too highly of himself, here is a film that relies on the same old tricks that made the previous Thor film, Ragnarok, such a trailblazer. It falls back on so many familiar elements and moments of punctuation that even the greater themes of eternal peace and love feel more hollow than they should.

Perhaps the problem is that the prologue sets our expectations through the roof. Christian Bale plays a religious follower who is wandering through a desert, hopeful that the God he prays to will heed his prayer and save his daughter. Not only does his daughter die but the man is then confronted by his god who essentially tells him his worship was all for nothing. Angered by the cruelty of gods, the man assumes the title of The God Butcher and goes on a killing spree of gods across the cosmos in search of finding the eternal treasure of happiness.

Not a bad villain and Bale’s performance certainly makes for a highlight of Thor’s rather lacking rogue’s gallery. Thor himself, reprised by Chris Hemsworth, is not as interesting and it’s mostly for him going back to classic Thor. He loses some weight, gains back his spirit by fighting alongside the Guardians of the Galaxy, and is presented with a smaller mountain to climb to find someone to fight for. Of course, that certain someone is Jane Foster, reprised by Natalie Portman for the first time since Thor: The Dark World way back in 2013. Now she gets to jump into the action by assuming a magical force that lets her replicate the same powers as Thor.

If you’re wondering how Jane harnesses this power, you may not receive the answer. In truth, there are a lot of stumbling edits in the first act of the film as it struggles to find the path it wants to take. Aspects lingering from Avengers: Endgame is she'd rather quickly with Thor’s weight having been lowered montage style and the Guardians of the Galaxy only being present for a simple mission for Thor to flex his stuff on alien worlds. We get a lot of callbacks such as Thor’s life once more being replicated in a campy play format. Even the more original gags wear out their welcome fast, as with the screaming goats Thor inherits for his journey which pretty much just screams a lot.

The comedy doesn’t feel as refreshing this time around considering the adventure at hand. Valkyrie, reprised by Tessa Thompson, takes a leadership role with the Earth home of New Asgard but is mostly present to seek purpose for her future in a side-story that more or fewer peters out. Korg, the comical rock monster of the previous Thor movie, returns to deliver some dry wit with few lines that hit as hard as his punches. It’s strange that some of the best laughs come from God Butcher and mostly in moments where it feels like director Taika Waititi is letting Bale have some clever fun with the character.

What the film ultimately wants to be about is legacy and love, trying to find some way to accept death and seek a reason to live another day. That’s some heavy stuff and it thankfully hits a rather heartfelt crescendo. That finale, however, also comes bundled with a mildly silly moment where a whole bunch of kids beats up shadow demons with their lightning-powered weapons, including a stuffed animal. Still, I did feel for Butcher and there’s some tragedy behind Jane’s leap into superheroism.

Where the film shines best is in its visuals. We get some incredibly colorful moments such as Thor riding a magical boat through space to watch dolphins swim through rainbows. The darker side of the galaxy is also rather unique for its lack of color, coming only in bursts of magical weapons. Even the grand finale of the transcendent imagery hits pretty hard. It’s just a bit of a letdown that the abundance of action scenes never becomes equally as compelling, some of them becoming lost in their staging. Consider the scene where Thor and company confront Zeus (Russel Crowe) in his court of gods, where there is simply too much going on to fully appreciate the boisterous bravado of the overweight and bureaucratic god.

While Love & Thunder is not the worst Thor movie, it’s certainly one of the weaker ones for not landing as heavy a punch. It does better explore the relationship between Thor and Jane while also finding a firm thematic focus on what it means to live a life of love. But it also doesn’t carry nearly the same brevity and boldness of Ragnarok, especially when considering that shadow looms over this sequel for the entire first act. All of this makes the progress of Thor feel more standard than exciting with where this film ends up.