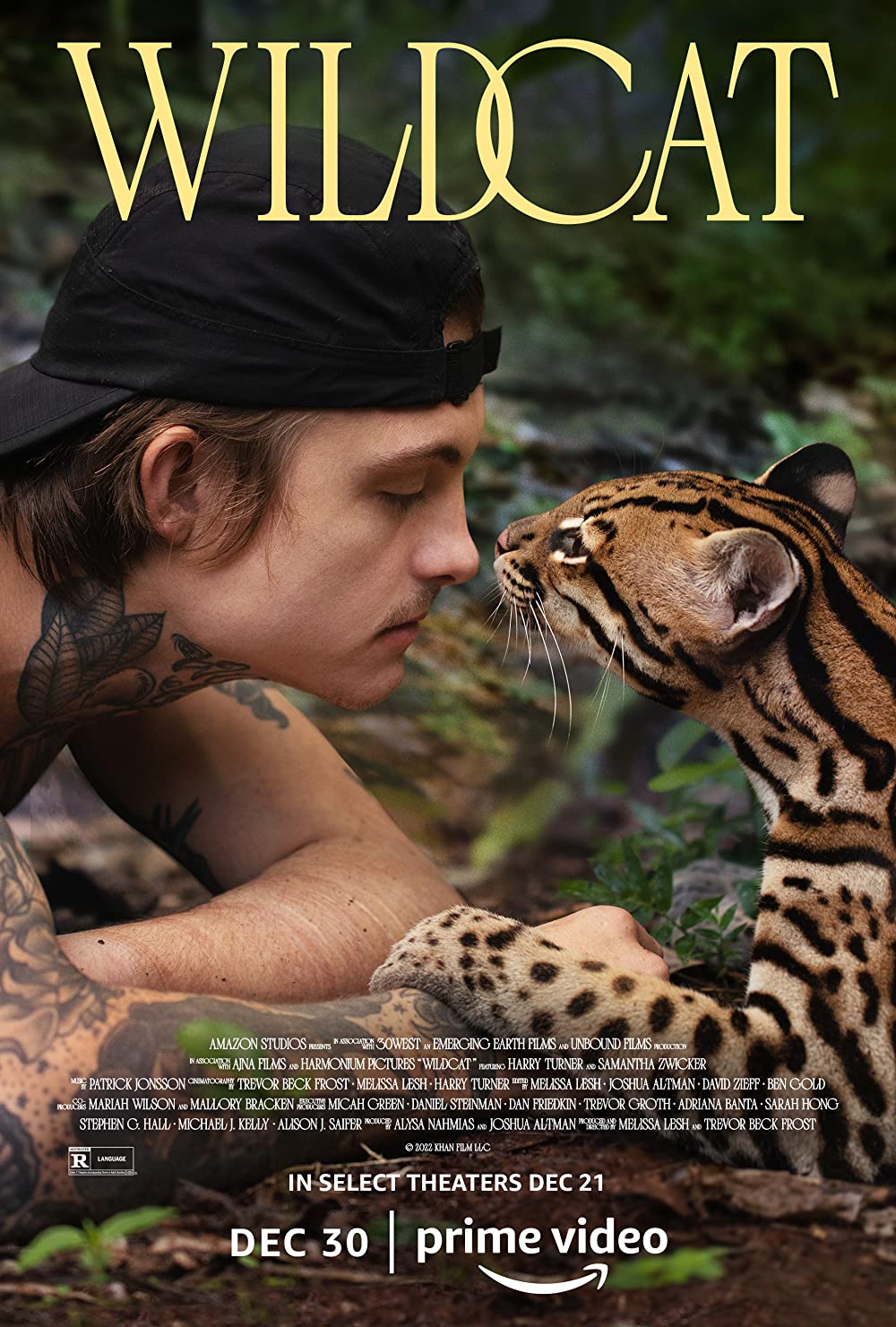 Wildcat is not an easy documentary, but it’s overflowing with humanity, the most honest and sobering.

I can’t speculate if directors Melissa Lesh and Trevor Frost were aiming for a different kind of movie when they started filming the documentary Wildcat. From the start, it would seem like this story could be a heartfelt one of a veteran trying to reconnect with nature and humanity by caring for the ocelots of a jungle. It becomes pretty clear within the first few minutes, however, that there is a darker story to tell here beyond tracking the life of an ocelot being trained to be a wild animal again.

The movie centers on the former soldier Harry Turner and his time in the Peru jungle. Aiming to bring kindness to the world, he cares for ocelots without parents and is trapped by poachers. Life seems to hold more meaning for the emotionally damaged Harry, who was haunted by witnessing children dying in battlefield situations in the middle east. He doesn’t get much comfort when the baby ocelot he cares for dies young after his leg was severely wounded in a trap. A bitter and tearful Harry struggles to continue, even with his girlfriend, Samantha Zwicker, working alongside him.

Soon, Harry dares to care for a new ocelot baby. This one does survive, and Harry forms a strong bond with the little feline. Impressed with how well the cat develops, Harry becomes far more emotional when caring for this creature. He cries when the cat is in good health and even harder when his best feline friend suffers some paralysis from a spider bite. The relationship seems to mend some of his PTSD problems, but they can’t ward off these thoughts forever. Eventually, the ocelot will have to live in the wild. Making that slow divorce is the hardest thing for Harry and leads him to nearly committing suicide, his original intent for traveling to Peru.

The film is equal parts nature documentary and biographical drama on the nature of PTSD. We get to learn about the histories of both Harry and Samantha, both of them having troubled pasts that are returning to haunt them. We watch as the ocelot grows and matures, becoming the wildcat he was meant to be. The darkness of Harry’s cutting himself is explored, and his family becomes involved to give him more hope. It’s a shocking story for watching how Harry crumbles in his will to survive and all the more inspiring when he finds ways to carry on.

It’s astonishing watching the footage captured on this adventure in Peru. The footage of Harry and the ocelot is cute and intoxicating for the struggles of teaching a wildcat to be, well, wild. The many candid moments of Harry arguing with Samantha are heartbreaking, revealing the true horrors of PTSD that are not as well explored in most documentaries. Hearing about former soldiers killing themselves is one thing, but to hear one talk about the necessity of feeling something through cutting feels like a part of this film that needs to be seen.

Wildcat is not an easy documentary, but it’s overflowing with humanity, the most honest and sobering. As the opening of the film states, this is a film mainly about PTSD and suicide that gets rather dark quickly. If you’re willing to take that trip into the darkness, however, there’s a beautiful light at the end of this tunnel, leading to Harry making the world a little bit better for himself, his family, and an ocelot. And, in case you’re wondering, this ocelot does go on to have a healthy life in the jungles of Peru.