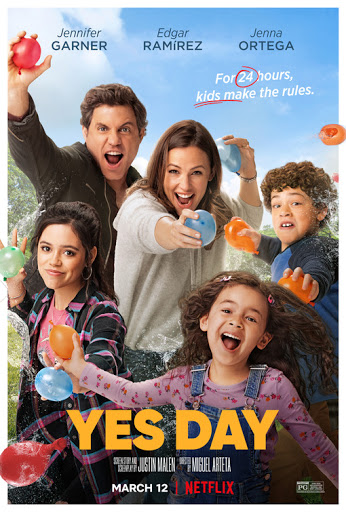 
Yes Day is one of the trimmer family comedies where slapstick antics and messy explosions come guaranteed at the door. Within the first few minutes, we already have a chaotic family that is constantly feuding, always busy, and prone to being clumsy. The middle child, being big into science, attempts to create a volcano at the breakfast table. The volcano explodes at just the right moment but it’s too soon for the film. Movie logic dictates that we’re in for a bigger explosion later on. Sure enough, Yes Day doesn’t disappoint.

The premise alone is built to telegraph all sorts of wacky hijinks. Allison (Jennifer Garner) and Carlos Torres (Édgar Ramírez) find that their three kids are starting to resent them for all the boundaries and rules they have in place. Their kids include the aggravated teenager Katie, the science-loving son Nando, and the youngest and chipper daughter of Ellie. Trying to improve the trust with their children, the Torres family agrees that for one day the parents will never use the word “no” for something that is possible and not against the law in their household. There’s not a lot of hard studies on such a concept but it sure is pitched as a viable excuse to let the kids go bananas with the adults present.

There’s a certain shamelessness that comes from such a concept that makes it all the more appealing than the myriad of other comedies where pratt falls and ridiculous pranks are abundant. And I’m mostly all for it considering there’s not a whole lot of meandering setup to get the obvious money shots of such a film. The audience viewing this picture is mostly streaming for the promise of the adults in odd outfits and the kids taking control of the household.

The requests start fairly simple. Ellie wants to give mom and dad a makeover, turning them into rejected costume designs from We Are Heroes. The kids make their parents engage in an ice cream eating challenge where either puke or poop is promised. The demands of the children become grander when they’re asked to engage in a massive Kool-Aid balloon fight and take a trip to a theme park. Of course, something will go awry and the kids will soon have to learn the obvious lesson that rules are there for a reason.

A film such as this could be so easy to lose its way in the fog of a silly war between adults and their children. And yet the film never tries to make either side too cartoonish in their ways. Sure, Allison is initially posed as the bad guy for always saying no and Carlos the good guy for secretly saying yes. Both learn to not only expand their vocabulary but become better parents. And the pendulum doesn’t have to swing so wildly in the other direction to accomplish this. Carlos doesn’t have to take on the mantle of the bad guy when it comes to breaking up the party and actually takes charge in a rather calm manner. Likewise, Allison learns to be a cooler mom without being the imposing parent, while still being there when Katie will need her most.

Are these situations believable? Absolutely not. In fact, the film steers straight north into Adventures in Babysitting territory when Allison and Katie attend a H.E.R. concert where the singer invites them both up on stage to sing along with her. It’s also highly doubtful that any parent would ever succumb to something as daring as going through a carwash with the windows down. It’s all absurd, where the Kool-Aid balloon fight is treated as an epic war with slow-motion and bullet-time effects out in full force.

Yes Day is not going to win over any other audience than the parents with young kids who are looking for some simple fun and childish gags, neatly packaged with a moral by the time the credits roll. The film plays its role well and, though I never found myself laughing at such hijinks, I was never aggravated by it either. It’s a more innocent slapstick comedy for families and is a bit more inventive and playful than most films of this subgenre. It comes so close to breaking out of its simplistic box that it's almost a tragedy it comes off as little more than a decent dose of humor aimed at the younger crowd. Kids will certainly get more out of this picture than the adults who will probably keep shaking their heads every few minutes when their children ask if they can have a yes day.